I love Indonesian food. I’ve been exploring the cuisine for a decade or more now. I love it because I’ll always find a noodle dish to crave.

The jump mien at Singkawang Cafe in El Monte was such a pretty dish. There are fish balls, fish cake, shrimp, pork over a bed of dry noodles.

We ordered so much food that I think the server felt obligated to give us something for free. He gave us this simple but yummy pork soup. It reminds me of going to restaurants with my parents and we always had free soup (plus rice and tea). It’s the little things.

Singkawang also has a Thai menu. A friend got the crispy pork and Chinese broccoli. I always find this dish at Thai restaurants a bit odd. The pork belly is invariably fried so much it’s just… pork chips. This was no different but I do like there was plenty of of greens.

They later told us they had a Thai restaurant and so they carry some of the favorites from that menu. 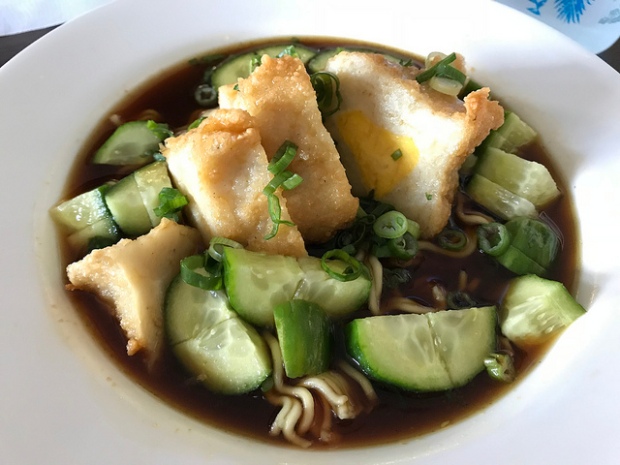 Empek empek (aka pempek) is a fish and tapioca cake served with a tart vinegar sauce and cucumber. I was intrigued by the noodles but was getting from all the carbs we hard ordered. When it’s stuffed with an egg yolk, the pempek is nicknamed a submarine. It’s a very Indonesian dish.

The menu had morning glory (aka Chinese tong choy or kang kong). The supplemental menu had other veggies like bean sprouts. But let’s be honest, bean sprouts are filler. So we went with morning glory. Yum, these were done well with fried garlic.

I’ve been craving laksa for a while. Though let’s be honest, it’s probably one of my favorite noodle soups. This one featured flat rice noodles which was different for me. Sadly the shrimp was mushy. However, I could almost forgive them because the curry soup was gently spicy and I did like the tofu puffs and dish overall.

Our friend wanted to get fried rice. This one was a winner. The shrimp weren’t as mushy and the rice had lots of flavor.

Our friend Gourmet Pigs ordered martabak for us to share. This stuffed cake was a great dessert after all our food. It’s a street food commonly found in Indonesia but later I learned it’s also popular in the Middle East as well and sometimes stuffed with savory ingredients.

I want to try more Indonesian food. The supplemental menu doesn’t have photos or or descriptions so it’d be fun to randomly order stuff to try!