Mid-City: Trying Out Plant Based Vegan Nic’s on Beverly

Nic’s on Beverly opened earlier this year. The new vegan restaurant serves up plant based items such as falafel burger, avocado on crispy rice, tagine and soon-to-be iconic Chinois salad (Chinese chicken salad without the chicken).

I hope as we move towards winter (well, after this 95 degree Autumn we’re having!?), the Point Break snow cone stays on the menu. It’s so refreshing. 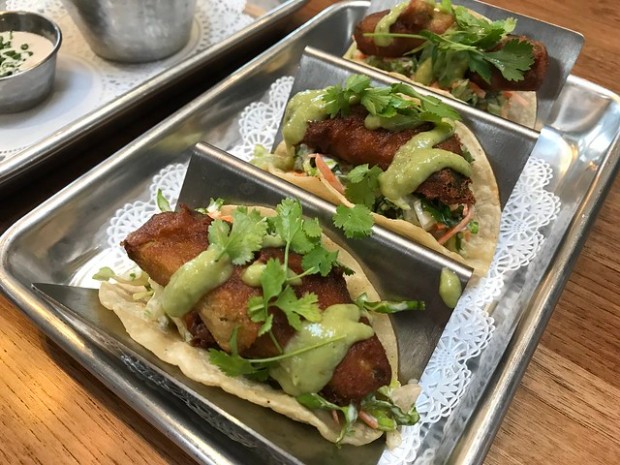 I had the avocado tacos during friends and family months during opening and I’m glad the recipe got tweaked. I love these now. The sauce is wonderful.

This mezcal horchata drink has had a few different names but I like Enter the Dragon the best. It’s luscious and surprisingly creamy — that’s right, even drinks are vegetarian. There’s no dairy at all. 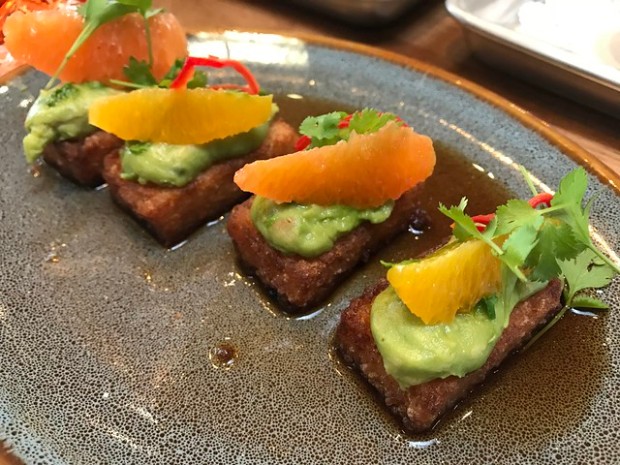 One of my favorite things is spicy tuna on crispy rice. Yes, it’s a little basic but it’s really great when done well. Nic’s take on it is using avocado. While I’m a big believer in avocado, this didn’t quite do it for me. The avocado tacos work much better.

the one that says, bad motherf*cker, on it

The menu says the “The One that says, ‘bad motherf*cker’ on it” is if a Negroni and Old Fashioned had a love child, this would be it. It’s whiskey based. I get it every time I go to Nic’s. If you love brown, bitter, stirred, this is the one for you.

I’ll have to try the crispy maitake mushrooms again. These in theory were a great idea. But I prefer my vegetables non-crispy sometimes. I recently have been trying all the different “chips” made from veggies; beets, kale, etc. And I realize I just love fresh vegetables.

Salads are always about dressing. Yes, this is a bold statement. And I think the ginger in this Chinois also makes it.

I’ve been to Nic’s on Beverly several times. And while a certain newspaper in town didn’t love the Chinois or the tagine, I enjoyed both. Those were the two items I was looking forward to after a few visits. As a meat eater, I do appreciate what Nic’s is doing. It’s not trying to match the meat based version of the famous salad. And I’ve had a few beans/lentils/legumes stews that are deeply satisfying. This tagine reminds me of that.

I have not been to Nic’s with a vegan or vegetarian friend so perhaps their opinions may matter more. Several years ago, I was surprised to learn all the plant based burgers on the market were not marketing to the vegan/vegetarian crowd. They were in fact trying to persuade meat eaters to eat less meat.

And you know what? I think they succeeded. If we all eat a little less meat and some more veg, perhaps we’ll all be healthier. I believe it’s about balance. And while veganism isn’t my lifestyle, I don’t mind eating plant based every now and then.