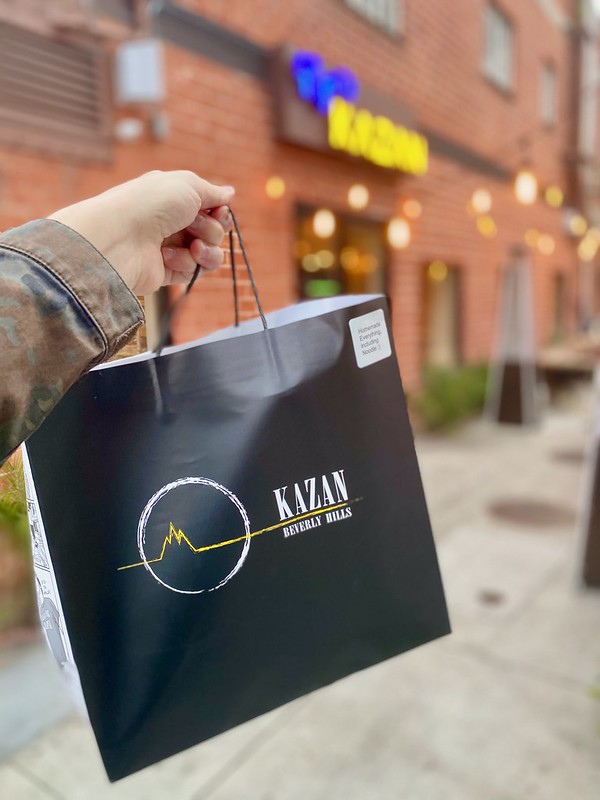 Kazan opened earlier this year, right before the pandemic started. I was going to go try them out as I love Tatsu ramen and the chef there started this new spot highlighting Japanese soba noodles.

We went to get takeout from Kazan and got edamame (soybeans) and shrimp tempura for appetizers.

I loved that the menu said edamame goes great with beer! And since we were so close, the tempura was still crispy when we dug in.

I chose Kazen’s original soba for myself. This includes chashu pork and wontons made in house in a light broth. The chicken broth is soy based with truffle seasoning. For my friend I chose the vegan bowl which had tofu. The broth is mushroom and kelp based. He really enjoyed that one. The noodles are perfectly chewy and I can see Kazan being addicting.

You could also get the original soba in a salt based broth if you prefer shio over soy.

When we’re allowed to dine in restaurants again, I’d love to eat there and try the teriyaki chicken soba and lamb one. The lamb one sounds spicy since it’s called lamb in lava!

← SGV: Sandwich Cravings from Banh Mi My Tho in Rosemead
SGV: Getting Indian Takeout from Curry Time in El Monte →