Several weeks ago, the buzz surrounding Tar Pit reached me. I knew I had to check it out to see for myself what these fried oysters were all about. But first, we decided to go to Cube for dinner then dessert (dessert oysters per DJ Jewelz and the Delicious) and drinks at Tar Pit.

I originally made reservations for three but Cube graciously accommodated my request to up the reservation so we could include Carina from the UncouthGourmands and LA Easy Meals. What they didn’t tell me was they were going to give me a private room where they keep their wine. Sarah from the Delicious Life called it the Mafioso Room. Yeah, we foodies, uh, food bloggers, um, I mean, writers-who-like-to-eat know a cool room when we see it! Plus, it probably was good since four of the five of us decided to take pics. And more pics. 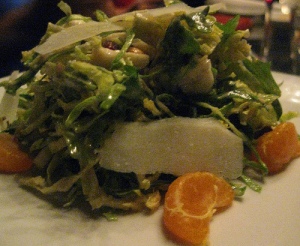 Ordering was surprisingly easy. There were certain things I wanted to try but didn’t push for or even suggest since I’ll eat just about anything. And with a large group ordering various things, I figured we’d  get a good sampling. If I like the restaurant, I’ll come back and order the things that caught my eye. So, it was a bit of a surprise to me when Jewelz ordered the brussels sprouts salad considering he doesn’t really eat veggies. Then again, maybe he did it for me since I’m the one who proclaims to eat 7-9 servings of vegetables and fruit a day (well, I try anyway).

To balance all that vegetable matter, we also had a cheese plate.

Octopus and squid are also some of the things I almost always order on a menu. I was very happy when Jewelz got this for us as well.

Carina ordered the gnocchi in a parm brodo with English peas. I liked this pasta dish over the maltagliati (flat sheets without the style of parpadelle) in the oxtail ragu sauce. While the gnocchi was obviously in a broth, I felt the ragu sauce was very watery and the flavor wasn’t balanced for me. I prefer more acidic tomato sauces as well.

The number one thing we knew we had to try was the maple-braised bacon which was meltingly tender. I loved it, of course. But there was not a hint of maple for me. Still, this is the dish I’d eat over and over again.

The Chinese eat anything. This sort of statement has been expressed to me by many people. I had no idea it’s now fashionable for others to follow suit. I’ve been eating dao mew (pea tendrils) since I was a kid. I like it with a lot of garlic. Cube served it up simply tossed with salt and with a squeeze of lemon, it was fine. Actually, not fine for those really sensitive to salt. 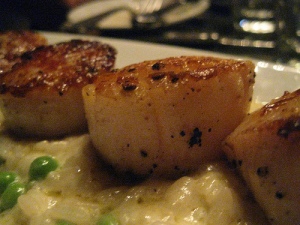 Besides my own venison meatloaf which I felt was the best dish of the night (fist pump!), I loved Carina’s scallops. 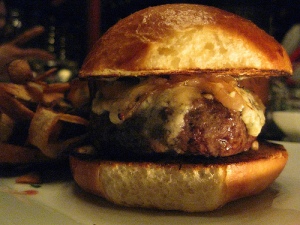 Sarah had the hanger steak, Andee had the branzino (very interesting how it was stuffed and served headless) and Julian had the truffle burger. This shot is taken by him on my camera. I thought the steak was a little tough. I am not fond of fish with bones and my one mouthful was full of tiny bones. The burger was described as one of the best in the city but I have fondness for other less dry burgers. Still, everything was really perfect. [insert a lot of lovey dovey noises of writers-who-like-to-eat grubbing] 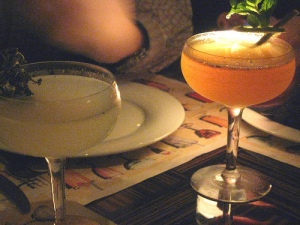 Ah! We stumbled a few feet over to Tar Pit to try these neo-retro cocktails set inside of what looked like an old Havana club (Buena Vista Social Club, anyone?). 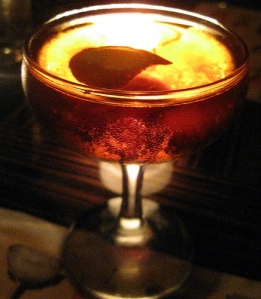 I had heard how dark it was and how people were having trouble taking pictures. But while I was there, I mentioned it wasn’t as dark as I thought it’d be. About 3 minutes later, the lights grew dimmer. Someone heard me!

I enjoyed everyone’s cocktails but really loved my own Little Italy and Trident drinks which were made with whiskey. The daiquiri was light and refreshing. The Old Cuban and Jamican Firefly spread warmth with the rum and gin drink, the Juniperitivo, definitely can pack a punch.

Most of the girls demurely passed on the fried oysters or ate half a bite. Me? Of course I ate one. It was great! 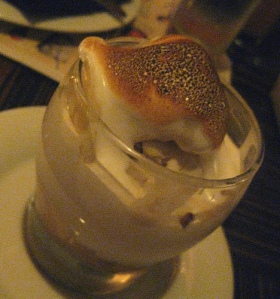 Besides the cocktails, there’s no better way to end an evening of friendship than with dessert. I was gunning for the banana fosters as soon as I saw it. Carina ordered the apple tart. I liked the bananas more. It was…bananas with marshmallow fluff. Yes.

I can’t wait to do it again. I hope we get the Mafioso room the next time.

*** Special thanks to Sarah, the Delicious Life for the cocktails.

← Wurstkuche VS Slaw Dogs
Beacon: Or Kimchi Goes on Everything →