Last week was a bit of a mish mash of activities. After ramen on Monday, we checked out Aux Delicies for dessert. I’ve seen this shop on Colorado in Old Town for years but I’ve never managed to catch it when it’s open. Walking in, it reminded me of Perfectly Sweet in Alhambra.

I had the white chocolate mocha and brownie. Both were too sweet for me. My sweet tooth has become a savory tooth and after a few sips and a couple of bites, I walked away. I could have probably saved the brownie but it was so soft and fudge-like that I knew I wouldn’t really eat it.

Then on Wednesday, I met up with a friend for an impromptu happy hour at Chan Dara. I’ve gone to the Hollywood location before and wasn’t overly impressed with the food. But sometimes those sort of neighborhood spots are great for happy hour as this was the case.

The bar was hoppin’ with activity. They had the Lakers game on but the restaurant was empty. Happy Hour is 4-7 daily and they have half off cocktails and well drinks as well as half off appetizers. Their 3-item cocktail list didn’t immediately catch my eye so I had a Cape Cod.

I ordered the Thai Toast which came 6 to an order. I seem to recall them being four big heart-shaped pieces at the Hollywood location but I like the 6 small hearts here.

The bartender felt like celebrating. Next thing I knew, I had a tequila shot in front of me and everyone at the bar downed them. Quite festive! 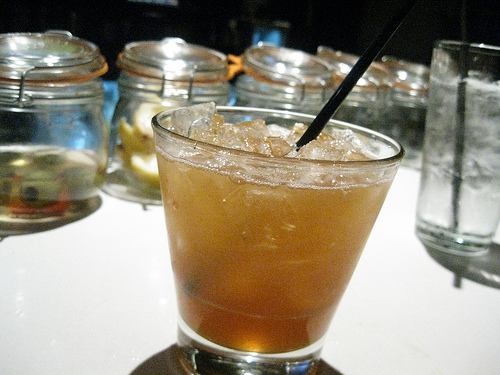 
Thursday ended up being quite the party night. I’ve always maintained it’s my favorite day of the week. I must still be a bit of a college girl at heart.

I started with happy hour at Ciudad, hopped over to Checkers, went to Starry Kitchen‘s party and ended up at CASA to eyeball the bartenders (always hunting for hot bartenders!). They were wrapping up a charity event. My friend has guest-bartended there before. They donate all the tips you make for your favorite charity. I caught the an amature doing his best Tom Cruise impression.

By this point, I’ve had a number of cocktails through the night but fave was the Whiskey Agave (whiskey, agave, bitters) at CASA.

And yes, it’s possible I might be doing another Hot Bartenders Crawl back in DTLA the next round!