For a belated birthday dinner last week, I went to Rivera. Besides the occasional late-night drinks and nosh, I usually go for lunch and have formed some bonds with the daytime staff. Last week was my first time dining for dinner.

Rivera has recently changed over their menus and now there is a menu for all three rooms. I usually sit in the Samba room but we also had access to the bar menu. Perhaps one day I’ll do the tasting menu.  For this entry, I’m mixing up lunch and dinner.

If you follow this blog regularly, you’ll know I adore mushrooms and was very much into this dish. It came with King oyster, bluefoot, chanterelle mushrooms. Since it’s carpaccio, they were raw and served with a bit of chimichurri and lime along with some spices.

I also love seafood. This appetizer is offered during lunch. The three large shrimp are served with a wonderful watermelon salad.

I have also enjoyed this red cabbage salad from lunch. It is served with cabrales bleu cheese and lardons. If you love crunchy things, this is the salad for you.

Soft shell crab! Arepas! I must have it. I thought it was quite fun they wrote “Bravo Gustavo” in honor of Dudamel, the conductor of the LA Phil. He is from Venezuela. I have sent this picture over to the Phil and maybe the Dude now knows there is a dish out there in his honor.

The soft shell crab was quite good and these were the best arepas I’ve had. Then again, I’ve only had Colombian arepas and haven’t been fond of them.

I have never had the duck enfrijolada myself but quite a few of my friends have (this picture was taken during one of these lunches and not during dinner last week). I know everyone enjoys the duck confit and the mole.

My favorite cut of steak is the ribeye. Rivera’s version came gaily dressed and accompanied with some veggies. Unfortunately, it was cooked beyond the requested medium rare but it was moist because of the sauce. I did enjoy the idea of it though.

Once for lunch, I tried the pork ribs. I have fixations on pork, seafood and any number of veggies (and mushrooms). These were good and I think I prefer these just over the steak. 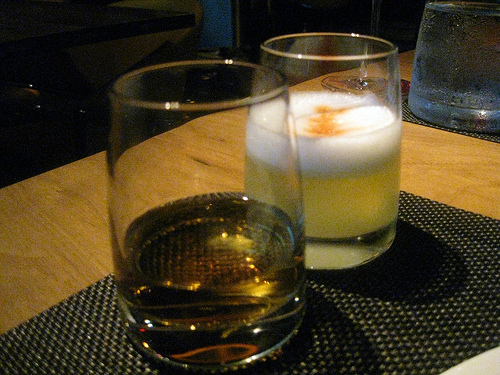 I was looking for something different to drink at this point and was given the deconstructed pisco sour. It was basically like a shot with a chaser. If you were sipping through dinner like I was, this was great but may prove to be unwieldly at the bar.

A simple dessert to get is the Mexico City sundae. It’s rich and satisfying. I’ve had their olive oil cake and chocolate cakes as well as the crema Catalan which is like a creme brulee.

So I was very surprised when I ordered dessert last week and the elegant simple desserts I’ve tried at lunch were immediately outshone by these numbers. I can’t decide what was more intriguing- the spun sugar or the giant nut candy piece on top of the cake? The avocado puree was amazing too.

What a lucky birthday girl I am!

← Soul in the Bowl, Part I
Pasadena Intelligentsia: Love a Latte →

4 thoughts on “Return to Rivera”