Chef Megan Logan recently became Nick & Stef’s new executive chef. While attending the Cordon Bleu College of Culinary Arts in Pasadena, she completed an externship with Nick & Stef’s and worked her way through the ranks of the Patina Restaurant Group. She worked at the Hollywood Bowl and most recently, she was the sous chef at Patina for the last four and half years.

I was invited to sample Chef Megan’s take on the Classic American steakhouse. She served us the wonderful steaks Nick & Stef is known for but it were the sides and desserts that captured our attention. The large spread included five different sides; squash, cabbage and kale fricassee, creamed spinach, wild mushroom ragout and mac and cheese. 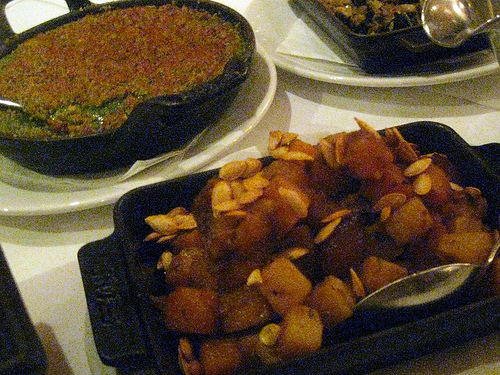 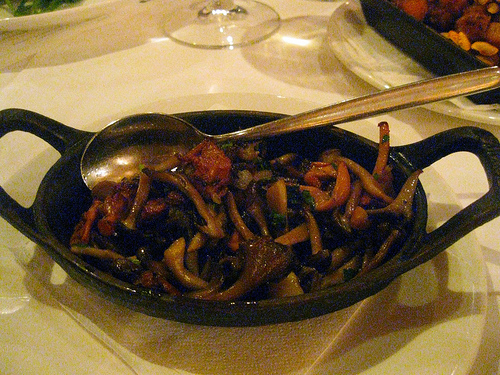 After I decided to try out the chimichurri and sauce au poivre vert with my steaks, I decided I really loved the NY Strip. Usually I’m much more into rib-eye but this particular night, the NY Strip was fantastic. One of our servers talked to us about the aging room. I remember the first time I encountered it years ago and to be honest, cannot recall very many restaurants having aging rooms. Nick & Stef’s ages their steaks for 28 days. 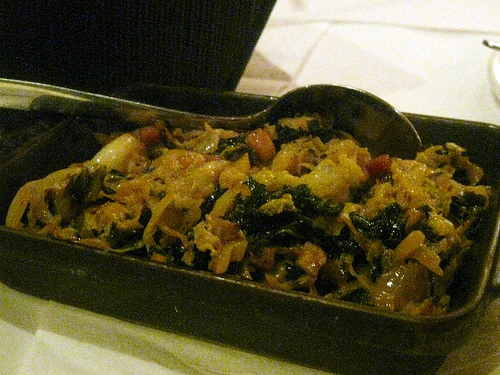 My favorite side had to be the roasted squash. No, wait, the cabbage and kale. No, I think it was the mac and cheese. 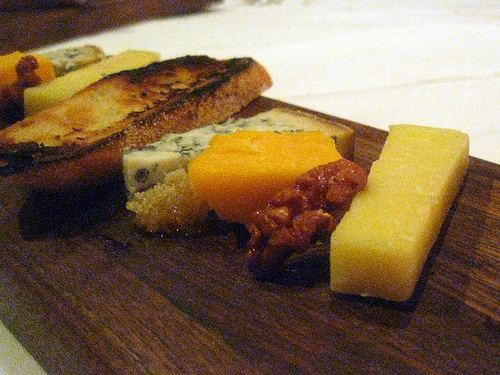 Even though I’m not a beer person (although lately, I’ve become a bit of a craft beer snob), I really enjoyed this beer and cheese tasting. My favorite was the Hook’s 10 year cheddar with the Deschutes pale ale. You can see some of the cheeses in the aging room (safely in their own compartment). 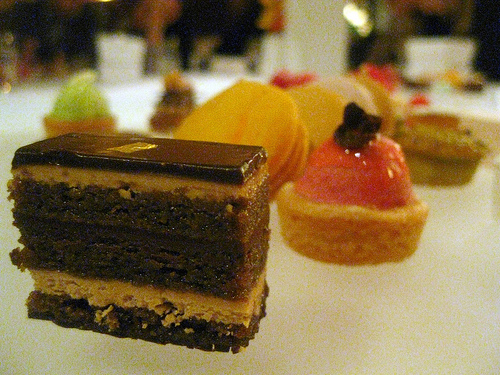 We were presented a dessert sampler that included over a dozen or so mini-desserts. It was like a chess board. What was my next move? Well, I had to try the mint marshmallow, the salt water toffee macaron (of the 6!), pistachio almond cake (there were also pineapple and chocolate), opera layer cake (shown above) and hazelnut praline napoleon. I’ll have to visit with the raspberry tartlet, chocolate ganache tart, crumble cakes (caramel cream, raspberry cream or pistachio cream) at some later date.

Nick & Stef’s has been getting serious about their cocktail program. I enjoyed the Sidecar (Courvoisier VSOP, Cointreau, fresh lemon) this evening and the lovely Hidden Agenda (Partida tequila, blackberries, egg white) along with some bar snacks.

In the land of expensive parking, Nick & Stef’s has three hours free parking after 4 p.m. and they offer a complimentary shuttle to Staples Center and theatres. I’m going to have to check this out the next time I’m out to a show.