I have been systematically eating at all the “fancy” non-cart dim sum houses in the SGV. My favorites are Elite and Sea Harbour with a slight edge to Elite. I didn’t manage to catch Lunasia when it was still Triumphal so I was glad to have tried it recently.

We got there right around 11:30 a.m. and there was a slight wait. You were entertained by a giant iPod looking screen showing shots of budding Asian models, the weather and the time. There was an afternoon wedding banquet that day so we were crowded around a folding table with folding chairs. Wasn’t it nice they managed to squeeze us in?

I had checked out their website beforehand (they have a website!) and printed out their check-off list (which they encourage you to do) and marked off the things I wanted. Once I got to the restaurant, I conferred with my dim sum buddies and we carefully managed to not over-order. The problem with these check-off lists tend to lead to distended stomachs and bags of leftovers.

First up was the chicken feet. Over the years of eating dim sum twice a week with my parents to once every few months with friends, I’ve developed a taste for chicken feet. I still like duck feet more but done right, chicken feet can be just as good. The three of us ate these quickly. They were tender and I wish there were a few more feet less chickens running around.

I had heard from others that the siu mai and har gow at Lunasia were big. They’re big too at Elite and Sea Harbour. Oh wow, no, the dumplings at Lunasia are twice as big as those and those were already much more big than other dim sum houses. I would then say a typical siu mai here is 3X as big.

So you think this is a good thing? Well, yes and no. They’re gorgeous to look at but unwieldy and hard to manage. Dim sum should be the perfect bite. I found myself fighting with the dumplings. The other enormous dumpling was the chiu chow fun gor. I was disappointed it didn’t have as much flavor as ones I’ve had in the past.

At the same time, things that should have been generously bigger were not like the shrimp cheung fun. The four little bundles were piled in the corner of a dish that was oddly portioned out. Was that little dip supposed to be for the sweet soy sauce or not? 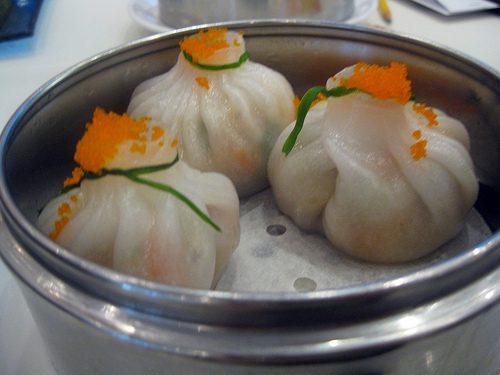 Oddly, Lunasia has a very Engrish spelling of foie gras. Named “fro gura,” these dumplings were a much better rendition of foie goie dumplings than when I had them at nearby King Hua.

Just so that we’re clear on this, I didn’t order these spicy chicken wings but a friend wanted them.  These were good, not oily but I wouldn’t say very spicy either. 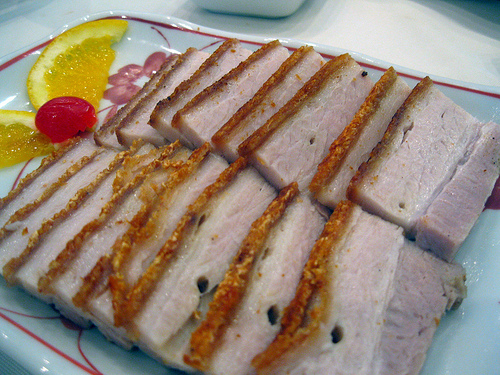 The Macau roasted pork belly was supposedly one of the best things at Lunasia. I stared with a bit of astonishment it came with a side of MSG (not pictured). Oh sure, it could just be “salt.” But we all know what dish was supposed to do. Perhaps that’s why some find this pork belly addicting. I rather thought it was sliced too thin.

After all those dumplings and meat, we needed some veggies. Instead of the more traditional Chinese broccoli, I wanted these green beans. I thought they were a bit too salty. After that pork and these beans, I almost wanted rice.

The bean curd wrapped veggies turned out to be a mini-soup with dried shredded scallops as a garnish. These were great and probably the most version of this dish I’ve had before.

I sure as heck didn’t know what wolfberry cake was but it seemed like the Macau roasted pork, this was the thing to get. They brought this out to us early on so it sat while we ate our dim sum. A friend thought it was dried out by the time we ate it but I thought it was fine. I tasted like chrysanthemum tea jello. And I meant that in a good way.

16 thoughts on “Dim Sum at Lunasia”