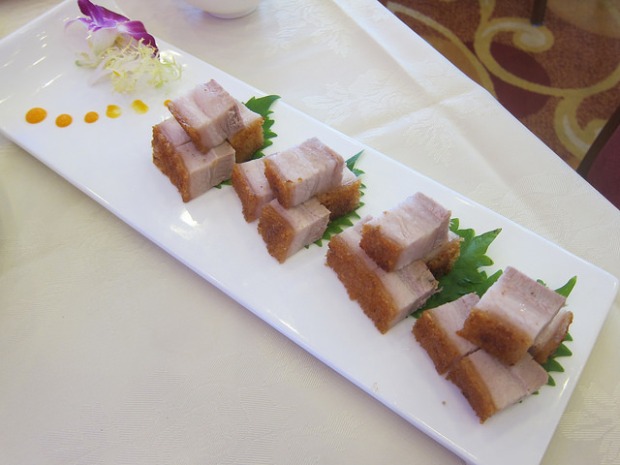 Anytime a new dim sum palace in the San Gabriel Valley, people flock to it in droves to check it out. It was then odd to find Shi Hai not very busy. We didn’t have to wait for a table during prime dim sum hours at noon on a Saturday. Recently the critic named it one of the best– but only on a good day which I find amusing. Would I go on a good day then? Apparently not. Here’s a rundown of the 12 dishes we ordered with an emphasis on the supposed favorites of the critic.

We ordered the roast pork belly which had one of the best platings I’ve seen in a Chinese dim sum house. Oddly this was served with mustard and mayo instead of the more traditional hoisin sauce. I also tried it with the decorative dots of orange sauce but there wasn’t much flavor. The pork was way too salty. 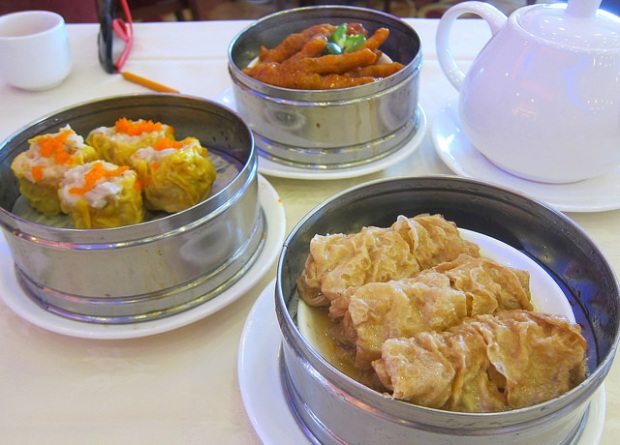 We wanted to get some traditional items. We had to get pork and shrimp dumplings (siu mai), chicken feet and the tofu wrapped veggies (shin jook guen). They were fine, nothing special. The chicken feet stood out as the best dish of this trio. But it’s certainly not the best compared to many other dim sum houses in the SGV. 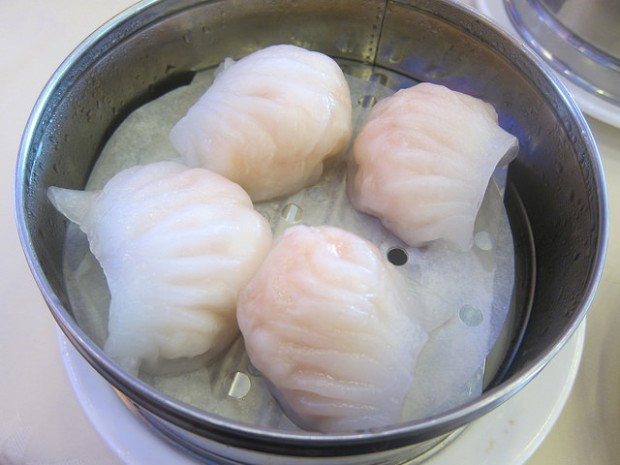 I found the wrappers for the har gow (crystal shrimp) just a tad oversteamed and therefore a bit flabby. It was still very much edible, however. 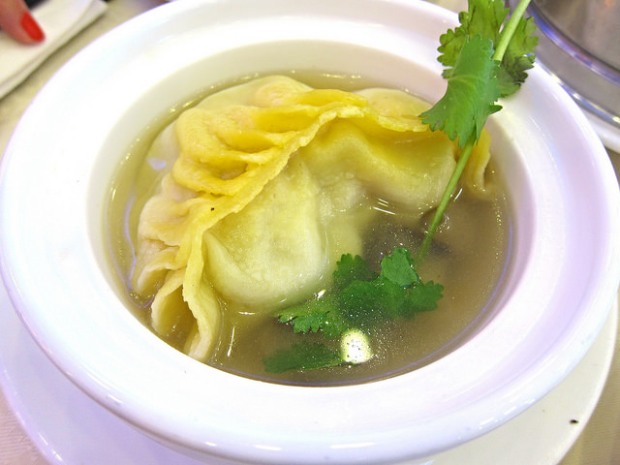 On the other hand, we loved the giant soup dumpling. The broth was very good and there was a ton of filling. It is one of the pricier items so it could get costly if you order more than one. 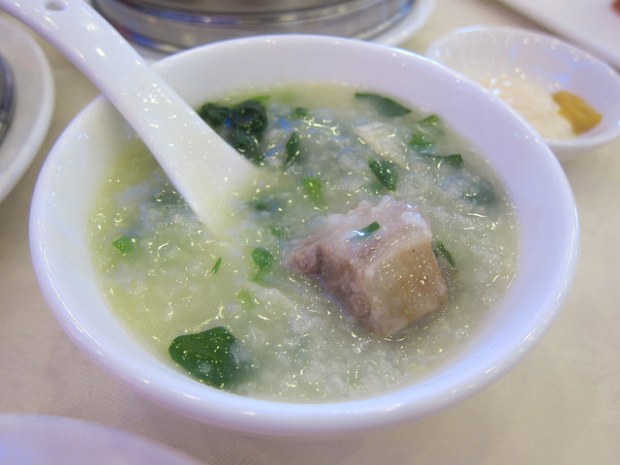 We found the porridge to be quite bland. My dim sum partner had to ask for white pepper and salt. I ended up eating this with bites of the too-salty roast pork belly to balance it out. 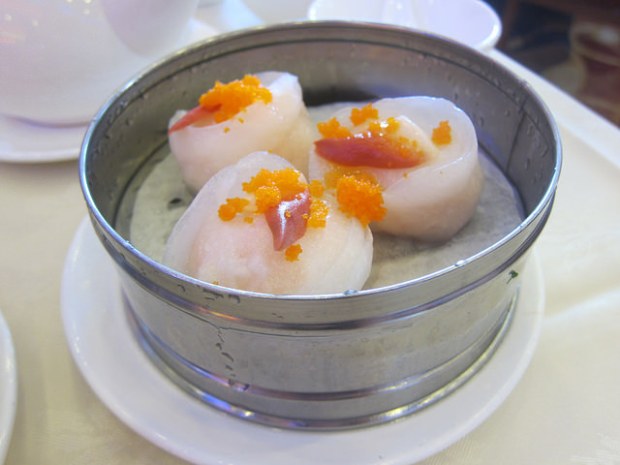 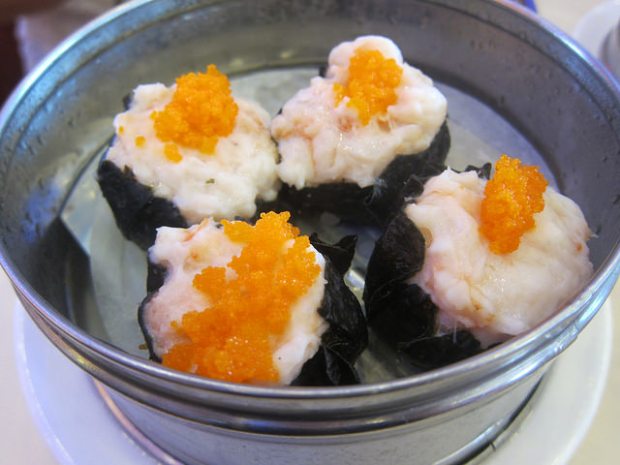 Sometimes a little garnish goes a long way. When there’s too much of it though, it influences the overall dish in not a great way. There were gobs of roe on top of the next set up dumplings. This was supposedly one of the favorite dishes but I found it became too fishy with all that roe. 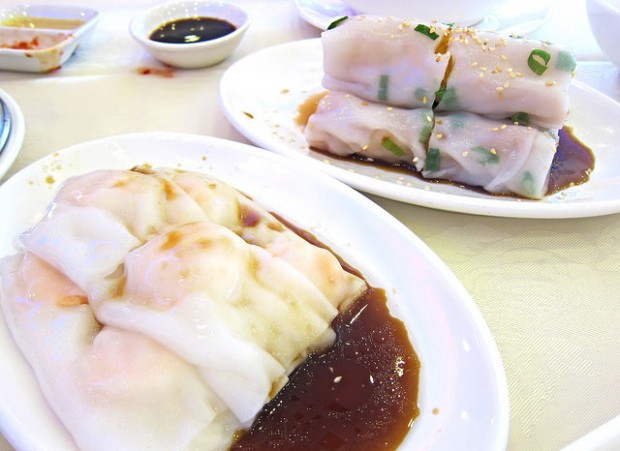 We also got the shrimp cheung fun and noodle wrapped crullers. I have always preferred regular cheung fun. These were fine. I thought it was a little bit odd there no greens (usually asparagus) as some of the fancy dim sum places like to stick in there. I didn’t mind them being more traditional though.

The crullers or Chinese donuts were stuffed with a minced shrimp paste. I would have preferred these plain but I’m generally not a fan of this cruller variation. I much prefer plain donuts to dunk in my porridge. 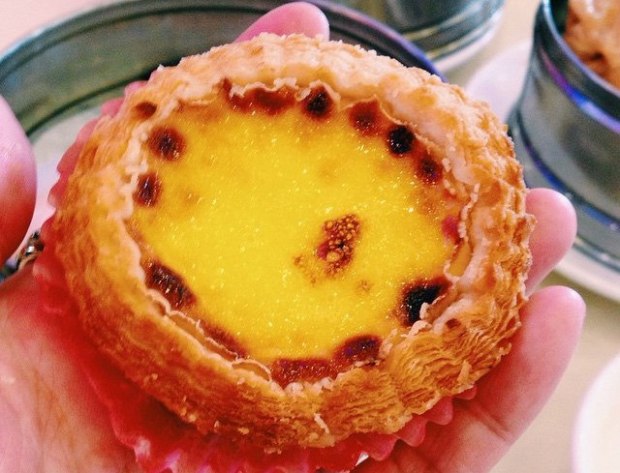 My favorite thing of this meal was the egg tart. Thick and creamy, the centers were almost solid compared to the more delicate egg tarts around town. This would be because this is the Macau version of the egg tart.

After spending $60+ (including tip) for two, we didn’t think this was worth returning to. It wasn’t horrible but it is an expensive price to pay for run of the mill dim sum. I much rather go to Shanghai Seafood No 1, Lunasia, Elite, Sea Harbour or if I want a quick and easy dim sum experience, I’d go to NBC Seafood, Monterey Palace,  888 or Atlantic Seafood. I will be revisiting King Hua soon so look for a full report soon.