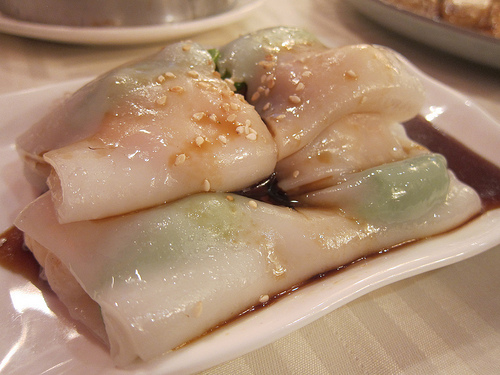 Before the holidays, I met up with a friend for dim sum. We used to dine at restaurant with cuisines from Communist countries. It was a funny theme and not something we actively pursued. It just happened to be the case. I said we should really do dim sum from the land of Mao.

I’ve heard so much about dim sum from Shanghai No. 1 Seafood that I wanted to check it out. Dim Sum is a Cantonese thing so how is this restaurant doing dim sum? Apparently the day time chefs are Cantonese are in charge of dim sum while the menu reverts to Shanghainese food at night. Reviews seem to indicate the dim sum is better but I would like to return to check out the Shanghainese specialties.

My habit at restaurants where you order from a sheet is to tick off as many dumplings as I can find; covering the basics and hoping for some new delicious treats. I also throw in some classics and then turn the list over to my dining partner(s). I don’t care for bao, the big fluffy buns because I find them too filling.

I was pleased with the shrimp cheung fun and surprised by the pea pods. The Chinese have been trying to make this dish healthier by adding such things as asparagus. This was the first time I’ve had it with peas. It was different but sometimes I would like just pure shrimp and the noodle wraper.

The giant seafood ball with whole shrimp tails sticking out them came towards the end when we were already quite stuffed but I had a small bite, savoring the bouncy mouth feel of the shrimp ball.

I liked the various dumplings but I have to say the ones filled with shrimp and leeks were the best.

I love chicken feet and Shanghai makes theirs rather saucy– what you want.  I feel other places give you more feet but Shanghai’s were plumper.

The black bean sauce for the spare ribs were good, light and not goopy like some places that thicken with too much corn starch.

When we saw “giant soup dumpling” or whatever its official name is, I went a bit crazy. I thought it’d be like the giant soup dumpling at nearby Wang Jing Xi but alas it was just a regular looking dumpling but about 5X the size. I found this awkward to share. We left a lot of the broth behind. Make sure you get two if you aren’t into sharing.

The classic staples of dim sum are the har gow and siu mai.

At Shanghai, these were smaller than the enormous ones that emerged sometime in the 90s. I liked neither enough to have favorites but I didn’t dislike them either. I was just more distracted by the other offerings. Still, I’d probably order them again– they are the hallmarks of dim sum for me.

I absolutely adored the freshly fried shrimp rolls. I found them slightly unusual and I could have gone for another order of these.

We weren’t into the Shanghainese rice cakes with pork. For one there, there wasn’t much pork and really, the dish wasn’t tasty. I doused my portion with hot sauce. I suppose the Shanghainese chefs really are out of the kitchen during the daytime dim sum brunch hours. 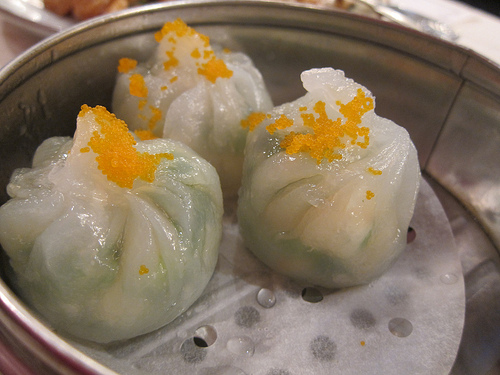 These Chiu Chow fun gor were a bit different. Instead of the traditional peanuts, Shanghai used pine nuts instead. I also missed the celery.

On the other hand, the daikon cakes were awesome. Served warm with just the right amount of crust, I considered what I could stop eating so I could make more room. Oh why did I order all those dumplings? 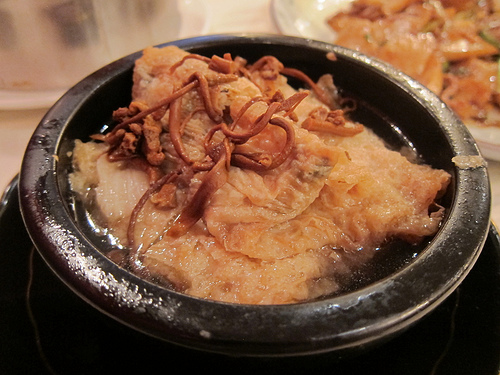 One of my favorite things is tofu. I like it all forms but especially as bean curds. Used as a wrapper for some veggies, this is very savory and we definitely didn’t have leftovers of this. 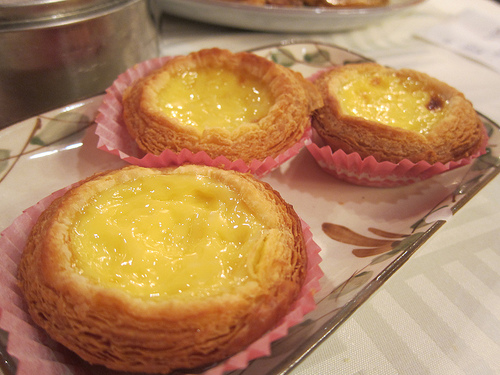 I don’t always eat dessert but I can always go for an egg tart. We actually didn’t order these at first but Shanghai does come around with various dishes to tempt you. And these egg tarts did just that– temp with their lovely yellow centers and buttery crusts.

Shanghai turned out to be a great place for dim sum but a few notes- it does look like some sort of Chinese bordello with the red, black and silver decor. And the line to get in and out of the parking lot and underground parking can be a big pain. But for cheap and cheerful dim sum? It’s worth a trip.