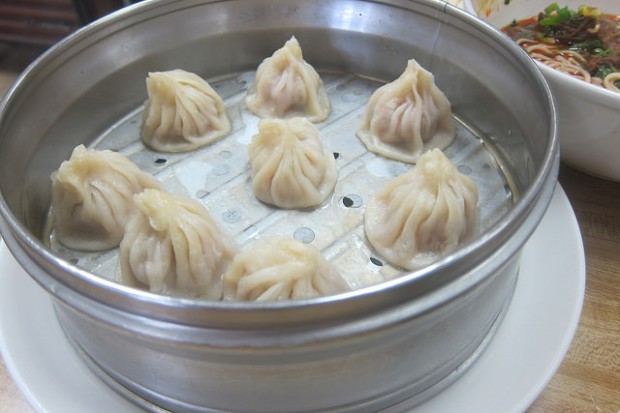 My noodles and year of omakase partner laughed at me last weekend when I opened the menu at Flavor Garden in the San Gabriel Valley. I wanted everything. However our two-top was rather small and we decided to just order a few things and get more later. Of course I was already thinking of a noodles crawl with at least 6 other spots in this San Gabriel Valley strip mall. Having already gone to Kim Kee (which I realize now I never wrote about, confusing it with similarly named Kim Ky), I was eyeballing the ramen shop, pho joint, another Northern Chinese restaurant and both Noodle Guy and Noodle King.

We came to Flavor Garden with the intention of getting dumplings and noodles and so we did– first ordering pork and crab xiao long bao aka soup dumplings. Although the filling was fine, it was really the wrapper that enchanted me. They had a nice bouncy feel and chew. I could have another round just for the wrappers.

We did get a bunch of appetizers. Recently both the noodles partner and I have really gone for mung bean jelly at both Szechuan Impression and Chengdu Taste. We both prefer the ones at Szechuan Impression. The ones at Flavor Garden were a bit flabby and the sauce could be a tiny bit spicier.

I’m in love with seaweed and I pretty much ate this entire plate by myself almost immediately. Okay, I lie. I did take some home. But I still ate all of it by myself.

On the other hand, both the noodles partner and I enjoyed the pig ear. It wasn’t terribly spicy but had a nice flavor. The ears were crunchy and made a nice change in pace while delving into our noodles. 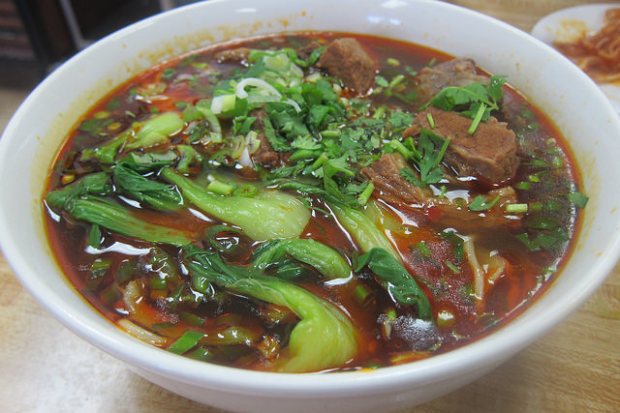 I was shocked how tender the beef was in the spicy beef noodle soup. The soup itself was relatively mild but we did ask for medium spice. I loved all the veggies in it as well.

I would come back to Flavor Garden because as my friend says, I have hungry eyes and I kept looking at the sheng jian bao that everyone seemed to have on their tables. I want to compare them to those marvelously crispy bottom dumplings I adore at Shanghai Seafood No. 1.

But perhaps after I have eaten at all the noodle shops in this strip.

← Eagle Rock: Getting Down at Taco Spot
Venice: Jumping on the Poke Craze at Poke-Poke →

One thought on “SGV: Dumplings and Noodles at Flavor Garden”