I seem to be eating a lot of dim sum lately having recently gone to Elite and NBC Seafood. Yet, for someone who ate it twice a week, every week growing up, I really only go a handful of times a year now. Generally speaking, most people go to the San Gabriel Valley for dim sum but there are still some viable spots in Chinatown. My grandmother worked at what is now Ocean Seafood back in the 70s and 80s. Her sesame balls were my favorite. They’re like a thinner-shelled mochi stuffed with red bean paste, deep-fried and then dusted with sesame seeds.

When a friend asked me to Ocean Seafood, I realized I hadn’t been to this restaurant probably since my grandmother retired. Most likely it has new owners and they have some of the more aggressive dim sum cart ladies in town (gotta love that attitude). When I do dim sum in Chinatown, I usually go to Golden Dragon or CBS Seafood. After thinking about my meal at Ocean, I am surprised to say I liked it better than the other two spots. Ocean seemed less like a greasy spoon. Perhaps partially aided by the fact they’re on the second level. You have views of Old Chinatown.

While I liked the chicken feet in black bean sauce more at NBC, I generally thought the food was better at Ocean. However, we didn’t pick out very much so a return trip may be in order soon. I also didn’t get any har gow (crystal shrimp dumplings) and that is one of my measures of dim sum. I did try the scallops dumplings and shrimp cheung fun which were delightful.

My friend remarked she was glad we had similar taste when it came to dim sum. We both enjoyed the tofu skin wrapped veggies. Not quite the best I’ve had but not bad.

One of these days I’m going to have to photograph how to unwrap these sticky rice lotus-leaf wrapped “Chinese tamales.” You flip it over and just undo the leaf. Ocean is old school by just using the leaf and none of that modern parchment paper stuff. These loh mi gai were good. Probably could use a bit more bits and bobs of meat but you definitely get full from the rice. 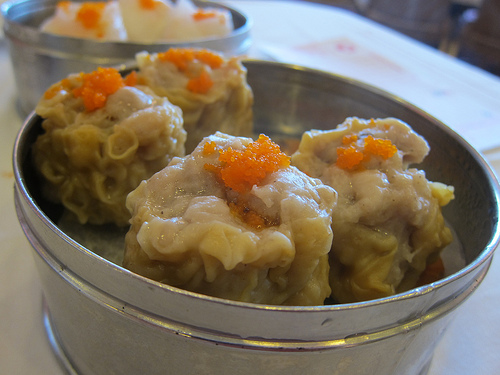 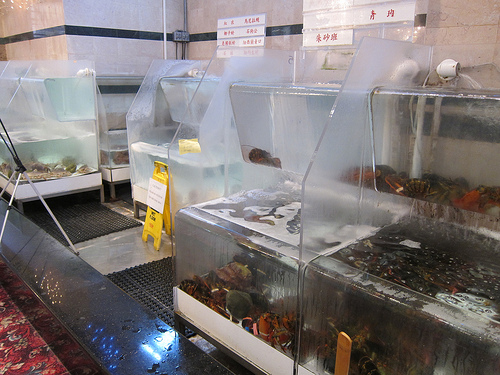 I have to say after going to plenty of Chinese restaurants through the years, this was one of the first to feature a veritable store by the hostess stand. The tanks seemed more like the sort you’d seen at a grocery than a restaurant. Still, the crab and shrimp looked good. Time to return for dinner?

Other dim spots around town: