I was invited last week to check out the new Winter menu at Michael’s in Santa Monica. Michael’s has been in Santa Monica for over 30 years and owner Michael McCarty opened Michael’s New York in 1989. Michael also owns the Malibu Vineyard. We enjoyed the pinot noir that evening. I love that Michael’s wife, Kim McCarty, painted the watercolor on the label.

For the amuse bouche, we were given beet-cured hamachi. 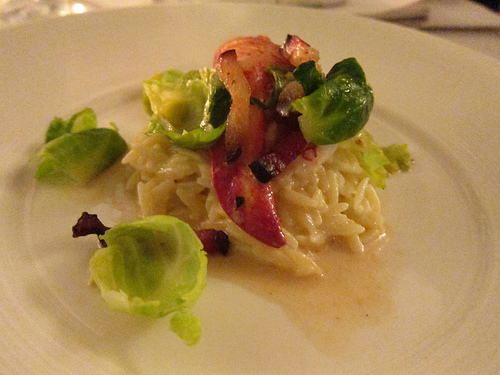 I really wanted to try either the Maine lobster or the Dungeness crab salad as my starter but it seems everyone around me was getting it. I did have a bite of the lobster and it was fantastic.

I decided to get the crispy sweetbreads. I’ve been getting into sweetbreads lately and I love whole-grain mustard. I was surprised what a big portion this was for a starter. The chanterelles in the dish were great.

The Maine diver scallops actually come with salmon roe but this dish was requested without it. I had a little bite of my neighbor’s scallops and they were perfectly cooked. 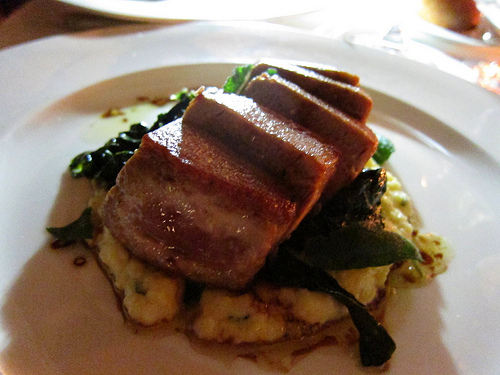 My other table-mate had the big-eyed tuna which I didn’t realize at first as the fish was so meaty. It almost also looks like pork at first glance. 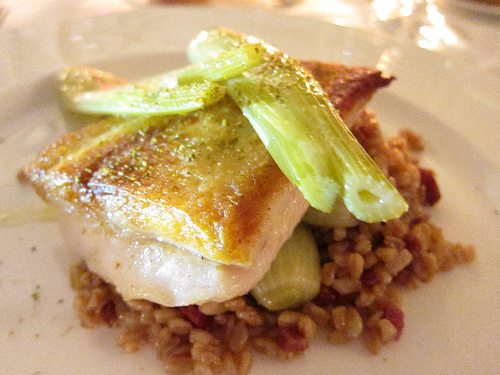 Since I got something meaty to start with, I opted for the Eastern halibut as my entree. It came with baby fennel which I remarked was quite different as it was tubular. A friend said they are the fennel bulb stalks but since they were bound at the bottom, I’m not quite so sure. In any case, I liked the lightness of the vegetable to accompany the fresh fish.

Executive Chef Michael Stern has been with Michael’s since 2002, working his way up through the kitchen before accepting the position of Executive Chef in 2007.

Once a month, Michael’s features farmers’ market demonstrations and tastings called Michael’s Meet-Ups. It sounds really fun. You meet at the restaurant for coffee and buns then head over to the market to talk to farmers. You’ll learn how to pick the best produce and then enjoy the bounty back at the restaurant.

Michael is planning more fun things for the restaurant. Cocktail enthusiasts, stay tuned for my next post about their new mixology and guest bartenders program.