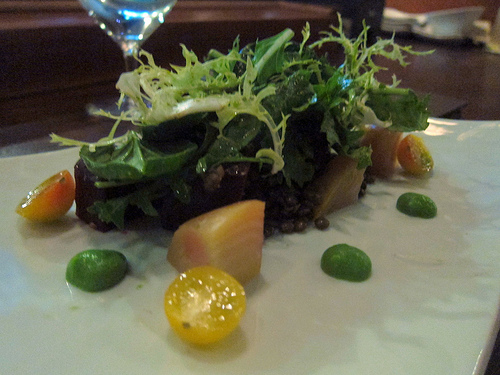 Back in the 80s and 90s, La Cienega from San Vicente to Wilshire was known as Restaurant Row. It still has many restaurants but other than Bazaar at the SLS, I can’t recall any hot restaurants opening until La Seine. Controversial Top Chef contestant Alex Reznik heads up the kitchen.

La Seine keeps kosher so there’s no pork or shellfish. A rabbi in the kitchen keeps a careful watch. And they’re closed on Fridays and Jewish holidays. How’s this restaurant going to survive in LA? Well, the menu isn’t lacking at all. We were sitting at the sushi bar where you could also order from the regular menu. We picked out the shishito peppers, beet salad and Jerusalem artichoke soup to start.

I found it oddly fascinating our server described everything delicious and as Chef Alex started to explain the soup to me, the server cut in and said, “it’s delicious!” Certainly it was but I would have liked to hear the chef talk about his creation directly since he was already doing so.

We started with a couple of rolls. La Seine roll sounded appealing with the seared albacore, shishito peppers, jalepenos and chimichurri. Surprisingly it wasn’t very spicy. The tartness of the chimichurri played up the fish very well. 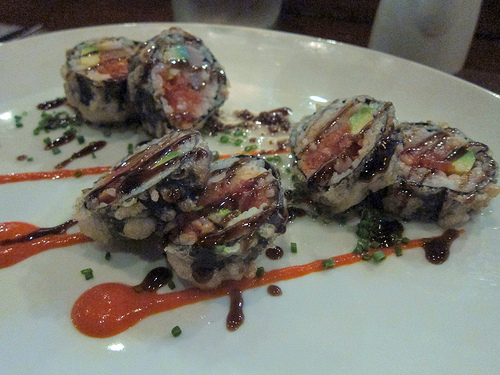 The Godwin roll sounded spectacular with yellow tail, spicy big eye tuna and avocado. It was also lightly fried, tempura style. I’m still not a huge saucy roll fan so I preferred the freshness of the La Seine roll more.

I was eating with a friend who may be leaving the restrictions of vegetarianism and becoming full-blown opportunarian. Take the opportunity to try anything! I ordered us salmon, yellow tail, kanpachi (amberjack) and Spanish mackerel. The amberjack was my favorite then the Spanish mackerel. I really liked that these weren’t traditional nigiri. The various sauces meant I didn’t have to add soy sauce if I didn’t want to.

I would love to come back to try more of the cooked menu. I wouldn’t really call this a French restaurant despite its French name. In fact, if there’s one thing I learned during my Kosher crawl, keeping kosher doesn’t mean you have to just eat “traditional” Jewish deli food. You could have things like veal belly or fettucinie bottarga. A five-course or eight-course tasting menus are available. That may be the best way to try everything.