Last Friday, the Opportunarian presented me an interesting culinary challenge. She’s doing the 4-Hour Body Diet and asked me to find something that fit her dietary restrictions. I picked a vegan restaurant and sushi. I secretly hoped she’d go with sushi and luckily for my seafood-loving soul, she did.

all the fixings that come with the combo

I had been to Sushi Go 55 a couple of years ago for lunch. It was one of those long lunches- the type where you sit at the bar and just order whatever caught your eye and fancy. It wasn’t omakase but pretty darn close when you spend well beyond your weekly budget on just sushi and lunch at that. 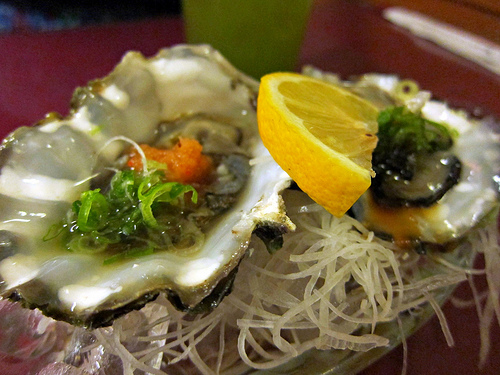 However, I’ve always know Sushi Go 55 could be more than affordable. There are a set of sushi combos that could please anyone as well as plenty of cooked dishes. I decided  to go with the first sushi combo. The Opportunarian ordered a la carte including grilled eggplant (not shown), albacore sashimi, oysters and shared some additional items with me.

My 12 pieces of sushi and one tuna cut roll was more than enough but I’m sushi-greedy. I wanted more. Scallops, “giant clam” (geoduck) and spicy tuna hand roll rounded out our meal.

I was particularly impressed with the tuna in my combo. Normally I’m not a fan. The only other time I really enjoyed tuna was when my friend’s father caught it and we had an impromptu sashimi fest. I actually really wanted more tuna and was glad to have this tuna roll.

I love me some roe nigiri, especially salmon roe. 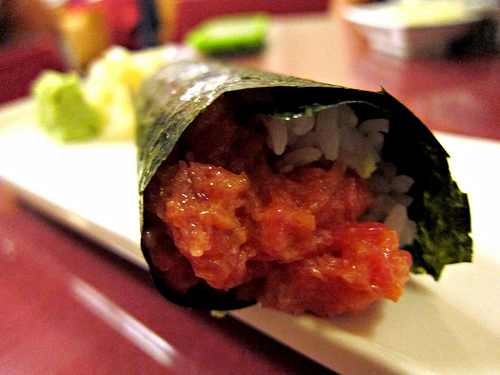 I usually love spicy tuna but I preferred it whole at Sushi Go 55. Next time I’m trying a blue crab hand roll.

I was rather surprised how big these scallops were. They were so fresh too.

The only thing I probably wouldn’t order again was the geoduck (giant clam). Instead of the sweetness I was expecting, these were slightly fishy. But I did appreciate the texture.

I also enjoyed the seared albacore sashimi. Some who are anti-sauce may find it a bit overwhelming at first though.

I’ll stick to the combos next time– probably the only place I would ever recommend going that route. You get a lot of bang for your buck.