On the heels of Wraps & Rolls opening around the corner, Dos Chinos opened last week. Dos Chinos is a Latin-Asian fusion food truck mostly seen in Orange County. It’s good LA now has the opportunity to try their fare at the corner of 11th and Hill at the Belasco.

Being unfamiliar with the food truck, I didn’t know what to order and wanted to get a few tacos. However, the counter woman talked me into a burrito because it’s a better deal. A little birdy told me this week they started offering combos.

On this day, Dos Chinos was offering 6 choices for protein- Bolsa Roast Pork (pork belly), Hollywood Chicken (Thai coconut), Wilshire BBQ Beef, Dos Chinos Asada, Oahu Shrimp and San Gabriel Breakfast (eggs & chorizo). There did not seem to be a veggie option other than getting a 3-cheese quesadilla. Then you get to pick how you want it- taco, burrito, torta, quesadilla or papas (potatoes). The fries are cooked in clarified butter and topped with cotija cheese.

While in general I was pretty excited to try the Oahu shrimp burrito, I felt it could have been better if it was actually hot. I understand working in a food truck and a restaurant may be fairly different but the burrito was lukewarm at best. 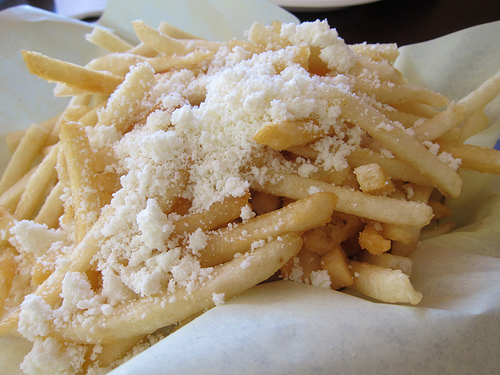 My friend got the pork belly torta. We realized later the thinly sliced pork belly would work better in a quesadilla or on top of papas.

Overall, I have high hopes for this place. The owner said he’s hoping to get booze in soon (using the Belasco’s license) and once they work out the kinks, there’ll be another contender for tacos in the neighborhood. My beloved rainbow shack (El Comedor) may have to watch out!

Hot tip- also heard Vintage 10-Fifty is switching over to a burgers and salad menu. No more overpriced sushi.