After Speed Rack, we headed over to Public Kitchen and Bar for a bite. Of course we had to get the oysters. I wish the December Oysters & Champagne event was going on then! I could have easily slurped up a half dozen by myself.

For the month of December, Public is offering specially priced oysters and champagne (both glasses and bottles) during dinner service. Oyster varieties rotate daily but look out for both East Coast and West Coast oysters like Belon, Coromandel, Fanny Bay, Hood Canal, Kumamoto, Malpeque, Phantom Creek, Raspberry Point, Well Fleet, Salt Pond, and Kusshi. Public is offering them at $14 for a half dozen, $20 for nine oysters or $28 for a dozen. Glasses of champagne range from $10 to $29 and bottles go for $35 to $140.

And another natural was the shishito peppers. Like the oysters, these peppers disappeared quickly. I noticed I had a habit of ordering a bunch of appetizers and maybe one entree to share and no desserts when I go out. I crave trying many small plates so a menu like Public’s is perfect for trying out interesting sounding dishes.

It’s interesting to me I also tend to gravitate towards “offal” or “weird” or lately “extreme” foods. Lamb’s neck shepard’s pie fit the bill easily as the “weird” thing that most people would probably avoid. As I suspected, I loved this with the thin crispy potato chips and creamy, de-constructed pie. 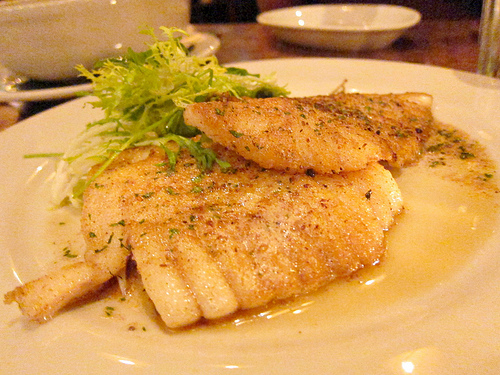 Okay, I love skate but apparently I’m a bad person because according to Monterey Bay Aquarium’s Seafood Watch, they are to be avoided. All right, all right, we will get the farm-raised scallops next time.

Or maybe I’ll just have more oysters which are recommended by Seafood Watch.

One thought on “Hollywood: Return to Public Kitchen & Bar”