Culver City: Another Spin Through Lukshon

I recently took a friend to Lukshon who’s never been. There were some items that were new including a couple of cocktails and savory dishes that I wanted to check out. Usually I like to sit at the bar but this night, we opted for the chef’s table which is the counter in front of the open kitchen.

The cocktail list grew from five cocktails to seven. I tried the Formosa (Ethereal gin, Lillet blanc, atomized mizhiu tou (rice wine), ginger pearl onions) and my friend had the Camellia (silver needle white tea vodka, bergamot, Seville and Valencia oranges, bitters). She declared hers delicious. For previous thoughts on the other cocktails, check out my other Lukshon posts here and here.

Lukshon now has a matzoh ball soup on the menu. When I asked our server how was it, he blinked and mumbled something in a brusque tone. Well, all right then. I didn’t have the greatest of feelings ordering it after the explanation it’s essentially Lukshon’s version of matzoh ball soup (well, duh). However, my guest seemed to enjoy it and after a while, I conceded it was good. Those who enjoy traditional matzoh ball soup may be put off by the somewhat lighter broth but I have always wondered about putting matzoh balls in other soup bases. For instance, I think they’d make a fantastic addition in Baco’s bacozole. 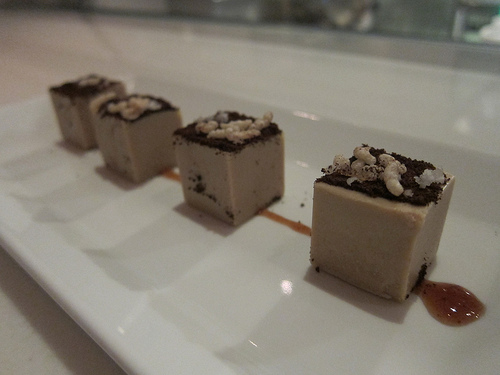 In my previous visits to Lukshon, I didn’t get a chance to order the foie gras ganache so I was determined to check this off the list. The four cubes arrived and I was a bit turned off by the too-cold texture. My guest likened it to ice-cold butter not being able to spread. It was really not a comfortable texture. However, I decided to leave it alone for a while and after it got to room temperature, it became amazing as foie gras should be. 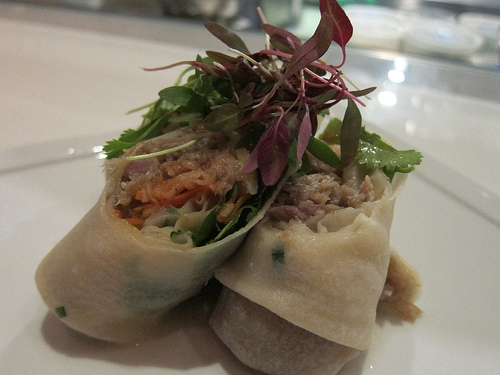 I love it when friends allow me free rein over ordering so after I picked out my favorite baby Monterey squid stuffed with sausage, I also chose the sweetbreads “orange chicken style” and duck popiah having never tried those. We particularly loved the duck popiah. Full of meaty, silky duck, my friend remarked this would be good on its own for lunch. Although I am not a fan of orange chicken, I wanted to try the sweetbreads done that style. I thought the orange chicken sweetbreads were interesting. Very light and crispy.

Of course we had to order the garlic pork belly. It came with nicely chewy Korean rice cakes (dduk). I loved watching  my friend discover them. Now I’m determined to drag her to Ktown so she can have some proper dduk. This version was a bit sauce heavy for me. I would have liked some plain rice but we ordered another saucy dish, the Bhutanese red rice.

The Bhutanese red rice with lamb bacon was excellent. I did wish for a tiny bit Chinese celery in it but that’s only because we didn’t order any veggies with our meal. Otherwise, I would have liked to try the eggplant “fries.”

Lukshon is one of my favorite restaurants and I don’t know why I don’t go more often. Plus, I love how they’re still doing complimentary dessert.

5 thoughts on “Culver City: Another Spin Through Lukshon”