Chef Ben Bailly has taken over the kitchen at Cliff’s Edge. Ben was most recently private cheffing and previously at Fraiche and Petrossian. I was invited to dinner a couple of weeks ago to check out his menu. I previously only had snacks at the bar and tried their drinks so I was looking forward to dinner. 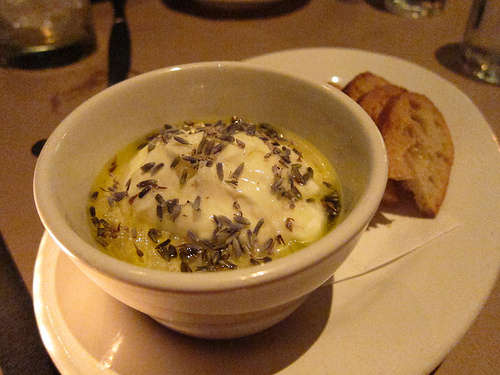 The first time I ever had chickpea fritters was at Frances in San Francisco. I loved them so much and no other restaurant has come close to capturing the joy of my first bite there. Until I had Ben’s version.They were fluffy on the inside with a nice crispy coating. I hardly needed the lemon aioli but found myself compulsively dipping all the same.

We also had whipped ricotta with lavender, honey and olive oil. Seemingly rich and light at the same time, the spread quickly disappeared. 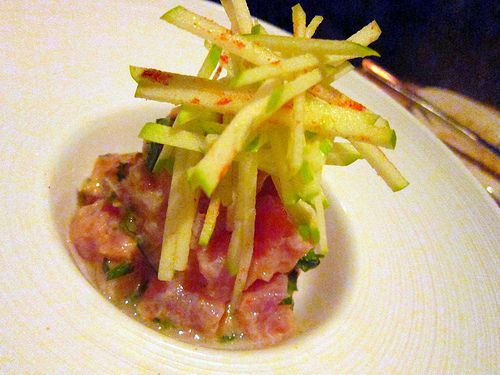 The albacore ceviche was immediately familiar with the julienned matchstick  pieces of green apple. I’ve had something similar before at Fraiche. However, the sauce is a bit different, more creamy. I enjoyed the dish but perhaps a bit more cilantro and lemon (or lime) would be needed to make it more of a ceviche. 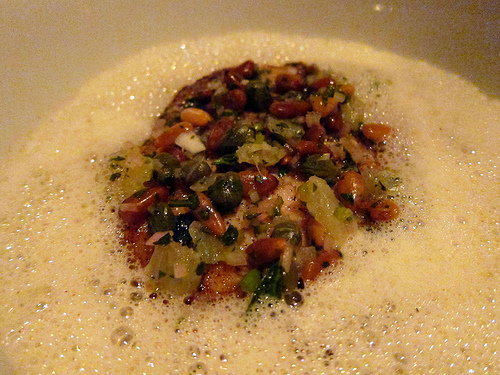 Next our seafood courses arrived. The seared scallops arrived on a bed of cauliflower and salsa verde. Scallops are always a favorite of mine. There were three of us and we politely did not fight over them. Let’s just say I did end up with nearly a whole one for myself though.

I had told Ben I love skate so I was delighted when the dish came out with a brown butter foam, sunchokes, pine nuts and capers. It had excellent acid and was very well balanced. I am embarrassed to say the server caught me searching the bowl for more skate tidbits.

The Brussels sprouts arrived under a blanket of Parmesan cheese and flavored with anchovies and capers. I dug a few out for photo purposes. These were a great side dish for our mains.

For a meat dish, we had the tender lamb cheeks. With a celery root puree, rapini and hazelnut gremolata, the dish was very rich. It was balanced out by the rapini. The slight bitterness helped cut the richness of the meat and the celery root puree. 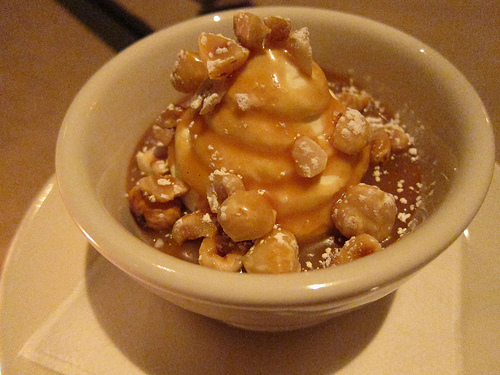 We were so full but no good chef lets you leave without dessert. Chef Ben sent out a hazelnut budino with homemade nutella and whole chopped hazelnuts. I had a couple of bites, keeping to my 2-3 bites rule and wished I didn’t have such a rule for myself.

Ben’s been working the bar and brunch menus (let’s hope his delicious burger comes back) so one of these days I’d like to go back to sit on the most romantic patio for brunch.

For now, dinner is the way to go at the bar. With cocktails, of course. My picks for drinks would be the Question Mark, Cliff’s Manhattan and the Bitter Pill.

New Cocktails at the Bar

One thought on “Ben Bailly Arrives at Cliff’s Edge”