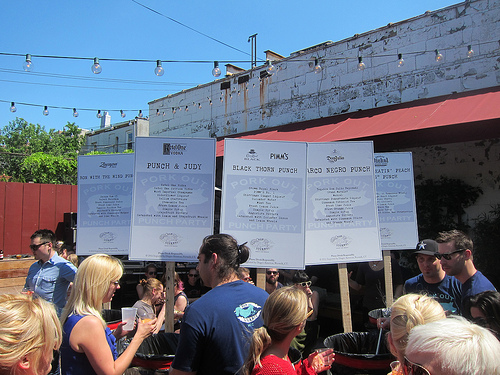 I love the Bon Vivants. When I heard they were throwing a shindig for Manhattan Cocktail Classic entitled Pork Out Punch Party at Union Pool, I marked POPP down my calendar and eagerly anticipated it along with the rest of New York. The Bon Vivants’ Triple Buck at Portland Cocktail Week was one of my favorite events and their Pig & Punch Party at Tales of the Cocktail is generally described as “epic.” 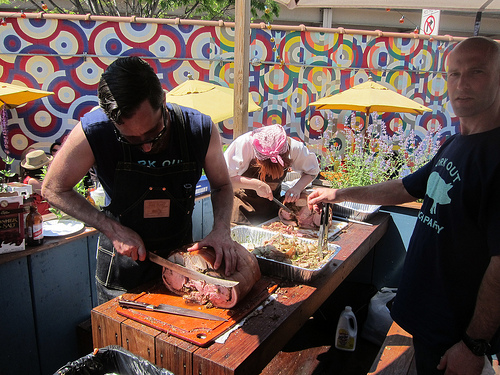 I began hearing just how epic this party was when I learned the Bon Vivants bought four 100-pound pigs that they broke down themselves. They  had to wait until Union Pool was closed for the night before they went in with their rented ovens and started cooking.

My plate of pork, corn on the cob and slaw

The pork was tender and well-seasoned. I also loved the corn on the cob so much, I went back for seconds. The slaw wasn’t just your usual cabbage slaw but full of healthy vegetables. After some shots around the corner, I had a second plate.

Sergio from Chicago with his menubacking shirt

By the way, we did not menuback!

I tried all the punches and my favorite two were the tequila and whiskey based ones; Zacro Negro and Possum Eating Peach Pits. I also liked the Black Thorn Punch as well. See below for the recipes.

The following drink recipes yield one drink. Rocks glasses are recommended. Recipes are courtesy of the Bon Vivants.

Ron with the Wind

Read about Triple Buck with the Bon Vivants

And the first time I met the Bon Vivants in LA

← Brooklyn: The Bar at El Moderno
Costa Mesa: Pizza and Pasta at Ortica →