Recently Chef John Sedlar installed a rooftop garden atop of his restaurant Playa named Cielo Verde. I had a chance to check it out and marvel at the soiless, aeroponic garden. He and his executive chef Kevin Luzande learned the process and decided that Playa would be an ideal location based on the winds and sea level of the Mid-city restaurant as opposed to his downtown eatery, Rivera.

First seedlings are started then transferred to tall white towers. The towers can be built to however high you want but Playa’s are around 6 feet tall. 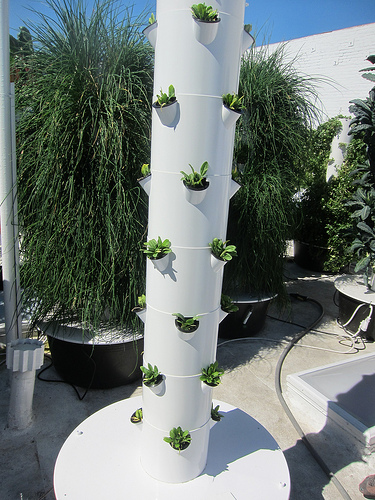 seedlings are transferred to the towers

Playa is currently trying to grow most of its produce. I saw chiles, tomatoes, cucumbers, flowers, corn, squash, Latin herbs and herbs for the mixology program. Chef John exclaimed he had so much borage that the chefs were starting to plate with wild abandon. Normally borage flowers are $.75 cents at the farmers markets and at Playa, four could show up on a dish since they’re growing their own. 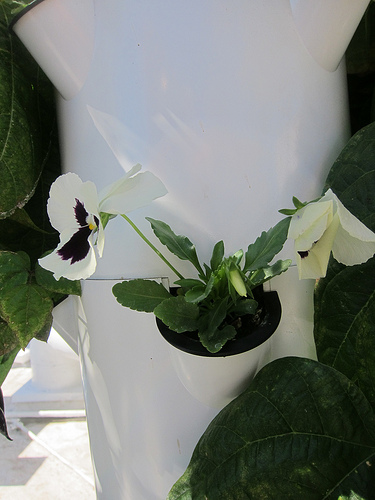 flowers for the tortillas florales

You know those famous tortillas florales and Playa and Rivera? Yep, they grow their own pansies.

The water starts about every 7 minutes and then continues to water for 3 minutes. I love it is the kitchen staff that takes care of the garden. Chef John said he had a lot more respect for farmers now.

Kale! Nothing better than snacking directly on the rooftop.

After checking out the garden which requires climbing two ladders, I was ready to eat! 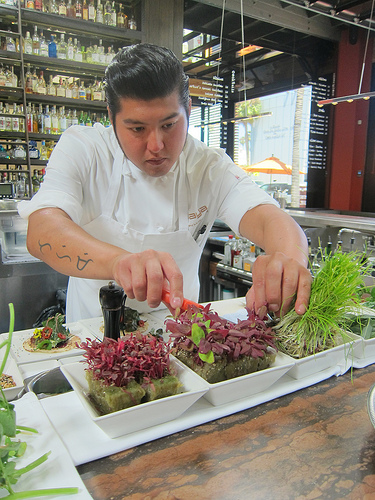 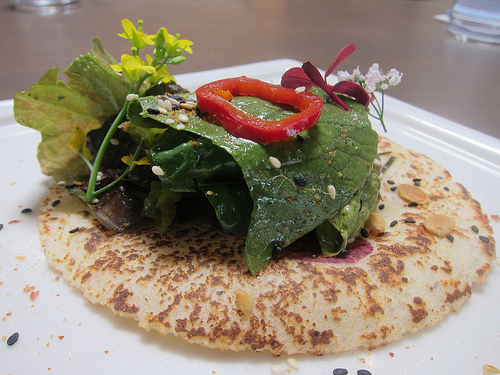 I could have eaten five of these but restricted myself to two. I loved the lightness of the tortillas florales and that I whimsically thought were still warm from the bright California sun. There’s not much of a carbon footprint when you bring the veggies down from the roof. Talk about self-sustaining.

I’ll have to go back to check out the menu again now that Playa is incorporating more of its house grown produce.

Short video of wandering around the Playa garden, Cielo Verde