When Chego! first opened years ago on Overland, I hadn’t met Chef Roy Choi yet. I went, I ate, I assessed, I blogged.

Things have changed a lot in 3 years. I like Kogi, Sunny Spot and A-Frame is my fave of Roy’s empire. But I never went back to Chego. It’s not that I didn’t like it but I didn’t love it. And hearing from Westside friends who do and are upset it’s now in Chinatown is frankly a bit confusing. What was I missing? I had to find out. 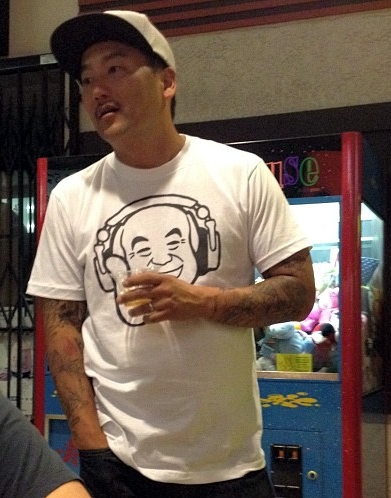 I was born in Los Angeles, Chinatown to be exact. I have watched the restaurants and businesses come and go. Or stay. The Far East Plaza has housed some of my favorites- Mandarin Deli where you could watch the dumplings made and still has the Chiu Chow shop, Kim Chuy.

Further in the plaza was a wonton shop my grandmother would take me to in her later years. This shop is now Chego. As the other businesses close down for the night, including some of the restaurants, Chego says they’ll open until at least 11 p.m. They’re also planning on delivery and depending on the neighborhood, could be convinced to open later. C’mon Chinatown, Echo Park and DTLA residents- show your love.

I was invited to friends and family night so I got to share a bunch of dishes. We sat outside at the communal tables, overseen by the brightly painted kiddie rides. First up was the ooey gooey fries. I didn’t have these before and could see the appeal. They were bit like gravy fries or poutine. They were definitely addicting and worse yet, even crave-able when cold. We could not stop eating these.

I’ve tried but I can’t seem to give up ground meat. And so I obsessed over the the 3 PM meatballs. These are served over polenta. I love hearing how some have added these plain to their rice bowls. It’s like a secret menu item! 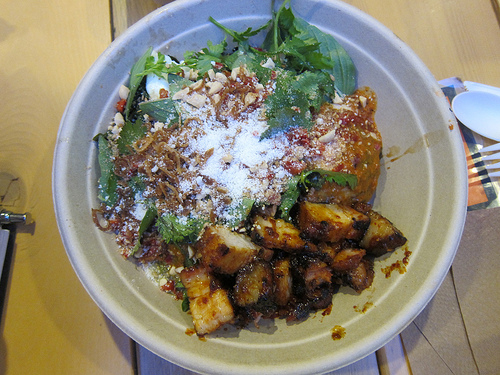 The chubby pork belly bowl probably has evolved over the years. It looks different from when I first had it. Now the chunks of pork are clearly visible. Nicole Kidman and Keith Urban were supposedly at Chego mere minutes before me and this was Nicole’s favorite.

My favorite of the bowls turned out to be the sour cream hen house. Served with you guessed it- sour cream which you mix into the sauce laden chicken and rice bowl,

My friends were going gaga over the Beefy T bowl. I finally figured out why everyone loved these bowls so much. They are the sort of meals I’d make myself at home after a bar hop. It reminded me of a friend of mine who would raid her fridge and pour any leftover banchan, gochuchang, sesame oil and anything else that caught her eye into a big bowl of rice. I just call my version “fried rice.” My friend rice is never quite the same but it is the same “fridge clean-up” idea.

If you think about it, the kimchi spam bowl is the epitome of an epic late-night meal. I’d like bigger chunks of spam (unlike ground meat, I never had the urge to give up spam).

The grilled seasonal veggies were asparagus

Say you want, nay, NEED, big ol’ hunks of protein. Then get the Tiny’s prime rib rice plate. It has the same great sauces many of the bowls have but big chunks of beef. Plus there’s a fried egg, what could be better?

I’ll tell you what’s even better, the Chego burger. I love the burger I fell in love with at Sunny Spot now has made appearances at A-Frame and Chego. Sure, it’s slightly different at each spot but all are great. This burger hits the spot, every time, every where.

Which means I didn’t have much room for dessert. Here are some tempting pictures instead. I’ll have to get the pina krackalada next time. This monster looked fantastic.

I did convince myself to try a smidge of the srirach bar. That was research. After the massive meal, I couldn’t say this was all that spicy but it had a warmth to it, certainly. 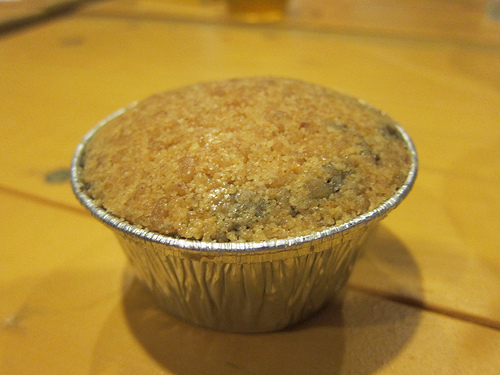 Who am I kidding, I also tried a bite of the tres leches cake. If someone told me this was anything other than tres leches, I would have believed them. I’m generally used to a white cake with the “milks” infused into the cake. This was more like a caramel cake. It was super moist. A win!

Like many others, I hope for a Chinatown revitalization. Chego could lead the way. But first, they have to convince the neighborhood to try their food. They’re getting their menu translated into several languages. There was a DJ spinning when I was there. It’d be cool if they had entertainment all the time or at least on weekends. Make some noise and they’ll come!