Hollywood by the Sea: Littlefork

As mentioned in my cocktail round-up for Littlefork, I tasted my way through the menu over a couple of visits. As a result, there’s a lot of items to go through. In general, I had a great time and would return for the steak, chowder, oyster sliders, maple bacon eggs, cocktails and housemade pickles which are complimentary. I also enjoyed quite a few other things so let’s go through the meal.

When you first walk into the Hollywood spot, there are jars of housemade pickles lining the shelves by the host stand. Littlefork has a great bar set up and the rest of the dining room reminds me of wide dining rooms by the beach. Is this Hollywood by sea? Brunch on the patio will be fun.

On one of the nights I was there, we decided to try the clam chowder. The restaurant was kind enough to serve the four of us with individual bowls — note the portion is much larger if you’re ordering for yourself. I liked the thick chowder. It had just the right amount of cream and the clams were chewy but not tough. 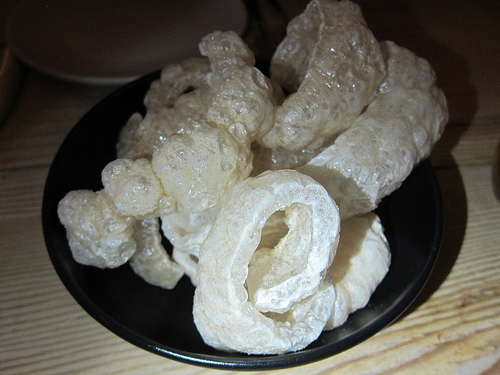 For snacking, we opted for the maple eggs with crispy bacon and malt vinegar pork rinds.

I’m always happy when the restaurant takes a note of how many people are in your party and suggests the recommended number of dishes to order. The maple eggs come three per order but accommodated us with 4 (they’ll do it with a slight extra charge). 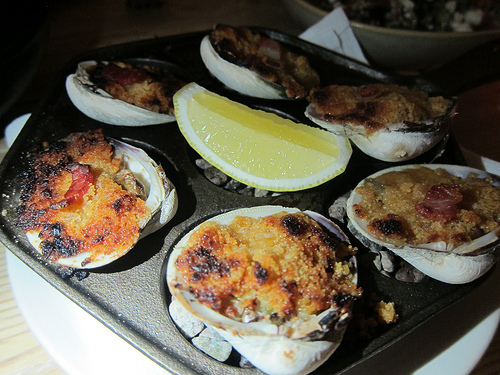 I’ve had baked mussels and oysters before but never clams. I liked the clams casino though I think I like the idea of oysters Rockefeller a bit more because of the spinach. I wonder if they can work in some green onions into this dish? That would be a flavor boost for an already umami dish. The clams have a bacon and cracker stuffing.

On a return visit, I knew I had to try the smoked meats poutine. Oh yes, totally worth the calories. 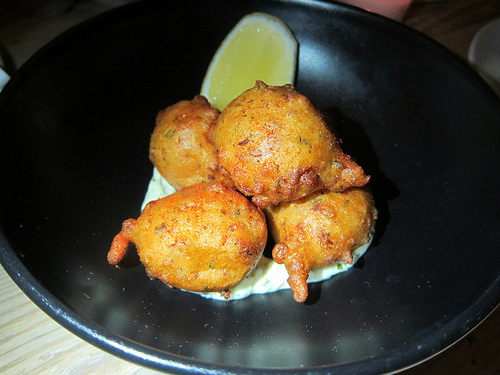 Clams showed up again the clam cakes. These made me think of fritters or beignets more than cakes (as in crab cakes) but they’re so easy to eat, like clam tots. 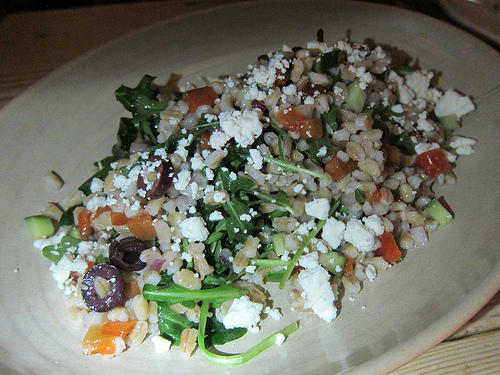 What’s the easiest way to add whole grains and veggies into your life? Salad. Introducing the genius Greek salad with barley. I love barley and I thought this was a great idea. I want to make a version of this for the next potluck I go to.

Moving onto one of my favorite shellfish, we tried the oyster sliders. The oysters were perfectly fried and the small sliders didn’t seem like they’d take up much room since we had more food to go. Oh boy do we have more food to go.

However, my favorite salad on the menu is the warm mushroom salad. With just a bit of parmesan and raddicchio, this is a ridiculously flavorful and easy salad.

I go back and forth on ordering mussels. I think I OD’d on them recently but then I think, “no, mussles (and oysters and clams and lobster and shrimp and and and) are the best!” Littlefork makes a great pot of mussels with sausage. But what I thought was really different were the chickpeas. Eaten all together including the broth, it was a bit like a stew.

When I first went, Chef Jason Travi was introducing a new special, fish sticks. These are not the crappy kind you heated up as a kid. Nope, these are full of fish and served with a good dipping sauce.

My fine dining partner pointed out to me how New England style seafood was popping all over LA. You hardly need to go to the East Coast to find a good lobster roll. Littlefork’s lobster roll had tons of lobster. It was a tiny bit heavy on the mayo and salt for me but a good cocktail solved that. 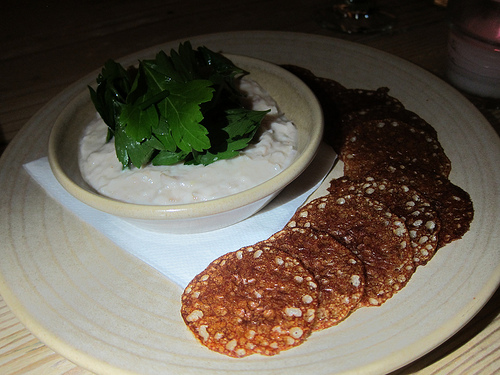 The Johny cakes with sturgeon was very unexpected. I loved the cute little Johnny cakes. With a schmear of sturgeon dip, these were great. 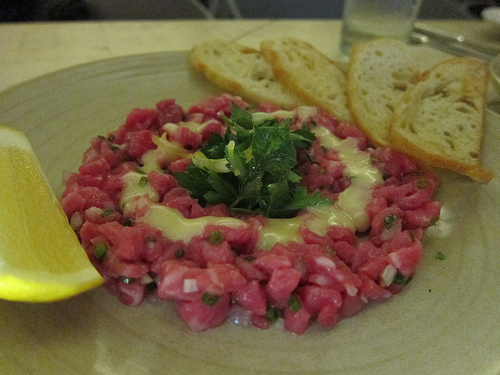 Moving onto the meaty stuff, the steak tartare was amazing. I am pretty sure the bacon Hollandaise had a lot to do with it.

Besides seafood, Littlefork has a sizable apple wood smoked section. We opted for the aforementioned sturgeon and the brisket. These weren’t tough at all. We made ad hoc sandwiches with the toast points and mustards. Pretty soon we ran out of bread and we just went carb free for the rest of the pieces. Meat on meat!

The potato puree with cheese curds and garlic was also a bit salty for me but I can see how addicting this could be.

Sure everyone is serving Brussels sprouts but how many are serving the veggies with chicken skin? It’s like the new bacon.

For a truly vegetarian veggie dish, I recommend the roasted cauliflower. I loved this dish with the pickled yellow raisins. So different and interesting.

I tend to think of duck confit as a winter dish or maybe even fall. However, serving it with greens and a maple cider sauce definitely lightens up the dish. If you miss the carbs, there’s always that potato puree. In fact, that’s how I ate this dish.

I was pretty happy to see the large plates did not go over $30. The most expensive is the steak frites which ended up being one of the favorite dishes of my table. 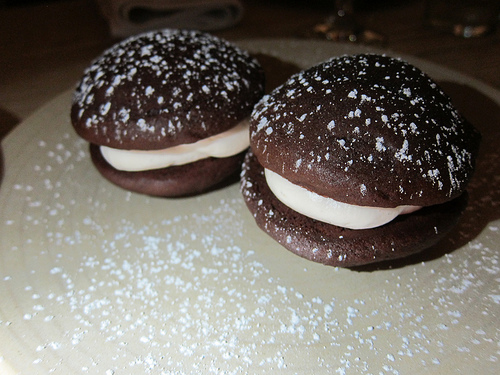 Every time I’ve gone, we’ve ordered the whoopie pie and apple cider doughnuts. Both aren’t very sweet so it’s the perfect way to end our meal.

My favorite of the desserts though are the doughnuts with the slightly crunchy exterior.

Can’t wait to come back to try brunch. I love this trend of finding good seafood in Hollywood.

2 thoughts on “Hollywood by the Sea: Littlefork”