Some say to find good food, follow your nose. But I say use your eyes and see where the lines are. There’s invariably a large crowd gathered in front of Kang Hodong Baekjeong (known as Baekjeong), a Korean BBQ place at Chapman Plaza in Koreatown. It’s not all-you-can-eat so the lines are surprising. Baekjeong has been recommending going to their nearby sister restaurant Ahgassi Gopchang for the same menu if the wait is too long. But it wasn’t too bad on a Monday night.

Baekjeong has two set menus. You can either pick all beef or all pork. It was a hard choice since I would have liked the pork set but I was eating with my brother and he prefers beef. The beef set turned out to be wonderful so I wasn’t terribly upset. You get three meats which doesn’t sound like much when you’re used to eating AYCE KBBQ but it was plenty for two people.

There’s minimal banchan (complimentary small dishes) which amounted to just some squash, kimchi, a small pajeon (pancake) and cool soup. With our meal, we also got salad, a soup of our choice and later we ordered dosirak, a sort of faux fried rice that comes in a metal lunch box. 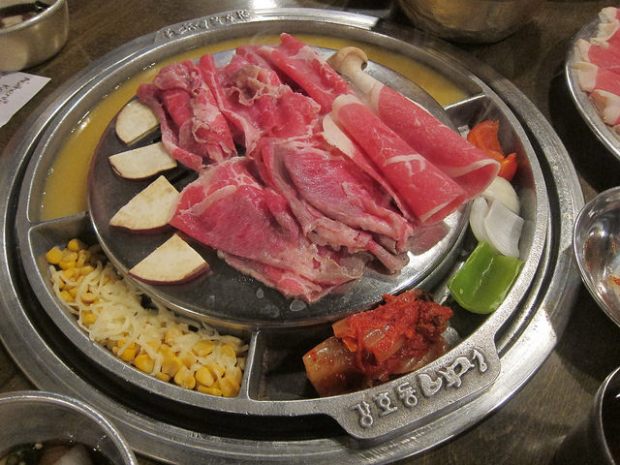 While I like marinated meats, I think starting with un-marinated meats whets your appetite. The grill set up is very interesting as it has compartments. Baekjeong fills half with beaten egg which cooks up into the egg custard I like at Korean BBQ. Another has corn nibblets and cheese. And there is also some random bell pepper pieces, onion and more kimchi.

Next we had some steak. Our grill was switched out for a mesh grill. If you’re unfamiliar with Korean BBQ, servers often come around to help cook for you. Notice at this point our egg has cooked up some.

I opted for the kimchi soup which tasted like tomato beef soup with kimchi. I would get the bean paste soup next time. 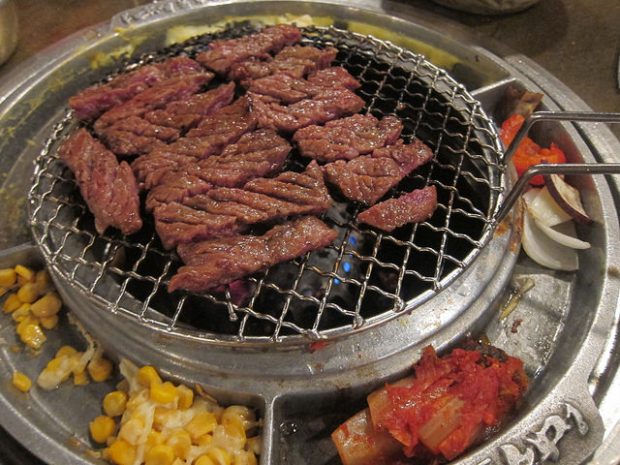 We ultimately did like the marinated beef best. The beef was very tender and juicy. I don’t marinades that are too sweet and this was perfect. 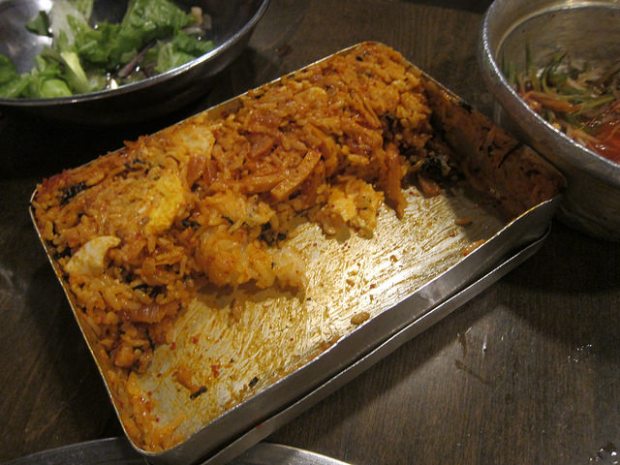 We probably didn’t need the dosirak but I wanted to try out this novelty. It’s rice with a fried egg and kimchi. The servers do a complicated showy shake in front of you to get it all scrambled up before they give you the box.

7 thoughts on “Koreatown: Dosirak and KBBQ at Kang Hodong Baekjeong”