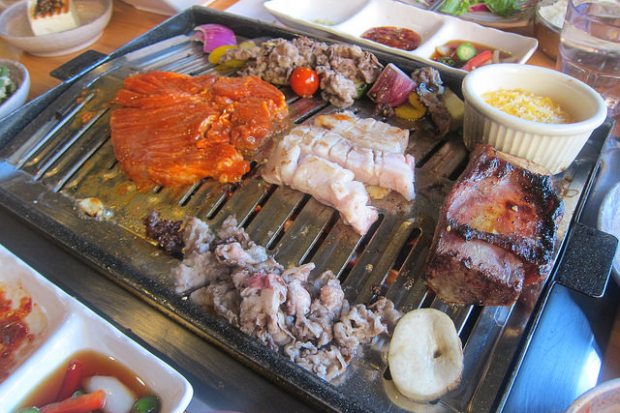 loads of meat for grilling

In the same plaza as the popular Korean BBQ restaurant Kang Hodong Baekjeong, is Quarters Korean BBQ. As you wait in long lines for Baekjeong, you can’t help but wonder if Quarters is any good. The newer restaurant (which took over another KBBQ joint), boasts a huge bar and outside patio you can spot as you tiredly wait your turn to grill your own lunch or dinner. It seems tempting to go over for a beer.

After seeing some positive Instagram photos, I decided to check it out. With our group of 6, we decided to go for the largest combo of meat. It was… not enough. We ended up adding a couple of individual orders of meat. I didn’t want to look at the bill but I rather have gone to Yang San Bak or Star BBQ which are both close to the Normandie Club where we went after dinner.

The only great thing about Quarters is you leave feeling very clean (in comparison). The banchan are light and feels very healthy. And they are trying to capture a young market with colorful cocktails. However, the soju is 2 — almost 3X as much as another KBBQ restaurant. 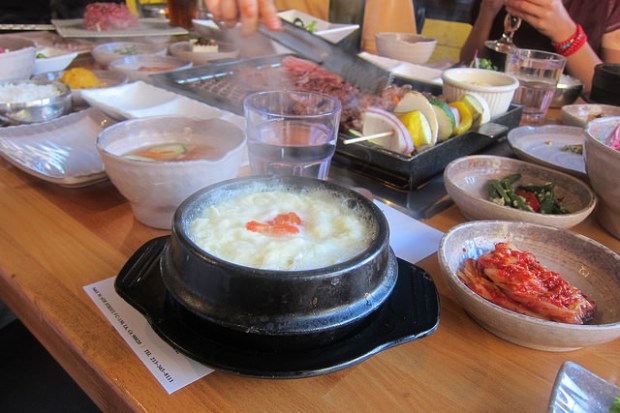 Eventually a steamed egg and soup came out as well. Usually this is my favorite but I didn’t have to fight anyone for it and we had some left over. I did get more kimchi because I love kimchi.

Quarters is probably best known for the little cup of cheese that sits on your grill. It’s good for dipping meats and veggies into at the end. The marinated meats are lightly marinated. My favorites were the brisket and steak. We actually got an additional order of the brisket after we exhausted our large combo.

In comparison to Yang Sang Bak where we only ordered a medium platter that had every type of meat you can think of, Quarters is not a great deal. You go there for the buzz, the music, the hype and to escape the wait of Baekjeong.