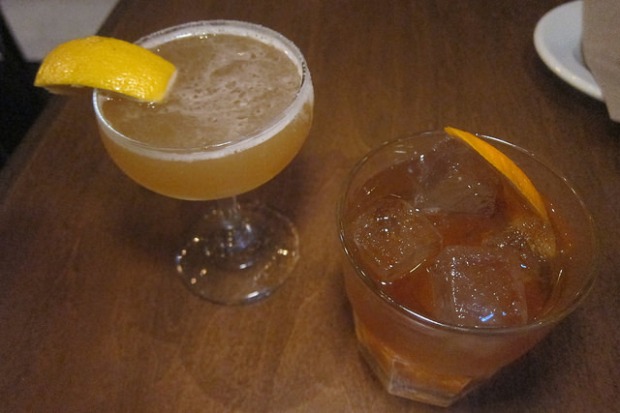 Barcito opened in Downtown Los Angeles earlier this year. It took over the old Chocochicken in South Park. Touted as serving Argentine food, the first drink on the menu is Fernet (Branca) and Coke, what is arguably Argentina’s national mixed drink.

I opted though to go with a Fancy Free, a bourbon cocktail I hadn’t had in a while. My friend had the drink of the day, a Sidecar. I thought her drink was a little too tart while mine was a tiny bit sweet. But I generally preferred my drink over hers, to the point where we ordered another couple Fancy Frees. If we were sitting at the bar, I might have attempted a different drink but decided on the tried and true. 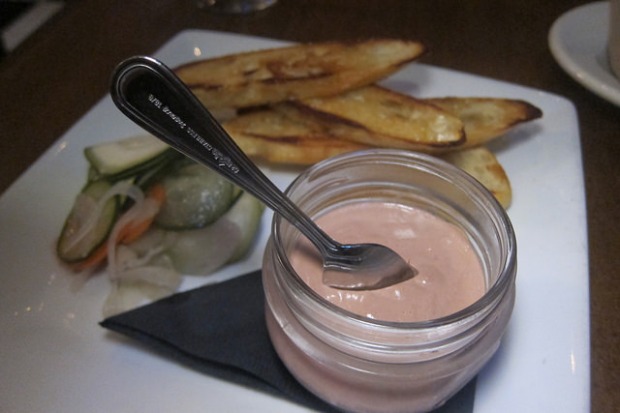 Usually when I’m with this friend, we tend to over-order so we made an effort to restrain ourselves. We got only two appetizers, a salad and two entrees. It’s a Christmas miracle we didn’t order another appetizer and dessert. Baby steps.

Our favorite appetizer turned out to be the chicken liver mousse. There was so much of it, we had to get more toast. It was well flavored and would make a great spread if they ever want to do a California-Argentine-Vietnamese sandwich (banh mi) mashup with cold colds and liver.

Barcito rotates its empanadas daily. They were offering beef when I went. It was described as beef, olives and butternut squash. I didn’t really detect the later two items but it had plenty of ground beef.

The langostinos turned out to be five BBQ shrimp. I know it says shrimp in English in the description but I was really hoping for large langostines.. These were fine with a BBQ-like sauce. What I found odd was it came with two huge things of creamy sauce that looked the same as the sauce for the empanadas. I did like the hashbrowns-like potatoes under the shrimp. Overall the dish was fine but we wouldn’t order this again. 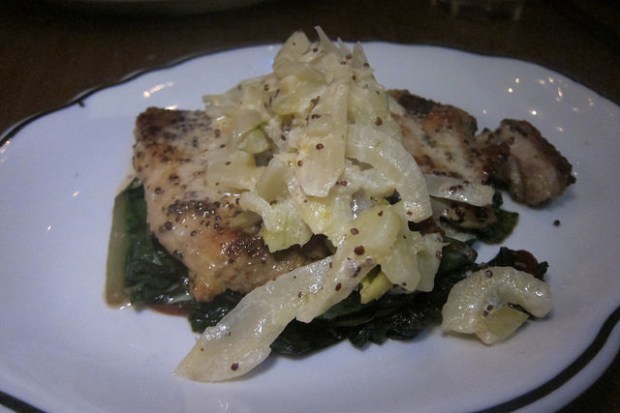 On the other hand, the chicken thigh with Swiss chard and fennel was great. I really liked the whole grain mustard sauce. We had debated the octopus or short ribs but opted for chicken because of the veggies. The couple next to us ordered two of these chickens. True, the thigh is slightly small just as dinner but you would supplement with appetizers (at least that’s what we told ourselves).

I’m glad to see Barcito in the neighborhood which gives more options in the South Park corner of DTLA. It’s on a short list with Stocking Frame and Broken Spanish as spots I’d go for a drink and snack.