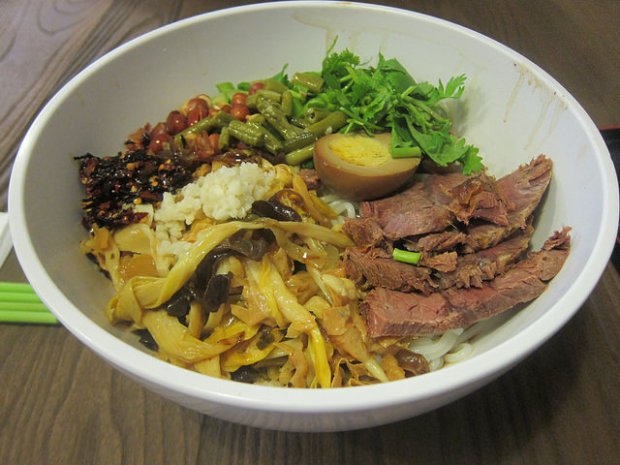 I’ve been trying to go to Qin West Chinese Cuisine for quite a while now. First it was because I never really go to Westwood but then I heard about a location in Chinatown so I set off to find out more about Guilin noodles. Except they’re closed on Thursdays. A few weeks went by then months. As more things opened up at Far East Plaza, I didn’t quite forget about Qin but it wasn’t at the top of my list anymore. Still, it stayed on my list so when I found myself at Far East Plaza hoping to catch Howlin’ Ray’s and realizing belatedly they close early, I was drawn to Qin. Noodles after all are my favorite things to eat. Well, one of my favorite things.

My friend had the dry mix rice noodles since it was a hot day. The big bowl combined lily buds, pickled Chinese cabbage, pickled green beans (called sour beans), stewed hard boiled egg, peanuts and beef shank. You mix everything together with their “secret sauce” which looked like chili sauce to  me. 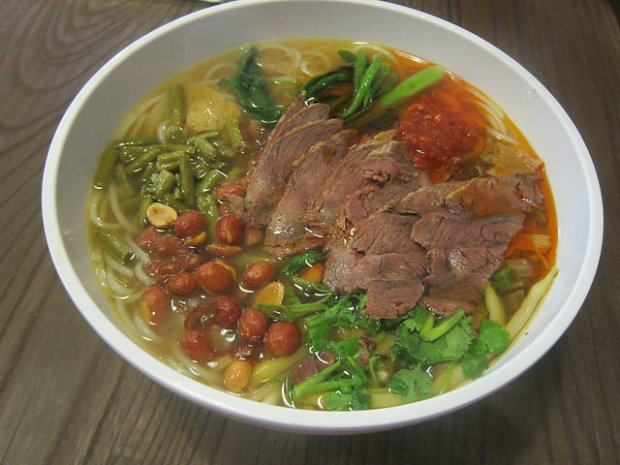 I finally got to try the famous Guilin noodles. I was asked how spicy I wanted it and I said not that spicy. It turned out to be a couple squirts of hot sauce. I was a bit amused by this. Next time, I am going to request the chili sauce. Much like the dry noodles, this had beef shank, pickled green beans, peanuts and lily buds. The soup is very light. I made a valiant effort to finish the noodles but they give you a lot. And at under $8 a bowl, this turned out to be one of my cheapest dinners to date.

I’m glad we got to try Qin as more and more new vendors come to Far East Plaza. I still think fondly of Fortune Gourmet Kitchen and Kim Chuy in the plaza. It’s like visiting old friends while getting to know the youngsters on the block.