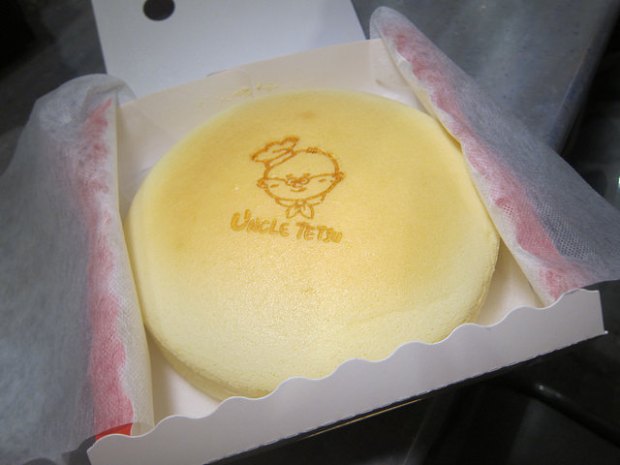 Uncle Tetsu Japanese Cheesecake arrived at the mall in Arcadia a few months ago. It’s in the new “food alley” Arcadia mall built near the Din Tai Fung, Sidechick, Monkey Bar and more. Reports of long lines kept me away. Besides as I told myself, I don’t have much of sweet tooth.

But when you walk by and there’s four people in line, that just means it’s time to get one. Or actually two. I heard there was a two-cheesecakes per person policy. Though later I wondered about that as I saw folks walk away with at least 6 cakes.

Experienced Uncle Tetsu cheesecake eaters recommended tasting the cheesecake immediately and then after it has had time to set in the fridge. It is initially more custard-y and then fluffs up.

I only had it after it spent a few hours in the fridge and I have to say it’s pretty good. Is it wait-in-line-2-hours-good? No. But I would definitely get it again. It’s not too sweet and reminds me of a sponge cake with a slight cheesecake flavor.

Occasionally this branch will offer chocolate or coffee flavors besides the original. Perhaps the next time I swing by, they’ll have coffee. I’d be interested in that one.

2 thoughts on “SGV: Cheesecake Madness over at Uncle Tetsu”