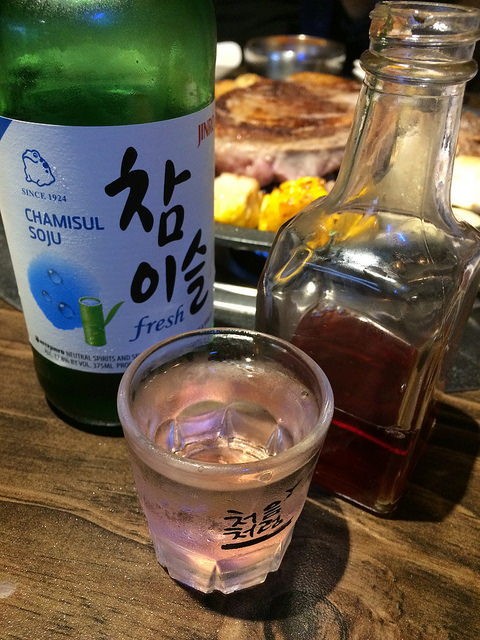 Hungry. Hangry. Late night. Where to go in Koreatown?

We were actually heading towards the popular Hae Jang Chon  (it’s the one with the pig logo) but it was completely packed and had an hour wait. We quickly hit the nearest KBBQ spot and landed at Byul Gobchang.

I’ve noticed lately Korean BBQ places are offering combos and some include alcohol. These are great options instead of an all you can eat spot.

I chose my customary booze at choice while grilling, soju. I loved that Byul Gobchang offered this delicious vinegar to mix with it. I usually see lemons being offered but this vinegar was a neat combo. I felt the vinegar was closer to a good aged balsamic rather than your run of the mill red vinegar. Just a few drops transformed the soju.

We ordered the beef combo and we pretty much had one attentive server helping us the entire time. She efficiently piled on the meat, moved the veggies around and kept the grill going. At Byul Gobchang, they offered tater tots and mini mandoo as part of the banchan (complimentary small plates). I loved that.

We did order some extra dishes including bulgogi and a kimchi pancake. The three of us left stuffed. I’d happily go back here again rather than deal with the enormous line next door.

← DTLA: Lunch at Sakana Sushi Lounge
Koreatown: Having a Ball at Art Major →

One thought on “Koreatown: Late Night KBBQ at Byul Gobchang”