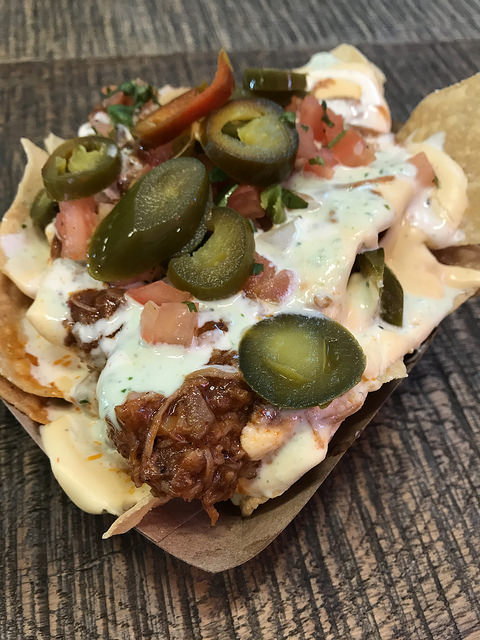 I’m checking out all the spots inside the new Corporation Food Hall in Downtown Los Angeles. I just had lunch at Pig Pen Delicacy.

With a name that has Pig in it, you would expect a lot of pork on the menu and so I found myself a bit confused by the burger. They’re best known for a burger sandwiched between two buns made out of mac and cheese known as the Mac Daddy Burger.

Fearing it would be too much, I got a regular burger and pulled pork nachos. I found the pricing reasonable.

Sometimes I like BBQ sauce but I found this one a little too sweet so I ate a few nachos and called it a day.

The burger was also okay. Maybe I just needed to order that specialty burger, the Mac Daddy,  as the regular buns didn’t seem too toasted. Suddenly I longed for several excellent burgers within walking distance of Pig Pen Delicacy including the Impossible burger at Umami and the pork burger at Wood Spoon.

On to the next stall at Corporation Food Hall (still hate this name).

← Mid-City: The New Drinks at The Ponte
DTLA: Mediterranean at Soom Soom Fresh →

One thought on “DTLA: Lunch at Pig Pen Delicacy”