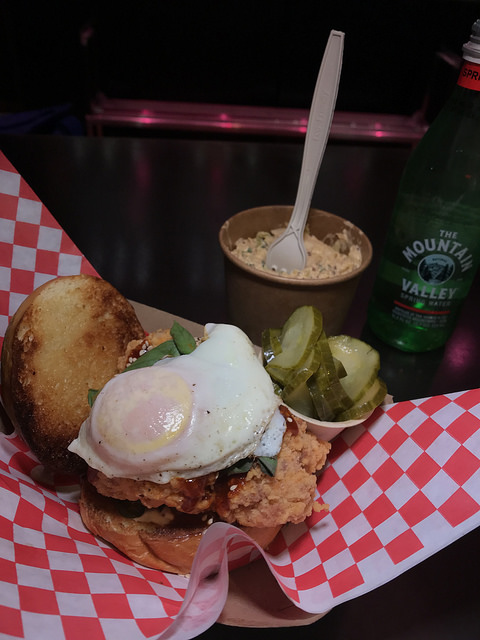 I was very excited to hear about this fried chicken sandwich spot opening from Chef Samuel Monsour of Preux and Proper.

The menu features 8 different fried chicken sandwiches inspired by cities like Louisville, New Orleans, Nashville and more. I opted to try the New Orleans one since I had such a good meal recently at Preux and Proper which is ostensibly NOLA fare though I thought of it as more New Southern food. 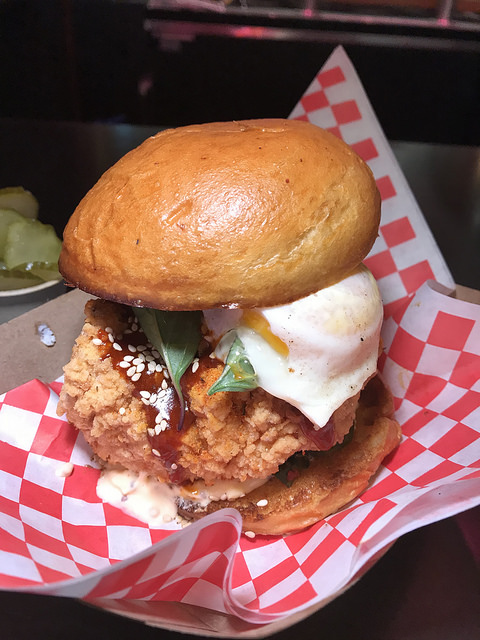 close up of the NOLA fried chicken sandwich

The New Orleans has a lot of Asian flavors coming from the Thai basil, collard greens kimchi and ginger-miso BBQ sauce. A fried egg tops it all and makes it a very messy but also finger lickin’ good (can I co-opt that term?).

I asked the counter guy which has been the best seller so far and his eyes lit up so much I almost reconsidered my order. He said the Greenville is the most popular with the chicken bacon. I’m also interested in trying the Chapel Hill as that’s where chef is from and the Birmingham since I’ve heard a lot about the Alabama white sauce. Sandwiches named after Austin and Miami also round out the menu.

I love slaw and also tried Pop’s slaw. It had much more mayo (but at least it was Duke’s) than I anticipated. I’d probably just stick to the South City fries next time. Or I could just skip sandwiches and have the Memphis juke joint fries which sounds like cheese fries on crack with the smoked chicken bacon.

It’s always good to have new lunch options in the neighborhood.

← Mid-City: Gin and Tonics at Fountain Bar at The Grove
Culver City: Dinner at Sushi K-Zo →