I checked out the Seoul Chicken Company popup at Seoul Sausage Little Tokyo the other night. It’s going on until at least March 15. It’ll be more bento box style during lunch so I suggest going for dinner to share the bucket of chicken!

My friend and I shared the bucket (8 pieces) which we demolished. I was so surprised as I normally will eat about 3 pieces of chicken but the batter was so light and the chicken was so juicy! Next thing we knew, it was all gone.

The chicken is served with four items; the spicy dipping sauce, the salt and pepper mix, the pickled radish and spicy pickled jalepeno. For extra flavor, feel free to dip the chicken in the sauce or spice mix. We used the radish to cleanse our palate and the pepper for an added heat.

It’s so odd that no every spot can do fries right. So it’s always amazing to find some good ones. Seoul Chicken Company does ’em right.

I was also interested in the kimchi fried rice that I’ll have to try next time.

We kept things simple for drinks with whiskey on the rocks, soju and beer. 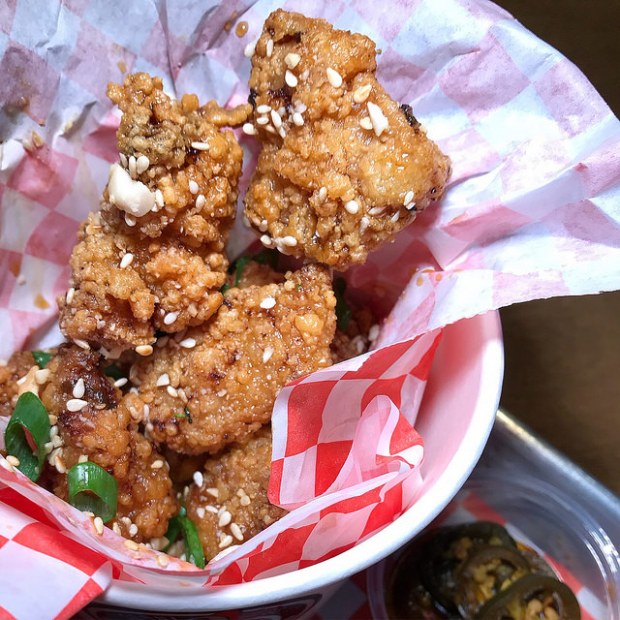 We also tried the “wings” which comes in original, soy and sweet and spicy flavors. Like the bucket, it came with a dipping sauce, spicy jalepeno slices, pickled radish and a salt & pepper mix. Since they wings are more heavily battered and already flavorful enough, extra salt and pepper and/or the dipping sauce was slightly unnecessary. But definitely keep the pickled radish and jalepeno! The wings were also more boneless bites, like nuggets.