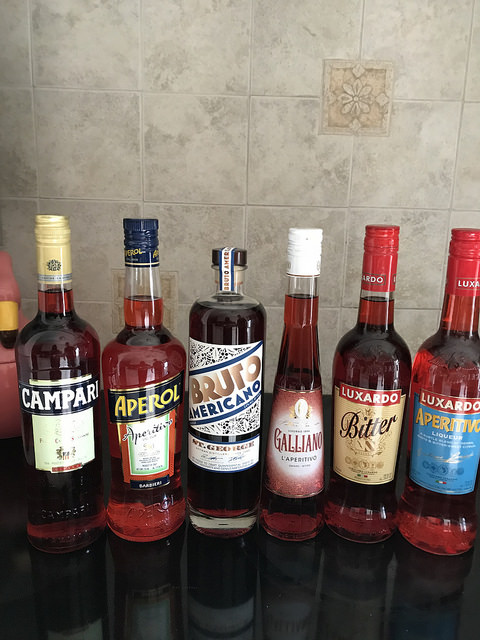 I’m really excited to write about amaro. It’s been an interesting few months of research and now I’m ready to share my love. To kick off The Minty’s Amaro Handbook, I’m starting with the Aperitivo category. It also so happens to be the beginning of Negroni Week today and the key ingredient in a Negroni is Campari, one of my favorite amari (plural of amaro).

First let’s answer what is amaro. The Italian name for bitter herbal liqueurs is amaro. They were first invented to aid in digestion and other health benefits. The lore goes the Italians saw what the French monks were doing with their elixirs such as Chartreuse and Benedictine and came up with their own herbal tonics. Since there is no denomiation de origin (DO) for amaro, I suppose it’s really open to interpretation. But we can agree it is bitter and herbal based liqueur. Many Italian families have their own amaro and the ones we’re familiar with have commercial success. I’m actually slightly afraid to go to Italy because I’ll just fall in love with another 15 or more amari that we can’t get here in the States. Italians used the herbs, flowers, roots, bark, citrus peel found near them though some herbs and spices were imported. Amaro can be made with either neutral grain spirit or wine as the base. The wine based ones tend to have lower ABV. Those might spoil more quickly and should be kept in the fridge.

This amaro handbook may grow to be more than my currently planned 7 posts based on what I think of as amaro categories or styles including aperitivo, Alpine, fernet and more.

With the rise of the craft cocktail movement, these amari have become hit modifiers in cocktails and drinks in the last ten years. For a while I was going around asking for variations of a Manhattan cocktail known as a Black Manhattan (with amaro). It has amused me the last few years as everyone is now getting into amari and some things have been rebranded as such (Jager is a German “amaro” didn’t you know?).

This first category/ style, Aperitivo, all tend to be bitter orange based. And unlike its amaro brethren, as the name suggests, it’s more as an apertif rather than a digestif (digestivo in Italian). Citrus does open up your appetite and the most popular drink you’ll see these orange flavored drinks is a spritz (liqueur + sparkling wine).

Campari – The king of all bitter aperitivo style amari. I love Negronis because of Campari but I also love the rum and Campari drink, Jungle Bird, and a simple Americano (Campari and soda).

Aperol – I’m not actually a big Aperol fan. Oh, it’s fine in a spritz but I feel as a die-hard Campari lover, this is just too weak on the bitter

St. George’s Bruto Americano – favorite after Campari. This will be my new Campari alternative after Cynar for a Negroni variation.

Galliano L’Aperitivo – This is in between Campari and Aperol in terms of bitterness.

Luxardo Bitter – This one was closer to Campari.

Luxardo Aperitivo – This one was closer to Aperol. 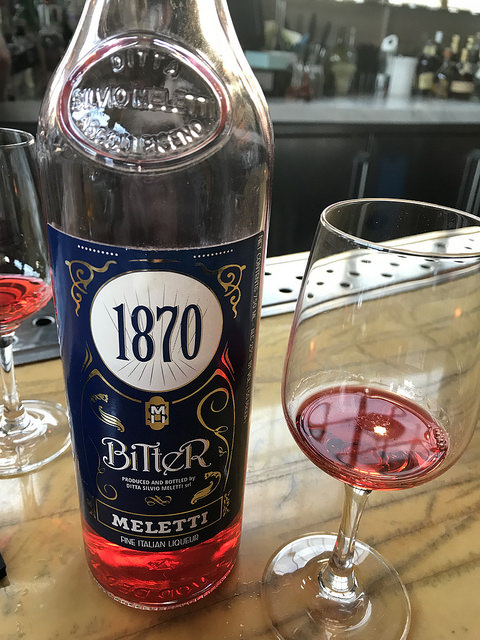 It’s been interesting Stateside to see all the various orange bitters coming onto the market. At some point you have to wonder do we need another Campari or for that mater, Aperol? Well, the more the merrier, right?

I tried the Meletti Bitter over at Rossoblu. 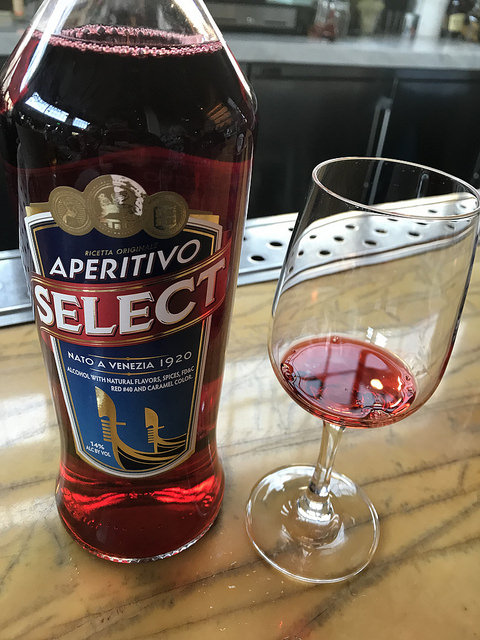 Over in Venice, their bitter of choice is Select and this makes its way into their spritzes. I have to say I didn’t care for it much. Surprisingly, I would chose Aperol over it. Yes, the Select is more bitter but it’s not very balanced. 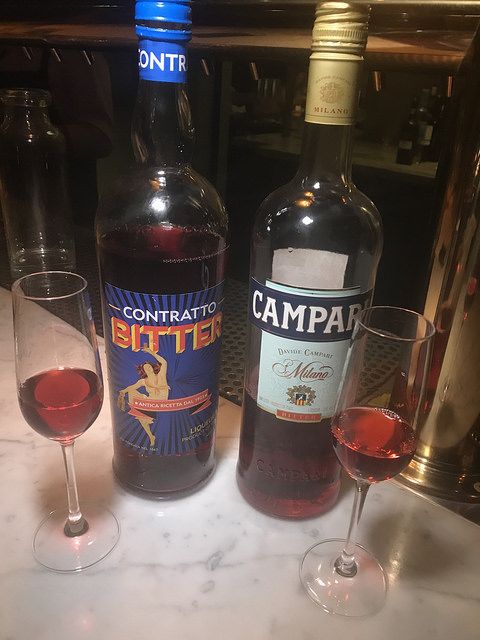 I really enjoyed the Contratto and it was nice to compare it to my gold standard, Campari. I had this over at Redbird which has a nice selection of amari and other liqueurs as their bar is fabulous.

Bitters are an interesting world. We tend to think of them as those small bottles that add a bit of drama to a drink be it Angostura or Peychaud’s or the hundreds of small craft producers now. Well, those are petite bitters and the amari is known as grand bitters. And now Peychaud’s has dived into the big bottles with their Aperitivo. I found the Peychaud’s to be well-rounded in terms of bitterness and sweetness. I wouldn’t kick this out of bed if it was made into a Negroni. 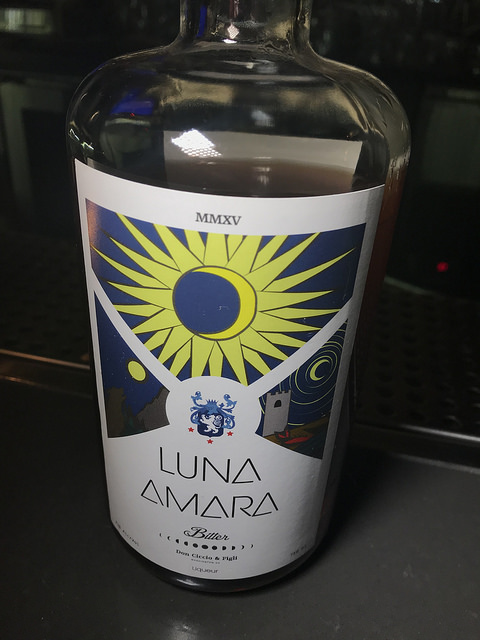 There are now non-Italian producers making amaro. As mentioned, there’s no DO on amaro so we’re seeing stuff from St. George Spirits like the Bruto Americano shown above and several from Don Ciccio & Figli. I tried their Luna Amara, a bitter like Campari and their Cinque Aperitivo  (not shown) which is closer to Aperol.

The Luna Amara is a very round mouth feel amaro. This was a lovely tipple after dinner. 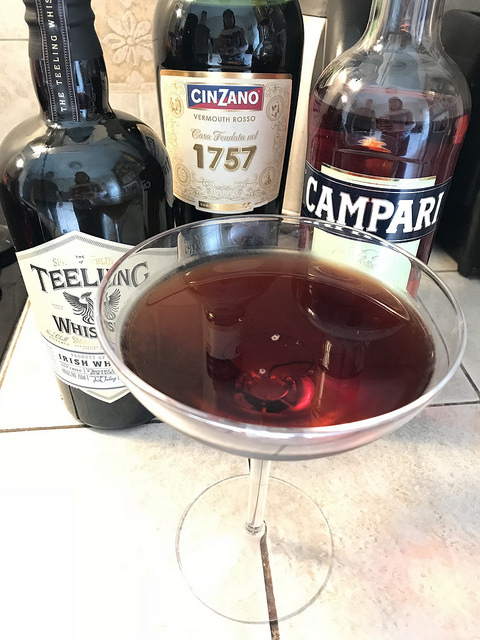 As mentioned, Negroni Week kicks off all over the world today. Learn more at on their site to see if your favorite local bar or restaurant is participating and which charity are they donating too.

A Negroni is gin, Campari and sweet vermouth. I often have those but also variations are nice with whiskey replacing the gin. This is known as a Boulevardier. Or mezcal negronis are fantastic as well. This is a good week to discover new drinks with your (or my) favorite Campari. Although I have also seen a slew of amaro replacing Campari. I do love a good white Negroni as well!

In my next Amaro Handbook post, I’ll be diving into the most bitter amaro style, the wonderful world of fernet! Stay tuned.

← DTLA: Full Service Lunch at Orsa and Winston
West Hollywood: Checking out Dinner and Henry’s Room at Employees Only →