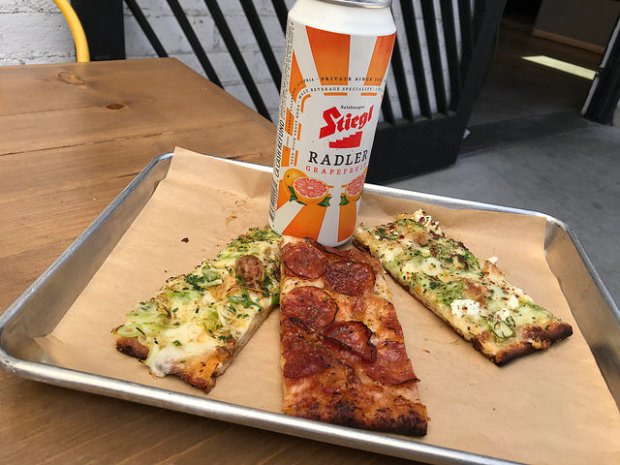 I recently did a food crawl in Highland Park or as the kids said 5 years ago, a “bang bang.” Years ago when I did a food crawl every month, the rules were fairly clear- don’t fill up at any one spot and try to eat at as many spots as possible. Bang bangs are slightly different. These are definitely in second dinner territory. It seems you try to eat full meals at each spot. Knowing there’s no way I could do that, we did the divide and conquer thing. I ordered slices with different toppings as did my friends. Triple Beam Pizza is a great spot for a bang bang (or just a full meal, no second dinner after). It’s a Roman pizza style spot so you get to dictate how much pizza you want as the counter folks will cut as much or little as you want. The prices are calculated by ounce.

Sausage – although the base looked similar to the asparagus, this was a really good slice. I liked how many veggies you got with the sausage.

Salume – if you like pepperoni, you’ll adore this savory slice

Asparagus – the asparagus was shaved thinly to cover the pizza. I thought this would make a great breakfast pizza.

Potato – I also tried the potato (not shown). Like the asparagus, the potato was shaved thinly to cover the pizza. I’m not usually a carb on carb fiend but this was very satisfying.

Eggplant – I love, love eggplant but when the veggie is sliced thinly, I felt it lost some of the magic I love about eggplant. Still, it’s not something I wouldn’t enjoy. I just want more of the sausage.

Triple Beam has beer and wine but if you want a bigger selection, you could take your food into Highland Park Wine which is just behind the pizzaria. However, you can’t drink their stuff on Triple Beam’s patio.

I had my fave grapefruit radler and wondered how many more stops of this bang bang could I accomplish?