On June 2, I went to the LA Underground BBQ Festival held at Los Angeles Ale Works in Hawthorne. It was billed as six of LA’s best BBQ popups together including Bartz BBQ, Kelly’s BBQ, Barbacoa Boys and Grillfellas. There was also going to be a doughnut truck, Hustle N Dough along with some special beers put out by Los Angeles Ale Works.

The event was free but everyone was encouraged to sign up via Eventbrite and if you wanted to, buy line skip passes. There were two tiers for these VIP tickets. One for $25 included two line skips and two beers. The other $15 ticket included just two line skips. My friend and I opted to buy two $15 line skips as we didn’t want 4 beers.

When we arrived, there were only 2 BBQ lines though the guys at Bartz claimed to be three in one. The other was Grillfellas. They had no line. We already felt a bit silly for buy line skips but was infuriated when we tried to use them and was told by the line of people they had been waiting in line for over an hour and half. So? What’s the point of buying fast passes only to have the crowd be rude to us? The line for beer inside was just as bad. People complained how long the line was.

So we already wasted money buying line skip passes because there were only two BBQ vendors despite one saying they were 3-in-1. And only they had a line. We opted for the 5 meats with 5 sides for $60. Some of the sides were out so we doubled up on the mac and cheese and the creamed corn. We also got the BBQ beans. 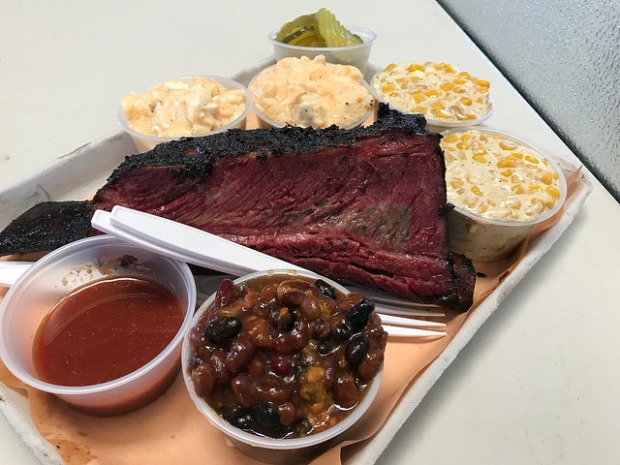 We ordered the pastrami beef rib, pork ribs, pulled pork, brisket and pork sausage. I liked the pastrami beef rib the best and it took me several days to get through my leftovers. This meant unfortunately we didn’t order from Grillfellas which I was sad about because I wanted to try their Santa Maria style tri-tip. Bartz is known for their brisket and pulled pork. I’m not sure who did the ribs but I think Bartz also covered the pork sausage which was sadly dry.

My favorite side was the BBQ beans.

While we were eating inside the brewery next to the band, a group of people started protesting us eating meat. What could go wrong? The band started playing more loudly and pretty soon the protesters left.

By the time we were ready to check out the doughnuts, they had run out!

I might be convinced to seek this amazing pastrami beef rib again but then I think this experience was an overall bust for us.