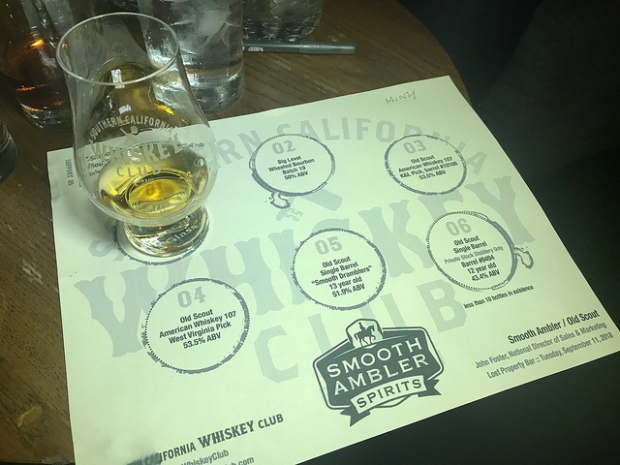 Sadly, this The Minty’s Whiskey Week is now drawing to a close. But never fear, there will be other Spirits Weeks on the Minty and perhaps another week dedicated to my favorite whiskey/whisky!

Today we explore the world of Smooth Ambler Spirits which includes their first releases, Old Scout and I also got to try some special private stock brought out especially for the Southern California Whiskey Club.

The tasting was held at Lost Property bar in Hollywood and it was led by Smooth Ambler’s co-founder, John Foster who came out from West Virginia. 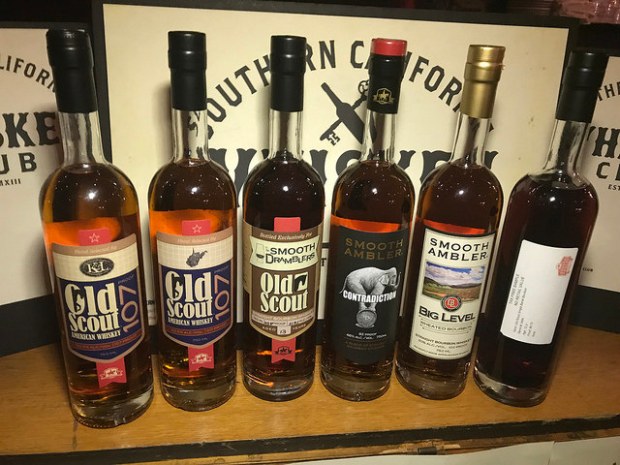 Craft distilling has exploded in the last decade and when new distilleries start up, they have a choice of selling whiskey they’ve bought or contracted for from other distilleries — most then age and bottle it or they start selling white spirits as their own whiskey ages. Or they do both like Smooth Ambler.

Smooth Ambler sold vodka they distilled but it was not as popular as their blended whiskey bottled under the name Old Scout. John Foster will tell you that it’s no secret that their whiskey came from MGP Distilery in Indiana. I was happy he named his sourced whiskey as some distilleries will try to obfuscate the origins of their whiskey.

As mentioned in a previous SCWC recap, members will bring their own tasting glasses to create a tasting where they can revisit each whiskey. Although what’s great about SCWC meetings are there’s usually enough juice for you to go up afterwards to revisit.

I did bring an extra glass so I was happy I got to taste the Old Scout 107 K&L store pick with the one everyone else gets around the country. I’ve been seeing a lot of private select, store picks and the like on the market. It’s always nice to have something that’s unique.

Smooth Dramblers is a Smooth Amblers appreciation club. John Foster didn’t even become aware of this club until recently. And so they created a special bottle of Old Scout for their club called, you guessed it, Smooth Dramblers.

We then moved on to the Smooth Ambler whiskey, the juice they distilled at their West Virginia distillery. We had Contradiction which actually contains a blend of sourced whiskey as well as whiskey they made themselves. It’s a good bourbon and you can tell right off the bat it’s a wheated bourbon. Although it’s quite a bit of corn, I found it not syrup-y sweet. It’s great in a cocktail which I tried in several including both shaken and stirred drinks.

After much anticipation, we had Big Level which is 100% distilled at Smooth Ambler. Previous whiskey showed their skill at blending and aging. Now it’s the moment of truth. Is this good bourbon? Yes and like Contradiction, I’d have this in a cocktail. It drinks a bit young but I imagine in a few years, we’ll be seeing some really great stuff from Smooth Ambler.

And lastly, we tried something from John Foster’s personal stock; an Old Scout single barrel bourbon. And by single barrel, they really mean just this one single barrel they opened up what they thought was an empty barrel and there was just enough to bottle 10 bottles.

A good bourbon reminds me of why I love nutty, caramel, toffee, butterscotch, pralines, butter pecan ice cream. It’s all American and no other whiskey is like it to me.

Lost Property bar is one of my favorite bars. It always has solid drinks. For the welcome cocktail, we had a Brown Derby. This one was made with Smooth Ambler whiskey, honey syrup and grapefruit. 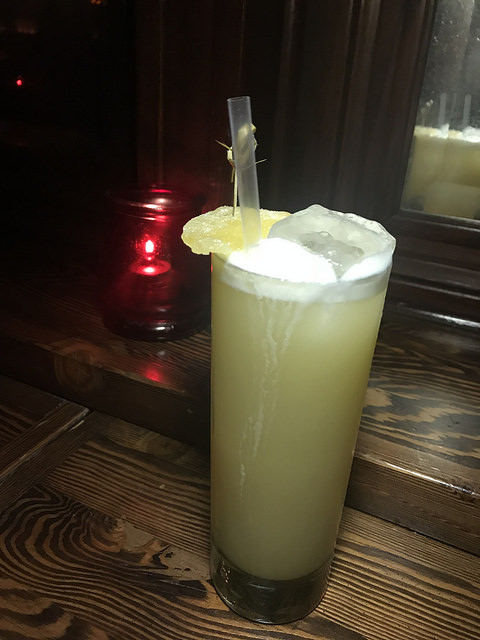 I also tried their whiskey and ginger. This one with Smooth Ambler contradiction and their house ginger. I love housemade ginger beer because it’s always so spicy and zingy.

I was in the mood for a stirred cocktail at Lost Property and I tried their Boulevadier with Smooth Ambler Contradiction. This one was delicious!

Bonus! After the tasting, we went down the street to APL, Adam Perry Lang’s restaurant dedicated to all things meat. The kitchen had already closed but we were able to enjoy a couple of drinks in the beautiful bar. I had a Manhattan variation and also tasted the peach julep. Both were made with Smooth Ambler Contradiction.