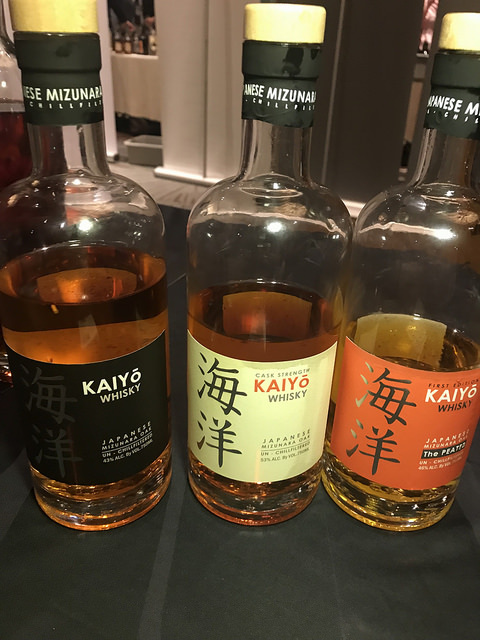 How can it be The Minty’s Whiskey Week without including one Japanese whisky? I recently tried Kaiyo, a Japanese whisky aged in mizunara oak. I learned the whisky is sourced from two distilleries but upon further research, it’s actually a practice called “teaspooning.” That is, when a distiller adds a teaspoon of whisky from another distillery so the buyer can’t claim it as a single malt.

Kaiyo is owned by one of the richest men in Japan. He owns a forest of mizunara oak trees making it an easy financial decision to age the whisky in Japanese oak. It’s truly a Japanese whisky; distilled and aged in Japan in Japanese oak.

From left to right, it was described to us as “breakfast, lunch and dinner.”

Kaiyo (black label) – you’ll see this one on the market. I’ve noticed it at Japanese grocery stores but have been wary to buy because I didn’t know the background yet. Now I’d be happy to purchase.

Kaiyo (cream label) – this one was my favorite. I really could drink this at lunch (and really all meals).

Kaiyo (orange label) – this one is peated. The peat does come from Scotland but I still think of it as so very Japanese.

Kaiyo is going to give Nikka a run of its money as my new favorite Japanese whisky. I’d love to try it in an Old Fashioned or Manhattan cocktail. Or perhaps just stick to drinking it neat.