For today’s Spirits Week post, I wanted to focus on brandy, particularly American brandy. Copper & Kings has been making a name for themselves in the American brandy world.

Copper & Kings has a wide range of brandies falling into two categories:

Next to rum, apple brandy is one of America’s oldest spirits. It’s the native spirit and although we talk more about American whiskey these days, brandy is where it’s at. And where it’s going trend wise.

Copper & Kings is based in Louisville though I was told the grapes come from California. As they’re growing, some of the initial stocks are sourced.

I checked out drinks using Copper & Kings brandy one night at the Spare Room when Lynnette Marrero was guest bartending as part of BevCon this summer. Beverage Director Yael Vengroff also contributed two drinks to the special popup menu.

While I liked both Queen of Siam and Cherry B, I leaned more towards the Queen of Siam. I suspect it’s because it was so interesting to me with the use of aquavit and yuzu marmalade. I love LA sometimes, you get to take the best from every culture– from Scandinavia to Japan all come together in this one drink.

Remember this was over the summer so the Two of Hearts is what I’d call a patio pounder. It was so refreshing. 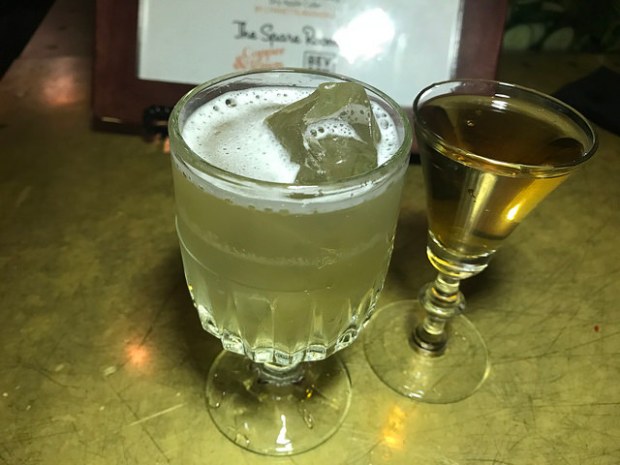 Hit Me With Your Best Shot

Hit Me with Your Best Shot was a drink with a shot of Copper & Kings brandy from Lynnette. It was a fine way to kick off, continue or end your evening. Up to decide which!

I hope to visit Louisville next year and visit the distillery. I hear they play music for the barrels as part of its aging program.