Koreatown: Soup for Everyone at Bon Shabu

My friend and I were craving comfort food one rainy day for lunch. We checked out Bon Shabu in Koreatown. It felt like Chinese hot pot even though it was called shabu. It’s done with a Korean twist.  I remember when this used to be a Korean barbecue spot. I like the revamp of the space and the huge buffet of items to choose from.

There’s also a large sauce bar on the side. I usually just get satay with egg if they they have it or maybe create a soy-vinegar-garlic-green onion combo.

There’s a whole page of soups to choose from. We talked it over with the server and he suggested the two most popular. I usually like a mild one and one spicy. We didn’t get it too spicy however as I don’t like crying into my food.

Bon Shabu had the thinnest slices of meat I’ve ever seen. You may order a few at a time. Faves were pork belly and all the beef.

I was back at the buffet trying the various cooked foods. I have now decided it’s just filler and I rather just cook some more veggies. But the wings and noodles are good for the few nano seconds to munch on before your meats cook up in a jiffy. Also, I may have taken down a lot of kimchi that day. 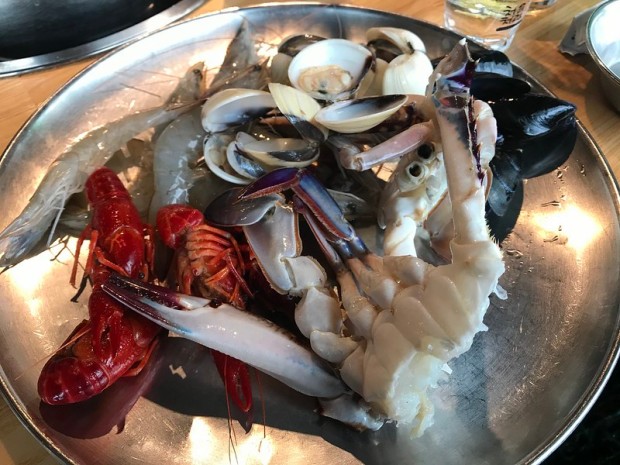 Although it looked good, I would skip the seafood next time in favor of more meat!

If I had to choose between Shabu Hyang or Bon Shabu, I would just pick two days to get both! Shabu Hyang is nice because everything is brought to you but I like “shopping” the buffet for tofu, veggies and other goodies at Bon Shabu.