DTLA: Sandwiches and More at the New Uncle Paulie’s 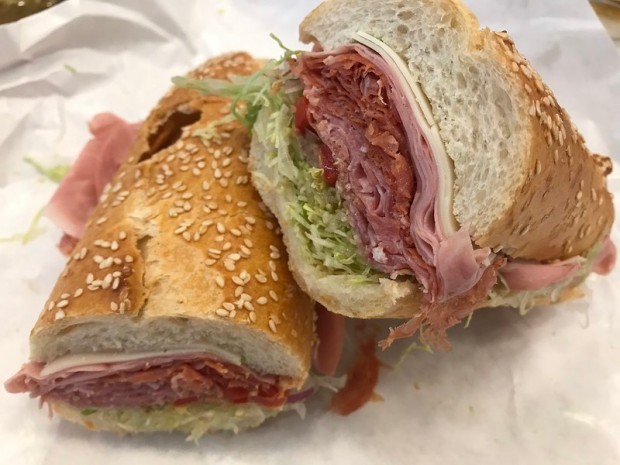 Uncle Paulie’s opened a new location in Downtown Los Angeles a few weeks ago. It’s right in between Peking Tavern and Preux and Proper.

I checked it out recently. Although I’m a big fan of mortaella and there’s a sandwich that features all mortadella, I decided to start with the traditional Italian sandwich.

It’s a good hoagie. But my favorite is still E. Stretto. I’ll probably be at Uncle Paulie’s a lot though as it’s very close to me and I’m always a big fan of finding new DTLA lunch spots.

On the day we went, we were told they didn’t have soups yet but someone ordered one and the restaurant decided to give us the chicken noodle to try. It’s really filling and quite a huge portion!

I actually wanted a hot sandwich to start with and would have chosen the meatball if I hadn’t come up with the genius plan of getting the Italian sandwich and meatballs as a side. I also got the broccoli rabe because I love veggies. My coworker got the chicken parm with potato salad. I didn’t try either but she liked both.

I’m now plotting to do a best Italian subs crawl soon. And Uncle Paulie’s is high on the list.

PS- the pro move is to swipe your sandwich in the marinara sauce from the meatballs.

← Koreatown: Soup for Everyone at Bon Shabu
Las Vegas: Lunch at Flock and Fowl →