I’m almost certain Midtown Lunch would be horrified by the amount of food we ordered at Bottega Louie last week. We completely went over my usual $10 lunch budget. I thought we’d get one appetizer and two entrees. (All right, I would have gone over $10 anyway if we ordered 3 items). My friend was seemingly ravenous and next thing I knew, we had a total of 7 dishes plus dessert and bread! Mind you, some of these things are considered “sides.” It’s a good thing I haven’t been to Bottega Louie in months and I was feeling nostalgic. Plus they just got new dishes as of two weeks ago.

There was a time I used to go weekly. I had my birthday dinner there last year and will always be fond of the (original) peanut butter terrine. But it’s been so long that the server we had last week didn’t even recognize me and we’ve had many discussions in the past about ‘SC (we both graduated from there).

The bread popped up and they now serve it to you on the table. No plates. I guess that’s less dishwashing and better for the planet?

Hm, I like this dish just fine though I don’t think it’s worth it at all. I never like to order things that I can make. But there are certain words or phrases or dishes that create an emotional response. Burrata is apparently one of them. 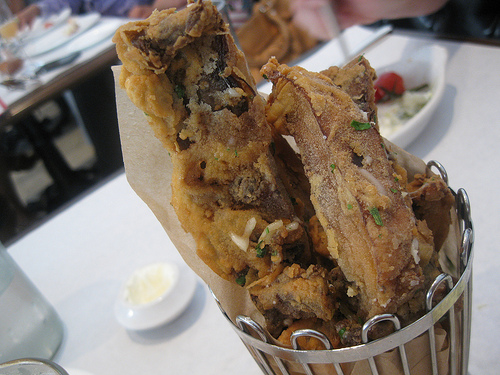 OMG! They have changed the portabello fries. They are essentially the same but the sliced “fries” are ginornous and the batter is much thicker. They also didn’t stick to the fries very well. I’m quite sad as these used to be one of my fave things.

I had higher hopes for this dish but friend liked it. It’s kind of Mediterranean to me. The squid was done right and the ravioli were very interesting, rather ovoid with cool edges.

This dish came out cold. At first I thought perhaps it was meant to be this way but as I saw it steaming merrily away on other tables, I knew we had to send this back. 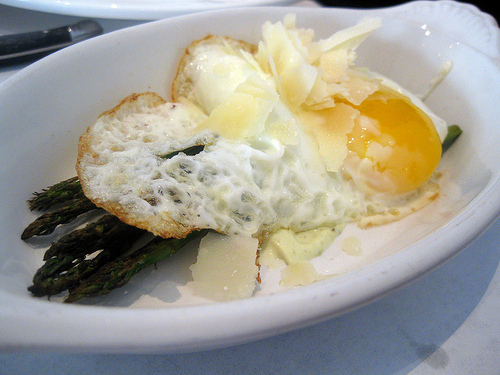 Another dish I wasn’t in love with. The point of baby veggies would be they’re nice and tender. Except these extremely thin stalks of asparagus had been burnt. It seemed to me this dish sat around too because the egg wasn’t very hot.

Hey kitchen, can you not overdo everything? These very thin lamb chops were so overcooked, they were were borderline jerky.

I think I want to cry. 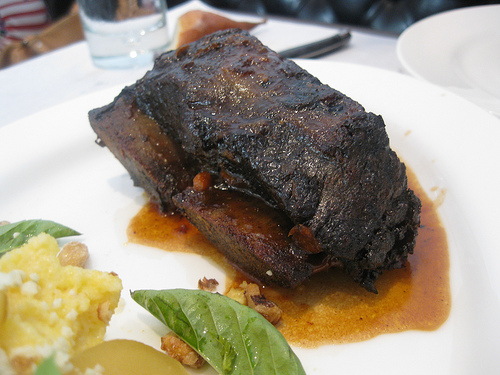 If you ask anyone about my eating habits, I like sauce but I don’t like too much of it. I will be the person that carefully puts just enough syrup on her waffles but it would never flow down onto the plate. That part of me appreciates the very little sauce on this plate. The part of me that wants some sort of moisture for the short ribs would like more sauce, please.

I’m not wholly on board with the polenta being covered in bleu cheese and pear slices. 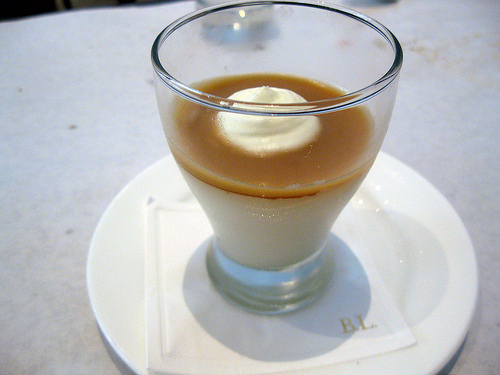 Could dessert save the day?

But the flavor is good.

So the romance with Bottega Louie is definitely off. Although when we sent back that lobster manicotti, our server seemed close to tears. She started ranting (not exaggerating) about how the kitchen has messed up at least 17 other orders and every table has had a problem. Um, not pleasant.

← Shopping the Closet: Budget Hollywood Glamour
When All You Want is ‘Za: Vito’s Pizza →