On our last night in Portland, we wanted to go to a really iconic PDX restaurant. Le Pigeon kept coming up in conversation and we decided to go for it. I hadn’t looked at anything other than their minimalistic website and generally thought the menu looked good. We did have a moment wondering if we should have gone to Little Bird which just opened that week. Little Bird is owned by the same owners as Le Pigeon. One of the chefs described Little Bird as more of a French bistro menu while they have a refined French menu (but with local ingredients, of course).

We made reservations earlier in the day and were seated at one end of a communal table. After putting in an order for salad, two appetizers and two entrees, we couldn’t help but overhear the couple next to us inquire what was the appropriate amount they should order. The server said they should share an appetizer and have two entrees (which really is very normal). I looked at Carina and knew as usual we over-ordered and was attempting to do a tasting menu without a prescribed tasting menu. 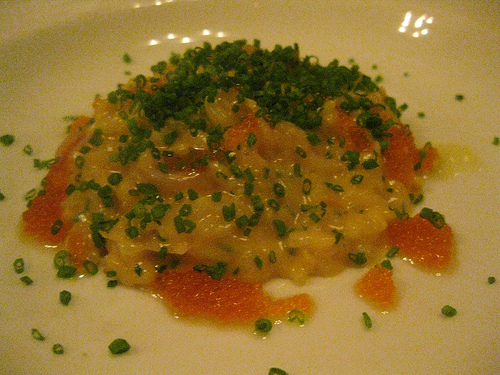 After starting with a simple romaine salad (not pictured), I had the sweetbreads and veal tongue while Carina got the uni risotto. I’ve been on a sweetbreads and tongue kick and how perfect they were served together. Carina’s been on a uni risotto kick (yes, really!) and we decided the little roe in her dish were nature’s pop rocks. 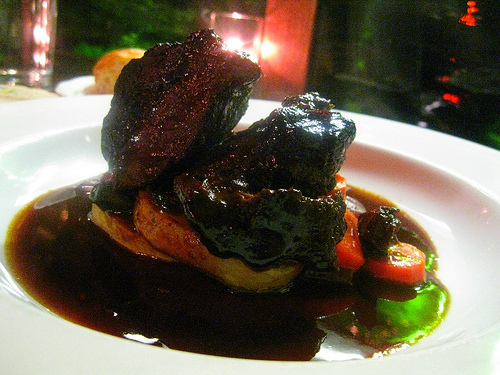 For our mains, I knew right away I wanted the beef cheek bourguignon and Carina ordered the rabbit. I’m not a fan of rabbit usually (too many pet bunnies as a kid) but I admit her dish was tender and tasty. I liked the sage in it. The bourguignon was too salty for me but also very tender. I would have liked rice or mashed potatoes to go with the gravy but the sliced potatoes in this dish were good.

Remember that couple that probably ordered one appetizer and an entree each? They probably shared a dessert, too. Not us. I wanted the foie gras profiteroles and Carina got the honey bacon apricot cornbread with maple ice cream. Oh yeah, baby! I could really taste the rich foie gras in the cold creamy filling of the profiteroles. And since I love cornbread, adding bacon and ice cream easily made it dessert.

Later I realized we had meat in every course except our salad. Now that’s what I’m talking about. An excellent dinner for our last night in PDX.