A week or so ago, I met a chef new to L.A. She just moved from SF and hadn’t immersed herself in the LA dining scene yet. She hadn’t even gone to a single food truck. She wanted to do supper clubs but not the underground supper clubs I’ve gone to– which are private, by donation or a set fee. Her supper clubs are really more like cooking classes in the comfort of your own home. And forget about pop-ups. She’s never heard of them.

I think it’s a great time to eat in L.A. We have those trucks, those supper clubs, those pop-ups. And to top it all off, we have wonderful farmers markets. I love local, organic, farmers market driven menus.  Animal, Fig, Lazy Ox Canteen and a handful more of the same vein easily come to mind. 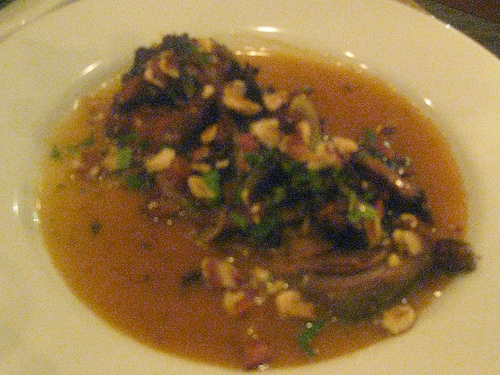 I’ve been trying to decide what sort of restaurant Salt’s Cure is. On one hand, we have the nose to tail movement. On the other, we have people diligent about using local products. Or are the two more or less the same thing? Mixed up and wonderful? There are so many adjectives to use to describe this  style of cooking, I don’t know if there’s a single term. Rustic? Back to the basics? Good food, good cooking, good eats. I decided to just call it New American.

Recently, food critic  S. Irene Virbilia of the LA Times compares Salt’s Cure to some restaurants in Oregon where I recently vacationed. To be honest, I read SIV but I don’t necessarily agree with her reviews. I just had to try it out myself.

Before I went, I was told that people either love or hate the place. And if people hate it, it wasn’t because they hated the food. They just didn’t like the attitude. What I found was service was extremely friendly. The guy who handed us our water jug was quite chatty. Our server checked in on us every few minutes (perhaps a tad bit too much). And one of the owners, Zak, paired our food very well with a pretty great (if pricey) wine list. For all the wine we had by the glass, we probably should have invested in a bottle or two.

My dining partner didn’t think Salt’s Cure was like the previously mentioned restaurants. She felt that cooking was more refined. Salt’s Cure was homey. Or at least reminded her of home, the South. I may not be Southern and growing up in L.A. means adopting many ethnic cuisines as my own, the grits reminded me of masa in tamales. Perhaps the cooking isn’t as refined. I know the name has salt in it but perhaps it was a bit too salty for me at times. And the fatty goodness we were ordering was turning into oily plates. Even the flat leaf parsley was slicked with oil and salt. This is not the sort of homey meal I could eat all the time.

We started with the pickle plate and my dining partner asked if I wanted to try any of the charcuterie. So we got the duck ham.  I flat out rejected cheese. I am not one much for dairy though I do eat it. And without even realizing what I was doing, I ordered the marrow. I can’t pass up marrow if I see on the menu. I was surprised I didn’t order the foie gras pudding but I was eying either the pork shoulder the pork chop. And yet, I went for the pork tongue with chanterelles.

I loved the pickle plate and the duck ham was very good. My favorite was the pickled black radish. I ended up eating the marrow with the bread and sprinkling the parsley on top. Zak came over and said that reminded him of tacos. Hey, what’s not to love about tacos? Having recently tackled a whole (or half) a pig’s head, eating some pork tongue was no biggie. 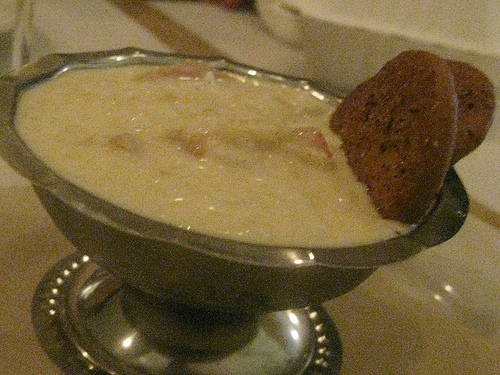 We split the rapini and pork shoulder. The only thing that wasn’t salty this night were the greens with the pork shoulder. We were quite full by this point but I opted to pack up the leftovers so I could see what was going on with dessert.

I love rice pudding. I really wanted to try the persimmon rice pudding, imagining a coral delight. Instead, we got a rather sad rice pudding with chunks of softish fruit that was astonishing in fact there was no discernible persimmon flavor. I was really confused and we left it mostly untouched.

On the other hand, I loved the bay leaf panna cotta with pomegranate. I ate  most of it and glad that dessert saved the day. I didn’t think I would l like the bay leaf but once again, savory or herby desserts work.

I’m told I need to come back to try brunch. And I will. Just as soon as I stop drinking this water. I’m just kidding, that’s called flavor.

One thought on “WeHo: Salt’s Cure”