Romililly and August Briggs Wines at the Foundry

I was invited to a winemaker dinner at the Foundry this past Sunday. Brothers Aaron and Jesse Inman of Romililly Wines brought their exciting Russian River Valley Pinot Noir along with their uncle August Briggs‘ wines to pair with a five-course dinner.

The name Romililly comes from mixing the letters of Jesse (Robert), Aaron (Michael) and sister Susan (Lilly) names. They started their small-batch, hand-crafted wine company in 2006. They source their grapes from growers in the Russian River Valley and the wine spends 10 months in oak and 10 months in the bottle before being released.

The first course, albacore sashimi was paired with a 2009 August Briggs Chardonnay. It was an enjoyable wine and not at all buttery or too oaky.

The brothers were very pleased to see their pinot noir was paired with duck confit. They felt the duck really brought out the profile of the rich pinot noir. It was a great pinot. Their 2006 and 2007 has sold out but the 2008 pinot noir is still available and the 2009 is almost ready for release.

The pork belly was paired with a 2006 August Briggs Charbono from Napa Valley. Charbono is apparently the same grape as Bonarda. Bonarda is very common and practically the national wine in Argentina next to Malbec. This wine was deeper and had the slightest bit of funk which went well with the pork. 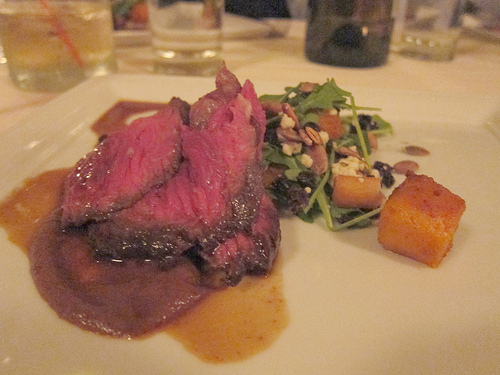 Our hanger steak was paired with a 2007 August Briggs Syrah from Napa Valley. I quite liked the squash and the pumpkin seeds with the salad. The syrah was earthier than I expected. The holy grail of funk that wine lovers love to seek. 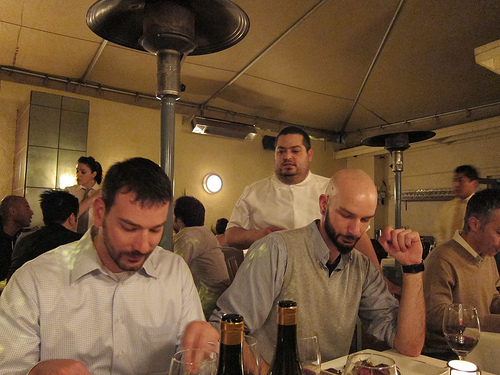 The winemakers, Aaron and Jesse Inman, with Chef Eric Greenspan of the Foundry

Chef Greeny with the winemakers.

Because our dessert was paired with a bold 2006 August Briggs Cabernet Sauvignon from Sonoma Valley, Chef Greeny channeled cheese for inspiration. For me, this was the best pairing of the night.

Romililly Pinot Noir is more widely available in the Bay Area but look for them on more local Southern California wine lists soon. I definitely will also have to find a bottle of that August Briggs Cabernet Sauvignon.

The Foundry on Melrose

3 thoughts on “Romililly and August Briggs Wines at the Foundry”