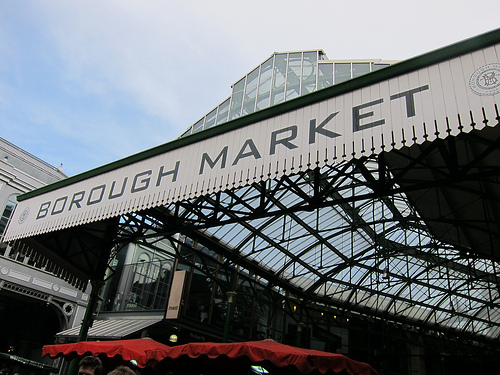 I used to think one of the best farmers markets I’ve ever been to was the Ferry Building one in San Francisco though I do love them all. Borough Market in London is probably 10X larger and with the crowds to match. There were vendors for everything from homely sausage, seafood, cooked food to even foie gras. 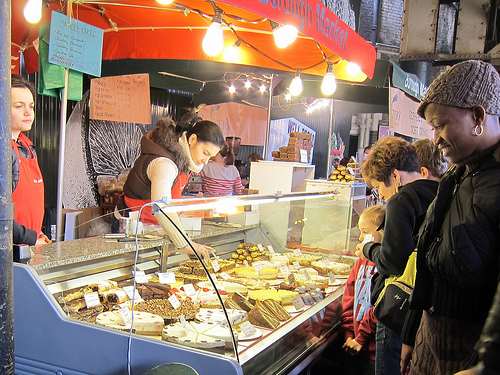 You had to ride the wave of people to get through the market. There may have been some shoving and silent curses as you’re shuffled from one end to the other of the market. One of my dear friends had told me to seek out the grilled cheese vendor. She didn’t know the market but fortunately, I found one at Borough and hoped this was the one she meant.

Kappacasein actually sold potatoes with melted cheese in addition to their grilled cheese sandwiches, well, they call ’em “toasted cheese sandwiches.” It was amazing to watch them heat up this giant thing of cheese and then scrape it onto baby gherkins, pickled onions and potatoes. This dish is known as raclette.

And then the case with sandwiches ready to be grilled. The line moved quickly but almost not quickly enough for me to get my mitts on ’em. 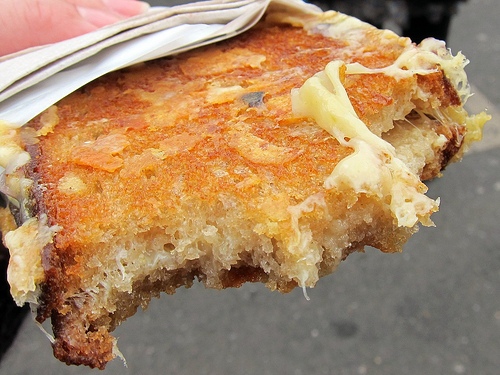 I opted to try my grilled, er, toasted cheese with onions. They also sold a version with pickles.

I loved this chalk board! The missing leg on the piggy (who ate it?) is just so clever. 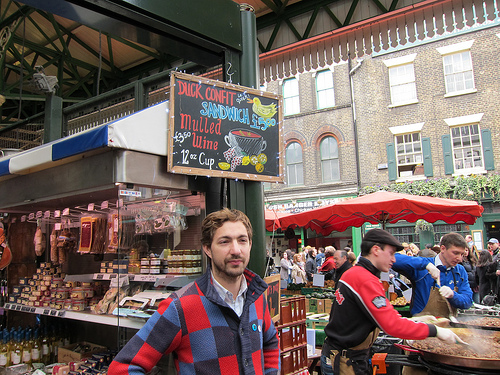 I could only eat so much of the grilled, er, toasted cheese sandwich (damn being lactose intolerant!) so I was off to seek something else. I had considered the duck confit sandwiches but ended up getting a burger. I’m glad I didn’t because this post is so off-putting. But they were really nice and their mulled wine was pretty good! 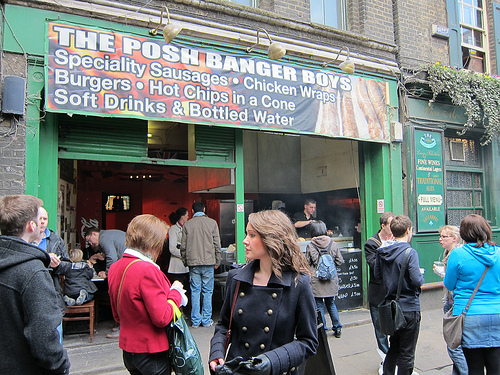 I had spotted Posh Banger Boys when I first got to the market. I had heard burgers are a thing or trend now in the UK. It makes me laugh fancy steak houses are trying to recreate California’s In N Out burgers there. So I thought I’d give it a go.

After they slid the patty on the bun, they asked me what I wanted on the burger. I said, “Oh, no ketchup, no mayo, just mustard- how’s this spicy sauce?” I was reprimanded to be more proactive and don’t say the things I didn’t want. As for the spicy sauce, it was like a spicy ketchup. Eh.

Imagine beef tartare- chunky and pressed into a patty. This is what this burger was. I was expecting ground beef so it was a bit weird to eat half-cooked tartare in a bun.

Good thing I have In N Out.

For more pictures of Borough (and there are a hell of a lot), check out my Flickr set.