The Perch opened officially last Thursday. It’s not just one of the hottest openings but also the most anticipated. For those who loved the Must bar, the Perch is a triumph. Briefly, the owners of the Must were forced out of their space at 6th and Spring.

Now they’re next to Pershing Square, high up above the noisy din of downtown traffic. The views are magnificent. 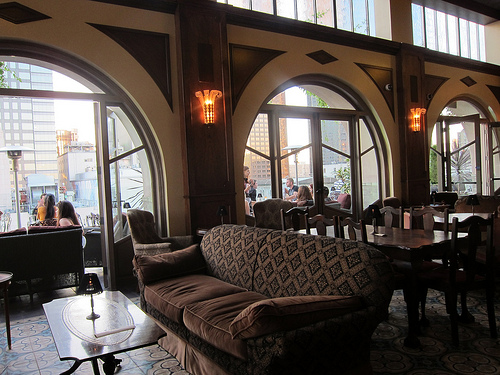 When you enter the building, you’re directed to the 13th floor where you then take a second elevator to the 15th floor. The second rooftop level was closed but we still had a nice of the city through the open windows. The lounge has plenty of seating.

We settled onto cushioned bar stools and studied the cocktail list. It’s a short one. With just four cocktails, it made ordering a snap.

Our bartender suggested I order the 3/4 French. He described it being similar to an Old Fashioned. Well, it’s much sweeter than one. I wouldn’t mind trying the Maverick & Goose next time. Or maybe just go with a bartender’s choice. The bar had some great looking whiskeys.

I’m also interested in exploring the food menu. With a French theme (most of the staff wears velvet bow ties!), the menu features classics like bouef bourginon.

Also, they don’t have happy hour yet but perhaps some day soon.