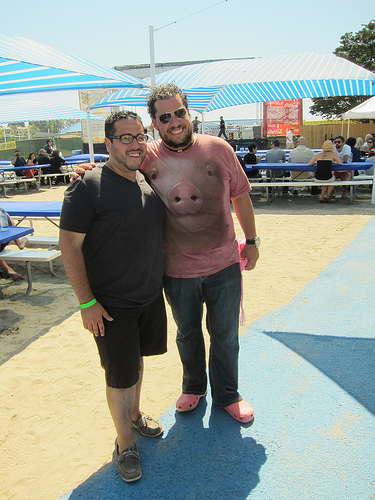 Recently Bobby Navarro of 100Eats100Days and Chef Amar Santa of Broadway Restaurant collaborated on Pig Out, the first pork fest of Orange County. They invited 15 of the top Orange County chefs to bring their best pork dishes. The food festival benefited two charities including C-CAP which helps culinary students and Inspire Artistic Minds, a charity started by Bobby to help those in the hospitality and culinary industries. Chef Amar was a former recipient of a C-CAP scholarship and this festival as his way of giving back. 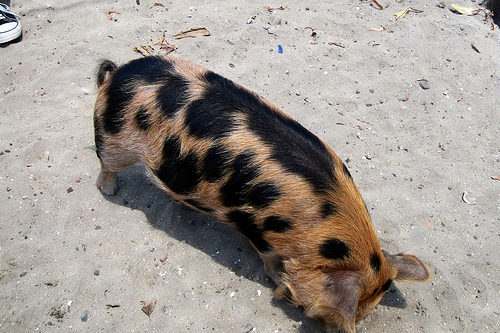 One of the raffle prizes was the live piggy. He was just too cute. 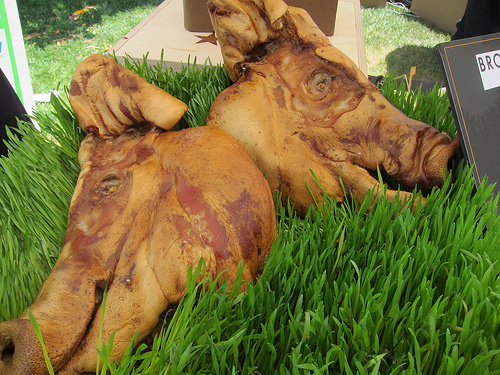 The live piggy almost (I said almost!) made me not want any pork but that thought quickly vanished as I surveyed the dishes. Over at Chef Amar booth, Broadway was serving up a couple of items including a pork French dip with jalepeno marmalade. There was also a crispy pork belly with fennel slaw and BBQ pork consomme. 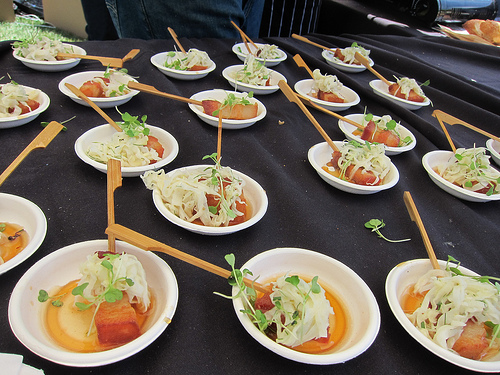 This was a great dish and extremely crispy. It was just perfect with the light broth as a counterpoint. 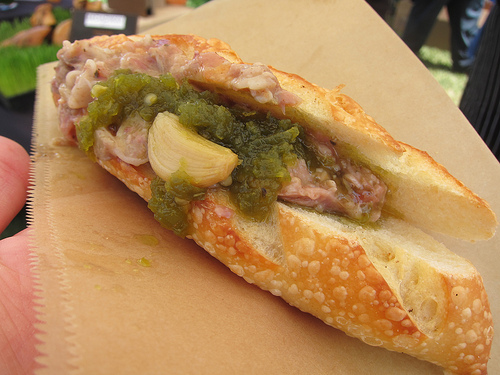 The pork French dip was such a generous portion. I wanted to eat it all but I still has many booths to get to! 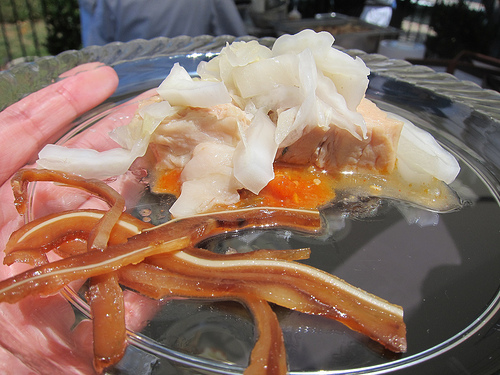 Next door, the Charlie Palmer booth was serving a white miso braised pork belly with a side of pig ears. I love that it also came with a crisp white kimchi. 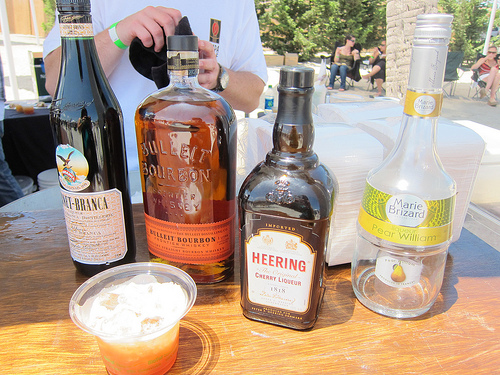 We decided to check out the cocktails as organized by Gabrielle Dion from Broadway. My first stop was to the Napa Rose booth. The boys were shaking up The Bitter Storm (Fernet Branca, Bulleit bourbon, Cherry Herring, Pears William liqueur, orgeat, lemon). Fernet in the morning? Why not? It was delicious. 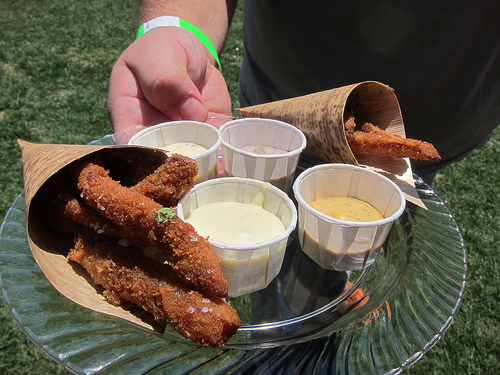 Although friends have in Orange County have invited me to Mozza in Newport Beach, I’ve never been as I have Mozza in LA to go to. I was not surprised by the creative pig ear “fries” they served with four different dipping sauces. This was one of my favorites that day. 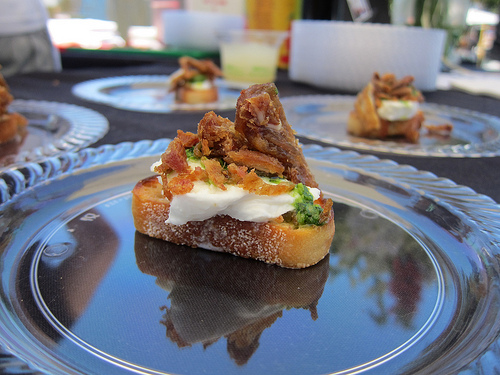 Next booth over, Pizza Ortica was doing pig’s ear crostini with burrata and pesto. I do so love crispy pig’s ears. And combined with rich burrata? Oh, yeah. 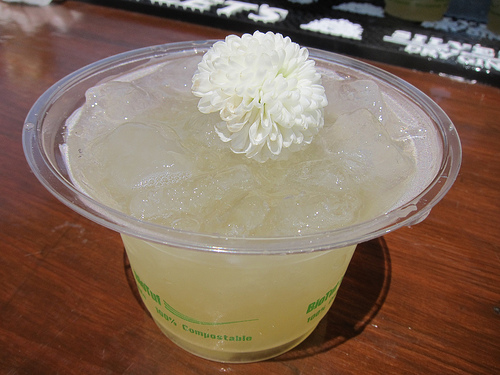 Two40 South bartenders including Felicia Chavez were mixing up a Nolet’s Dry Silver Gin cocktail called Fancy Pants (jasmine tea-infused Nolet’s, honey, lemon, orange, Spanish bitters). I liked it on crushed ice though I wondered what it’d be like served up. I think it’d be pretty good that way. 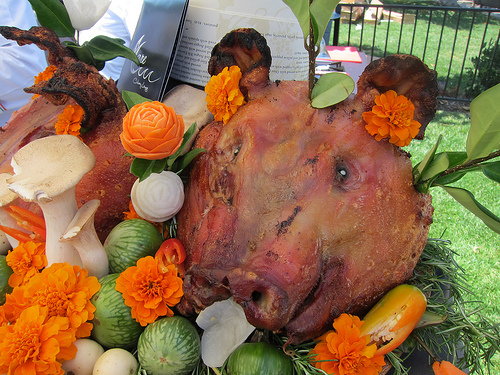 Over at Chef Alessandro Pirozzi of Alessa and Mare, they were doing a pork and foie gras bite in puff pastry. I was enchanted by the foie gras which is now of course banned in California. I loved that I was eating foie gras after the ban in California! Hurray! 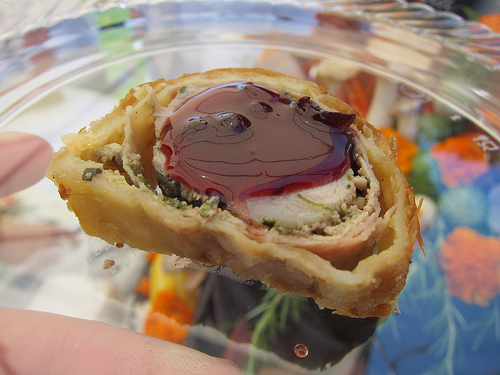 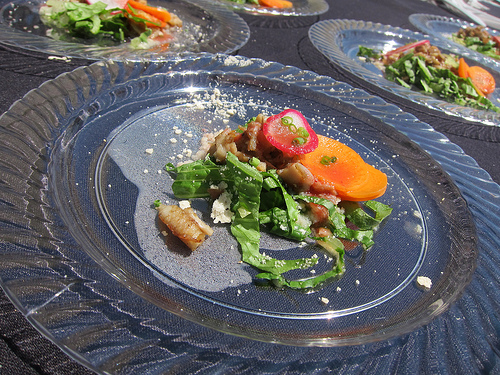 The Crosby rolled out a “deconstructed” taco though I thought of it more as a salad. 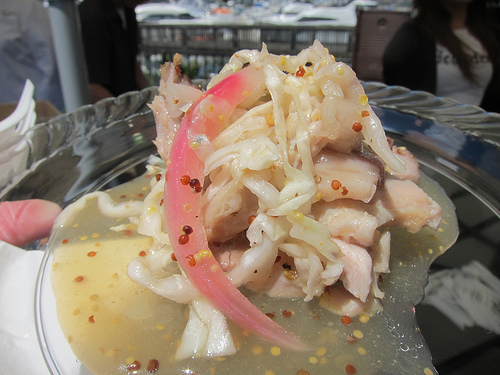 Over at A Restaurant, they were serving porchetta with slaw. It was very juicy which surprised me a bit since I’m used to a more roasted, crispy porchetta. This was good though. I just needed bread to sop up that sauce! Or maybe not. I needed room to eat more pork! 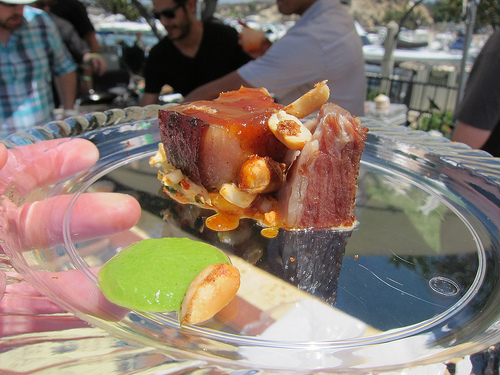 One of my good friends in Orange County has been trying to lure me for years down to OC to try Break of Dawn. It turns out, I should have gone. I became an instant fan braised pork belly. I probably should have tried their pork fat custard but I had so little time…so much more pork to eat! 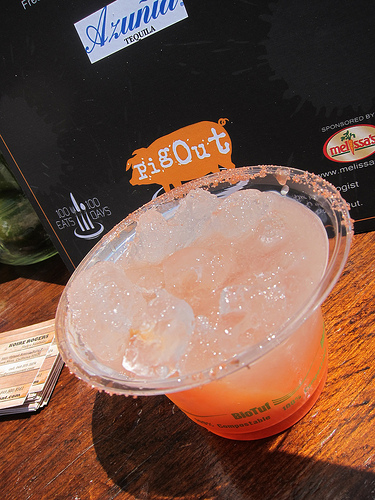 Side Door brought food and drinks and mixologist Koire Rogers was sending out the Red Dawn (Azunia blanco tequila, Aperol, lemon basil infused agave, white and pink grapefruit). It reminded me a bit of a Paloma. The Aperol really played up the bitterness of the grapefruit- a good thing to wash down the grease! 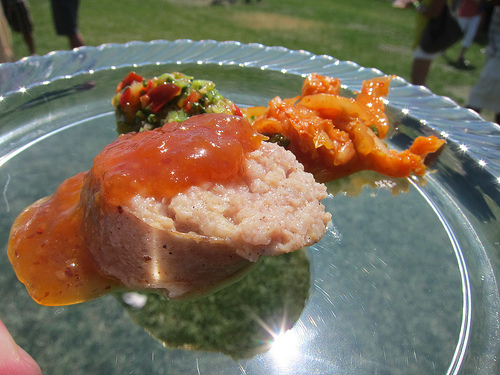 For food, Side Door was handing out sausage. Pork sausage of course. You could also try the housemade kimchi and avocado salad. I could have actually eaten this bite without any additional sauce. 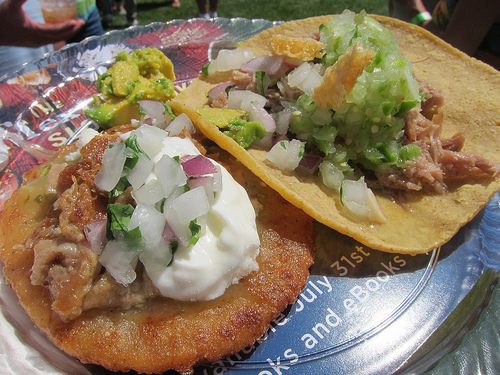 Sol Cucina was the closest restaurant to the fest’s venue and they really brought out the goods. Chef Deborah Schneider was dishing up pork gorditas and tacos. I watched in a slight porky cloud of contentment and a really close to bursting stomach my plate being piled high with extra crispy bits of pork. Even the gordita was fried in pork fat. Some declared this their ultimate favorite. But who’s playing favorites? 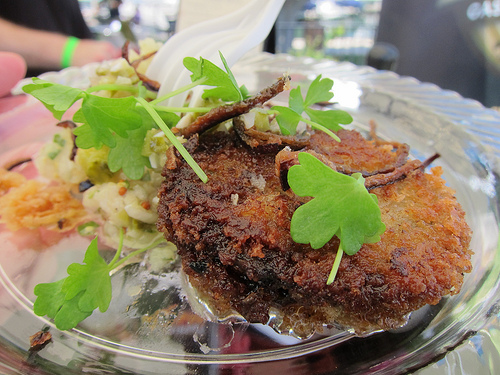 Pig’s feet! The Winery was the only booth that paid special attention to the ham hocks. They served a delicious “cake” of meat from pig’s feet. It was crispy and I also liked the potato salad that was on the side. The garnish? Truffle gribiche and chicharones. Ah, so rich. 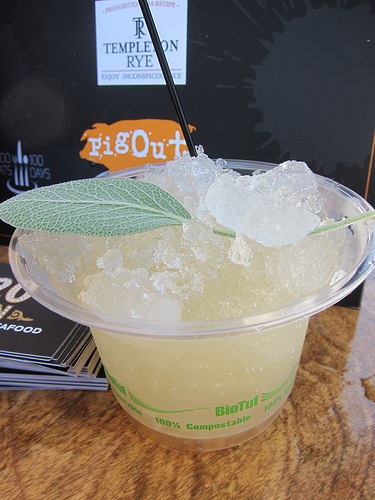 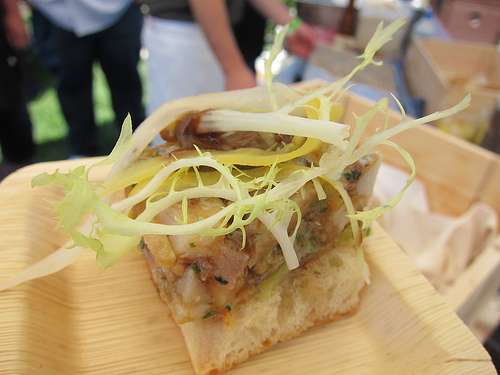 The Loft is the restaurant at the Montage Laguna Beach. Chef Casey Overton brought a flavorful terrine and the most wonderful side. 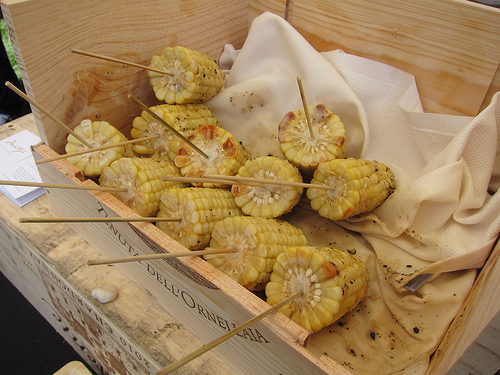 The Loft- Corn on the cob with lardo

How many favorites can one have again? Well, this was my favorite corn — okay, so it was the only corn at Pig Out. The corn had been steamed with kombu and brushed with lardo. Amazing. I’m going to steal this idea. 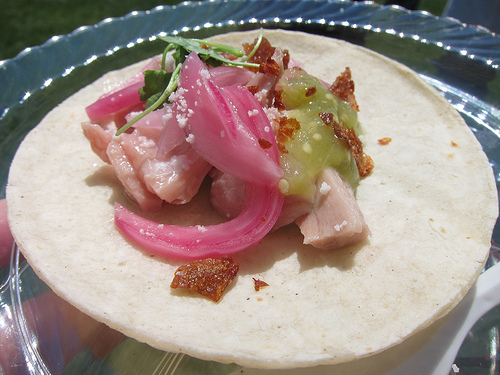 Haven with locations in both OC and Pasadena brought a multitude of items. I caught the last pork taco. 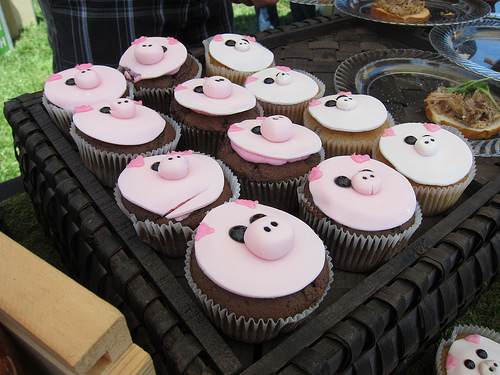 Aren’t these adorable? The piggy cupcakes were baked with pig lard. I didn’t actually try any as I tend not to eat dessert at food fests. But I bet they would be good. I have heard baking with lard is quite common and you get very moist results. 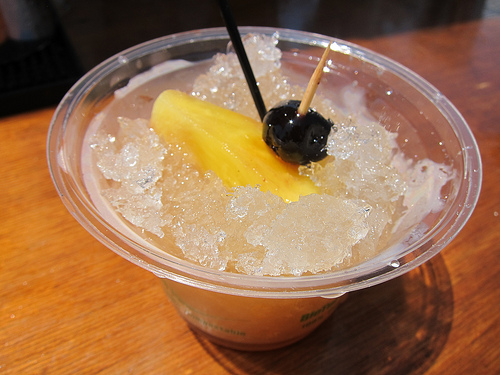 And lastly but not least, I enjoyed a cocktail from Broadway’s Gabrielle Dion and Ricky Yarnell. I know Ricky from Bar | Kitchen in LA but he does work at Broadway as well. He also recently started at La Descarga so I’ll have to tiki it up with him there when I miss cocktails like this classic 3 Dots and a Dash (Don Q anejo rum,  lime, orange, honey, Bitter Truth all spice dram, Falernum, Angostura bitters).

Perhaps I missed it but what I found amusing was I didn’t eat any bacon (other than pork belly) this day. I thought for sure there would be some. I also didn’t see any pig’s tails- my new favorite part of the pig after the ears, of course.

I’m looking forward to Pig Out 2.0 next year!