It seems every time I’m at Ruen Pair, it’s because I was either going or just went to Harvard & Stone. In the midst of so many great Thai restaurants, I opt to go to a tried and true restaurant. It’s generally agreed to be wonderful and I don’t doubt that but I really need to try something new. And I decided I like the noodles well enough but I think the strength of Ruen Pair’s menu is in their appetizers. Take this Issan Sausage for instance, it’s a huge amount of food for just under $8. I think this would be a great appetizer portion for four people.

Like the spicy pork salad I had before, this is served with cabbage. I felt this wedge was sliced too thinly to make a decent wrap. I had so much left over, I made a pseudo-fried rice the next day. The ginger, garlic, peanuts and cabbage added a nice crunch.

When I first went Ruen Pair, I had asked the server about the duck noodles. You either had a choice of the stewed or the BBQ duck. She had then recommended the stewed which came with nice chunks of duck. This time, my dining companion had the BBQ duck and it was very noticeable the duck was just little pieces of fat and skin. There wasn’t much meat to this dish. Good thing we had the sausage to supplement. 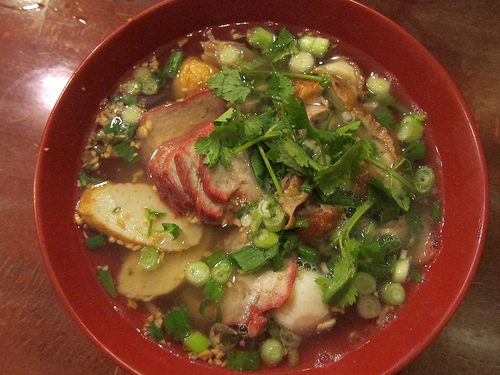 I decided I wanted a combo of toppings. After scanning the list, I settled for the Ruen Pair noodles with shrimp (well, there was one), fish cake, fish balls, a ton of BBQ pork for crunch, bean sprouts. I almost needed more noodles as the toppings to noodles ratio favored the toppings. Normally I’m not a fan of either BBQ pork or fish cake/ balls but for some reason this was a wholly satisfying bowl. The BBQ pork wasn’t overly-sweet and the fish cake and balls were firm.

But as I mentioned, I need to try more dishes beyond the soup noodles. Dare I get the dry noodles or a rice dish next time? Or I could probably be happy just ordering the generously-sized appetizers.