tree at the Nomad

You may have noticed the holidays are upon us and Los Angeles has been celebrating in a big way with holiday themed popup bars all around town.

There are more than 90 bars around the world registered to be a “Miracle” bar with official glassware and cheer.

However, there are others that are just as festive including Blitzen’s at Here and Now and the decked-the-halls-out Nomad Hotel with their Holiday Spectacular in Downtown Los Angeles. LA’s official Miracle bar is at Ever Bar at the Klimpton Everly in Hollywood.

And there’s a Die Hard themed holiday popup over at Spring Street bar in DTLA. Since Bruce Willis is my old man crush, I had to go over there. 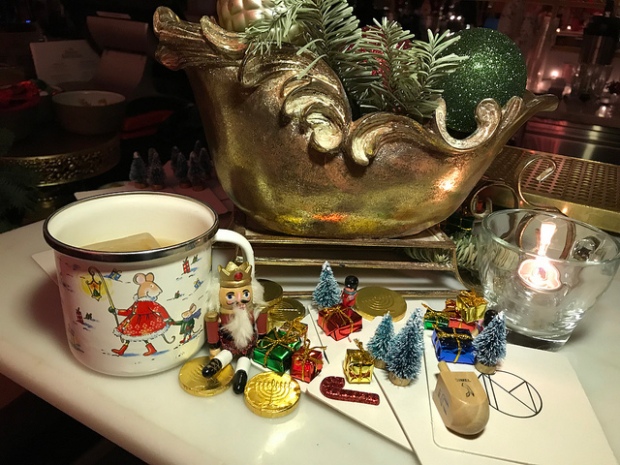 Hail Santa at the Nomad

Holiday Spectacular runs every Thursday, Friday and Saturday during the month of December. Nomad has a list of original holiday drinks but also feature guest bartenders. I went when the list included three from Christine Wiseman, the bar manager at the nearby Broken Shaker.

I tried the Hail Santa which I loved! Christine has a great palate and I’m not surprised how well thought out this drink was. Combining my new love of brandy and my forever love of whiskey, this is The Minty approved.

Into the Woods at the Nomad

Then we got into the rest of the list. I got Into the Woods which I enjoyed. The sour was impressive looking in a beautiful snow white coupe. If you love pisco or whiskey sours, you’ll enjoy this winter spin. And don’t worry, the Douglas fir liqueur isn’t like drinking Pine Sol. It’s very subtle.

Hot Buttered Rum at the Nomad

There are a number of warm drinks on the list but I decided to go for the Hot Buttered Rum. I hadn’t had one of those in a while. As a fan of butter pecan ice cream, this is what hot buttered rums remind me of. Although I don’t understand the trend of butter in coffee at all! Still, butter- good. And booze- also good. So, yes, it’s recommended. Plus, if you’re going to order such a drink, don’t be surprised when the descriptor says, “from Santa’s lips to your hips!”

Winter Wonderland at the Nomad

I asked the bartender for the most instagrammable drink. Yes, sometimes I do this even in a clearly everything is instagrammable situation. He recommended the Winter Wonderland. He didn’t describe it and I was surprised by the blinking Christmas lights. Ah yes, this is instagram worthy. Be sure to get video!

But the drink? It’s a milk punch with squash. Oh, and yes, rye and rum. The squash is not weird at all, actually. It gave the drink some heft.

Over at Here & Now, the space has been transformed into Blitzen’s, a holiday drinks mecca.

As mentioned, there’s a goodly number of drinks on the menu. I tried my best to get them all but alas, it was too big of a task to complete in one night. It’s a good thing there’s the entire month to enjoy this popup at Here and now. Hannukah may be over for the year but you can still get Eight Crazy Nights there. It’s a little on the sweeter side for me but I just waited for the ice to melt a bit. I loved the Gin and Tidings, however. The fresh pine needles was a great garnish. It’s a winter gin and tonic (or soda in this case).

Do shots begin your night? Well, they should. Get the Sleigh Back shots. They’ll get your holiday party started just right.

While I was talking to my friend how I was in search of a good hot chocolate, I had an amazing one at Here and Now. This is Santa’s Nightcap and I can see why. It should be your last drink of the night despite what you think of hot chocolate. Brown and boozy as it should be! 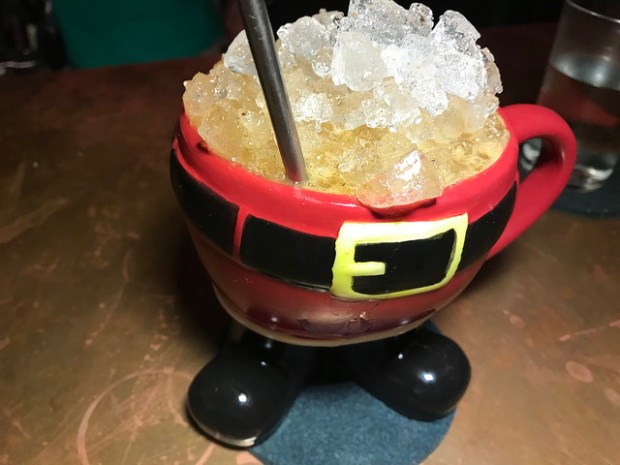 Santa is one stealthy guy and this drink can sneak up on you like Santa. One minute you’re enjoying a frosty (no relation to THE Frosty) and bam, you’ve fallen down the chimney.

Getting Blitzened at Here & Now

I was so distracted I didn’t actually try this drink my friend got but it’s classic whiskey brown bitter stirred drink I’d approve of. All the more reason to return!

By the way, you may be wondering about this Miracle glassware at Here & Now. When the bar was Westbound, they hosted the Miracle popup. They were closed during the registration process for the Miracle popups. When they opened as Here & Now, they decided they couldn’t miss this Christmas season though and Blitzen’s was born. 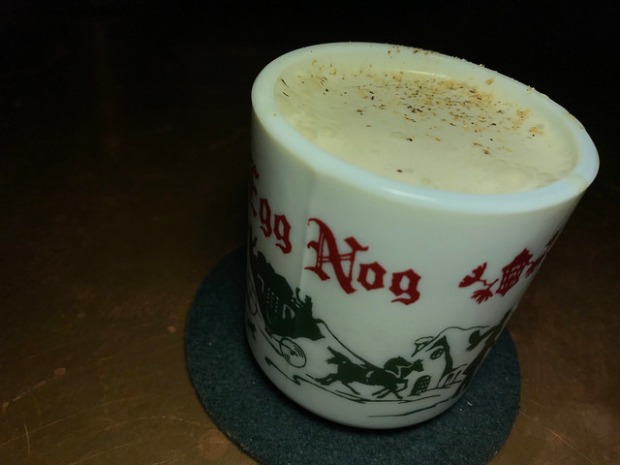 Hands down, the Oh Holy Nog is the best egg nog I’ve had in.. a zillion years? I like nog okay but I would return for this over and over again.

If you’re more in an apple mood, I’d get Frosty’s Final Thrill.

Gingerbread Man features a stencil design of a gingerbread house. It’s too cute.

I love sherry drinks and sherry helps keeps this rum cocktail from being too overwhelming. The spicing is very subtle.

Blitzen’s at Here and Now

Every day until December 30

People debate if Die Hard is a Christmas movie. Well, the fine folks at Spring Street Bar has decided it is and there’s a popup going on until the end of the month. It’s pretty low key with a garland celebrating Nakatomi Plaza and some pictures of Bruce Willis on the back bar. However, the fun is in the cocktail list. I was sad they were out of egg nog but I did get to taste a couple.

Bonus! Spring Street bar is also selling Twinkies for a couple of bucks.

I got the Does It Sound Like I’m Ordering Pizza which was an Old Fashioned variation. The whiskey has been bacon-washed. It was very subtle.

As mentioned, I really wanted the Hans Gruber egg nog but they were out. There was another creamy drink, I’m Your White Night with Kahlua and Bailey’s Almande but I opted to go with the Yipee Ki Ya Mother Fernet. Because, Fernet-Branca. It’s essentially a Toronto (Fernet Manhattan). 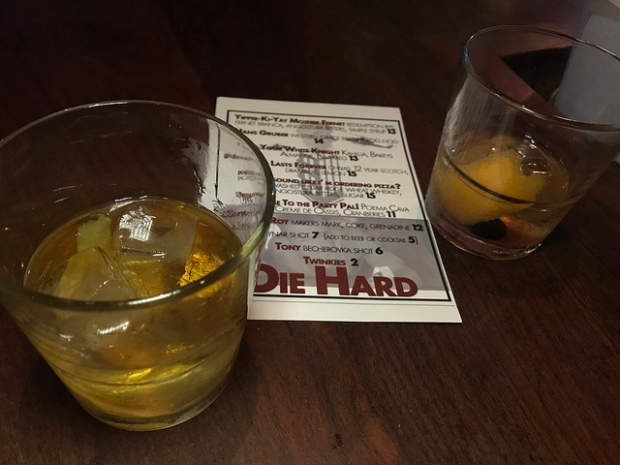 My friend had the Nothing Lasts Forever which was really good.

I haven’t been in for lunch in a while but should go soon because I hear you can turn the sandwiches into salads. Apparently the cauliflower sandwich is the winner.

Die Hard popup until end of the month 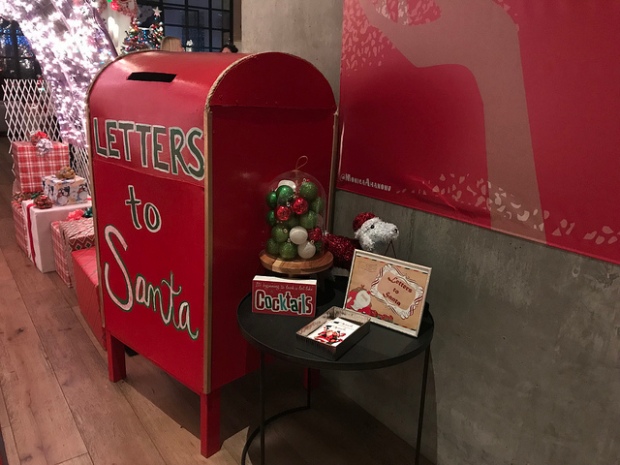 Letters to Santa mailbox at Ever Bar / Klimpton Everly

Then I headed over to the official Miracle popup bar at the Ever Bar at the Klimpton Everly Hotel in Hollywood.

I don’t want to spoil the decor but it’s really wonderful and I loved how pretty the bar looked all lit up with Christmas lights.

Christmas Carol Barrel at Ever Bar

Our favorite drink of the night was the Christmas Carol Barrel. I love tiki drinks and rum barrels is one of those great drinks. This is a take with pumpkin pie and aquavit along with rum.

drinks at Ever Bar

We also tried a couple of other drinks. My friend had the Snowball Old Fashioned and I had the And a Partridge in a Pear Tree. I love my whiskey but sometimes I want something a little bit different. This tequila and mezcal drink along with pear brandy is the perfect antidote of the whiskey holiday blues.

Ever Bar at the Klimpton Everly Hotel

Miracle bar popup until the end of the month

While Miracle at Ever Bar is the “official” holiday popup bar, that doesn’t mean other bars haven’t decorated for the holidays and many more I didn’t go to are similarly festive. I hear Seven Grand, Big Bar and a slew of others have holiday themed drinks. Christmas may be days away but many bars will be running these holiday offerings until New Year’s Eve!

I’ll see you at Big Bar New Year’s Eve! Starting at 3 p.m. there will be a special cocktail dedicated to the time zone celebrating the new year culminating at midnight for a toast to Los Angeles!

One thought on “Holiday Themed Bars in Los Angeles”