On Friday, I picked up Mozza2Go with the gay boyfriend. I was excited to see him and hear all about his vacation to Toronto and Montreal.

He told me he met the one. The one he’s going to marry. He didn’t use the phrase soul mate but I heard it anyway.

The gay boyfriend is a very practical guy. He has never said this about anyone. He met his new, er, friend on the first night and subsequently spent every day with him. As I listened and ate my lasagna, I couldn’t help but feel a twinge of jealousy.

I wanted to be in love, too!

And for some odd reason, I didn’t think this whole soul mate/ the one thing actually exists. Sure, people talk about it but that’s usually in the movies. But to hear him say it made me think, “woah, there’s still time!”

So, maybe I should go to Canada?

I did however, head out to the Camera Assassins singles party. It was part digital photo scavenger hunt and assassins. My target was rather cute but he was very hurt when I “killed” him and he didn’t get past that when I tried to chat him up at the mixer later.

My partner and I won the game that day so we’re in for the next event. Most likely, it’ll be Clockwise but I’ll update with a link and date when it’s set.

As for the rest of the Mozza2Go, the chicken livers were great. I also liked the eggplant caponata and of course the sausage fennel pizza is a must. I tried the butterscotch budino as well and it was love at first bite. 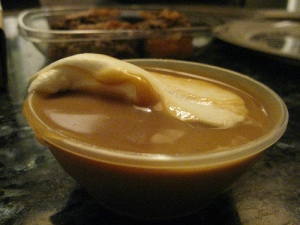 At least some things are certain.